It seems right now as if everyone has an opinion on the Occupy Wall Street (OWS) movement, which has gone nationwide in America and spread to many cities worldwide. OWS has incited praise, rage, donations, police crackdowns, hilarity, and kickstarted a new round of American political conversation. There have been many attempts in the media to understand the motivations behind the movement, and most of them, like this New York Times article, center on the perceived “anger” of the demonstrators. But what is the driving force behind OWS? 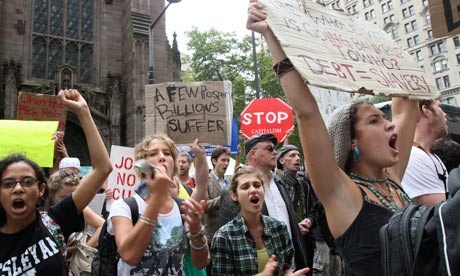 As you have undoubtedly heard, America is undergoing a massive demographic redistribution of wealth. The middle class seems to be shrinking for the first time in many decades. American industry and the prosperity that came with it had built a large and robust middle class by the end of World War II, a condition testifying to the reality of the American Dream. This, combined with the social entitlements of the Roosevelt era such as Social Security, ensured that the majority of Americans lived comfortable lives. By the 1960s, then, the expectations of average Americans had drastically expanded. Most people expected their children go to college, own homes, and have a much better quality of life then they themselves had had. As credit became increasingly more available to the public in the 1970s, 80s, and 90s, many Americans thought that it could help push them to upper-middle-class status even more quickly. Everyone seemed to get wealthier, at least until the bottom fell out of the credit bubble, and we all realized that we had been playing at prosperity.

And this is where the psychology gets interesting. In 1980, American economist Richard Thaler theorized that people value something more when they own it than when they do not. We think our stuff is worth more simply because it is ours. In Thaler’s classic experiment, researchers randomly divided participants into buyers and sellers. Sellers were given a coffee mug, and buyers were asked how much they would be willing to pay for the mug. The highest price offered was $2.87. The sellers, however, asked $7.12 for the mug. The mere ownership of the mug had magically doubled its perceived value to the owner. Thaler proposed that this difference was due to loss aversion: the fact that humans strongly prefer to avoid losing something they already have to acquiring something new. Just watch any episode of Hoarders.

The endowment effect means is that it is much easier to not give somebody something in the first place than to take it away from them later. People find it relatively easy to accept the status quo, but after their lives have gotten much better, its upsetting to have those gains scaled back or taken away.

Exit Dreams, Pursued by a Bear

We are now in the third year of the largest economic downturn since the Great Depression. In September of this year, unemployment was at 9.1 percent, down a bit from its high of 10.1 percent in October of 2009. Last week the “misery index”— a combination of unemployment and inflation scores— hit its highest level in 28 years. People who want work cannot find it, many are living with their parents, and unemployment benefits are getting slashed. This is not what we have been lead to expect for the past fifty years. The Millennials (just to take the most recent example) were raised with a tremendous sense of entitlement, equal parts MTV Cribs and participation trophies, and expected that upon graduation the world would present to them their very own oyster. Getting rich without much effort, a la Zuckerberg, was the aspiration: an embodiment of Millennial optimism.

And then there came the global economic meltdown, the country on course for bankruptcy, and a loss of jobs. People lost the homes they had bought during the boom, people lost the jobs (such as construction) that had increased their standard of living, and the Millennials lost the golden future they had been promised. College grads living in their parents’ basements, groaning under the weight of unpayable school loans have become the norm.

Regardless of your personal views on the OWS movement—which you may see as populated by anything from “heroes” to “demonic loons”—or the validity of its political basis, it is easy to understand the source of the emotion underlying the movement. These are people who are not enjoying the lives they were told they were going to have. It doesn’t matter that those dreams were an illusion based on easy credit, the real estate bubble, and student loans, only that they seemed real. The deep hardwired parts of our brains don’t know the difference; we just hate to lose something we feel we have already gained.