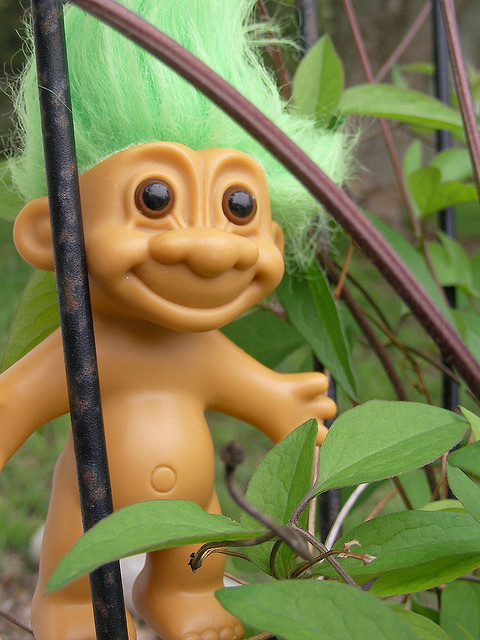 Michael Brutsch appeared to be an upstanding citizen.

He is the father of a teenage son who joined the Marines, loves cats, and lives with his disabled wife in Arlington, TX. As a programmer for a financial services company, he punched the clock daily and paid his bills.

Yet behind this normal, even bland, exterior lives a monster, famous for being one of the most vile people on the entire Internet (which, as you may guess, is saying a lot). As the troll codenamed Violentacrez on social news site Reddit, Brutsch was responsible for some of the most disgusting, prurient, and transgressive content on a site that already pushes the boundaries for a living.

He delighted in posting provocative photographs of underage girls (in a section called “Jailbait” which became the most popular area of Reddit), as well as creating a clearinghouse for voyeuristic shots of unintentional nudity. He was responsible for other sections on Reddit with names like Chokeabitch, Niggerjailbait, Rapebait, Hitler, Jewmerica, Misogyny, and Incest. You get the picture.

This past week, Brutsch’s worst nightmare came true when his Reddit identity was discovered by a journalist and he was publicly outed. He's lost his job and thousands of Internet users are reveling in his downfall. Yet Brutsch could only do what he did because he was able to do it anonymously.

Anonymity is a new thing for humans. For the vast majority of our evolutionary history, we lived in small groups where, like that famous bar, everyone knew your name. In these tribal bands, to disregard social norms was to risk death by exile or direct violence. But as cities grew into civilizations and media technologies developed and spread, suddenly human beings had access to something new: the ability to be no one in particular. Anonymity frees us to be truly honest, without fear of reprimand or repercussion—hence the popularity of the anonymous confessional on sites like Reddit and Metafilter. And, at its most extreme, this sort of Internet anonymity allows us to become something more than honest: it can create trolls.

The troll is the ultimate cheater, because he or she is cheating at being a decent person, i.e. the sort of person who conforms to basic social norms. This kind of cheating matters to us because decency is the key to accessing a lot of fundamental social respect: the ability to have a good job, have your neighbors treat you well, have societal institutions deal with you fairly, and so forth. It is incredibly useful for a human being to be seen as a decent member of society, which is why we all strive so hard to protect that image of ourselves.

There are many things we might like to do which we don’t do because it would compromise our standing. But cheaters like Brutsch try to have their cake and eat it too. They work hard to project the image of decency in their everyday life, while all the while taking actions that are utterly unacceptable to society or even sometimes illegal.

The story of Brutsch’s involuntary unmasking is burning up the Internet. We are enthralled by the outing of an anonymous rule-breaker. Why? Because our evolution as cooperative animals absolutely requires it. Cooperation was for a long time a mystery in evolution. Natural selection as Darwin modeled it was based on competition—the survival of the fittest—not cooperation. In this model the strong would always prey on the weak, and no group cohesion was possible. Then in the 1960s and 70s two new theories offered ways to scientifically understand cooperation. One, called kin selection, demonstrated that we could afford to cooperate with family members, because we share a lot of the same genes. The other, called reciprocal altruism, showed that it even made evolutionary sense to help strangers (people with whom we share very few genes), as long as there was the likelihood of strangers helping us sometime in the future.

Both of these theories are described by concise mathematical expressions, and the one thing required for them to work—that is, to lead to a cooperative society—is a vigorous persecution of cheaters. Thus, human beings and human society evolved with a strong drive to unmask and punish those who aren’t following the rules. Any human group that didn’t have such a drive has long since ceased to be a group; it would have been driven out of business, so to speak, by cheaters sucking up all the resources and contributing nothing.

While Internet anonymity has been incredibly beneficial for societies in some ways (like the upwelling of freedom during the Arab Spring), it has also given rise to a whole new bestiary of bad actors: spammers, hackers, griefers, stalkers, fakers, and trolls. Anonymity can cause a psychological condition called “deindividuation” in which people lose their sense of self and responsibility. It’s similar to mob behavior, and can turn, well, a mild mannered computer programmer into a notorious creep. Once the healthy social checks and balances are removed, people can act out in astonishingly destructive ways. Or, sometimes, in particularly sad and creepy ways, like Brutsch.

When the reporter who outed Brutsch called him and told him about his impending unmasking, Brutsch was under no illusions about how important it was that he stay anonymous. He begged the reporter not to reveal his name, saying that it would negatively affect his job and his "real" life. The anonymous folks of the Internet call this piecing together of personal info "doxxing" and fear it, while many of the rest of us revel in the outing of trolls. The story of Violentacrez has been framed as a question of free speech and privacy. But when you go deeper it becomes a question of how human society cooperates in spite of all the things we would do if nobody knew.

As social media de-anonymizes much of the Internet, do you find interactions online changing? Share your stories and opinions in the comments!

This article originally appeared on Being Human