The transition from an ice age to an ice-free planet 300 million years ago was highly unstable, marked by dips and rises in carbon dioxide, extreme swings in climate and drastic effects on tropical vegetation.

"This is the best documented record we have of what happens to the climate system during long-term global warming following an ice age," said Isabel Montañez, professor of geology at the University of California, Davis, and lead author on the paper. But she added that these findings cannot be applied directly to current global warming trends.

In the mid-Permian, 300 million years ago, the Earth was in an ice age. Miles-thick ice sheets covered much of the southern continent, and floating pack ice likely covered the northern polar ocean. The tropics were dominated by lush rainforests, now preserved as coal beds. 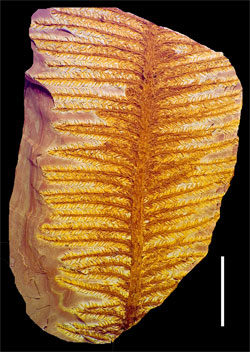 This fossil shows the Walchia, a Permian conifer that migrated from uplands into the lowland basins when the world changed to warmer drier climates. (Museum of Natural History, Smithsonian Institution)

Forty million years later, all the ice was gone. The world was a hot, dry place, vegetation was sparse, soils little more than drifts of wind-blown dust.

"You'd have to be a reptile to want to live there," Montañez said.

Montañez and her co-authors derived records of atmospheric carbon dioxide from ancient soils that have been preserved as rocks, from coal and from fossils of plants. They extracted a record of sea surface temperatures from the fossils of brachiopod shellfish and looked at the extensive records of past plant life from fossils of the ancient rainforests. To see how the glaciers advanced and retreated, they looked at the scars and clues left by ice sheets that once covered the great southern continent of Gondwanaland, which included most of the land masses of the modern southern hemisphere.

They placed statistical constraints on their data with computer modeling by Deb Niemeier, professor of civil and environmental engineering and director of the John Muir Institute of the Environment at UC Davis.

The new data show that throughout millions of years, atmospheric carbon dioxide levels swung back and forth between about 250 parts per million, close to present-day levels, to more than 2,000 parts per million. At the same time, the southern ice sheets retreated as carbon dioxide rose and expanded again when levels fell, a pattern compatible with the idea that greenhouse gases caused the end of the late Paleozoic ice age.

"We can see a pattern of increasing carbon dioxide and increasing temperatures, with a series of rises and dips," Montañez said.

Scientists had assumed that as the climate warmed, a tipping point would be reached at which the ice sheets would melt rapidly and for good. Instead, the new data shows that the climate went back and forth between the extremes. But the overall trend was to warming, and by 260 million years ago, the ice sheets were gone.

Records of fossil plants show rapid changes in tropical plant communities as the climate changed. On scales of a few thousand years, lush forests of tree ferns in cool, wet periods alternated with conifers and other plants adapted to a harsher, drier and warmer climate.

"The Permian greenhouse is the only record we have of the transition from an ice age to an ice-free climate on a vegetated planet," Montañez said. But instead of a smooth shift, the transition occurred in a series of sharp swings between cold and hot conditions, occurring during perhaps a half-million to few million years.

But Montañez pointed out that these results cannot be directly applied to current global warming. The current rise in atmospheric carbon dioxide is occurring throughout a much shorter timescale, for one thing. But the current work does show that such a major change in climate will likely not proceed in small, gradual steps, but in a series of unstable, dramatic swings. While these data cover millions of years, similar events might take place during a much shorter time span.

"Perhaps this is the behavior one should expect when we go through a major climate transition," Montañez said.

Further, the record of fossil plants shows the drastic effects of major climate change on living things. In the modern era, tropical forests are already stressed by human use and settlement, and ecological researchers have recorded species moving north or south, likely driven by current global warming.

The other authors on the paper are: Neil Tabor, Southern Methodist University, Dallas, a former graduate student with Montañez; William DiMichele, Smithsonian Museum of Natural History; Tracy Frank, Christopher Fielding, Lauren Birgenheier and Michael Rygel, University of Nebraska-Lincoln; and John Isbell, University of Wisconsin-Milwaukee. The work was funded by the National Science Foundation.