While government leaders argue about the practicality of reducing world emissions of carbon dioxide, scientists and engineers are seeking ways to make it happen.

One group of engineers at MIT decided to focus its work on the nanostructure of concrete, the world's most widely used material. The production of cement, the primary component of concrete, accounts for 5 to 10 percent of the world's total carbon dioxide emissions; the process is an important contributor to global warming. 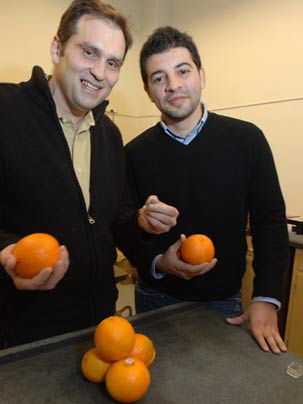 MIT Professor Franz-Josef Ulm and post-doc Georgios Constantinides have shown that the strength of concrete lies in the way its nanoparticles are organized -- like oranges stacked in a supermarket. Their findings could lead to a reduction in carbon dioxide emissions during concrete manufacturing. Photo / Donna Coveney

In the January issue of the Journal of the Mechanics and Physics of Solids, the team reports that the source of concrete's strength and durability lies in the organization of its nanoparticles. The discovery could one day lead to a major reduction in carbon dioxide emissions during manufacturing.

"If everything depends on the organizational structure of the nanoparticles that make up concrete, rather than on the material itself, we can conceivably replace it with a material that has concrete's other characteristics-strength, durability, mass availability and low cost-but does not release so much CO2 into the atmosphere during manufacture," said Franz-Josef Ulm, the Esther and Harold E. Edgerton Professor of Civil and Environmental Engineering.

The work also shows that the study of very common materials at the nano scale has great potential for improving materials in ways we might not have conceived. Ulm refers to this work as the "identification of the geogenomic code of materials, the blueprint of a material's nanomechanical behavior."

He and Georgios Constantinides, a postdoctoral researcher in materials science and engineering, studied the behavior of the nanostructure of cement. They found that at the nano level, cement particles organize naturally into the most densely packed structure possible for spherical objects, which is similar to a pyramid-shaped pile of oranges.

Cement, the oldest engineered construction material, dating back to the Roman Empire, starts out as limestone and clay that are crushed to a powder and heated to a very high temperature (1500 degrees Celsius) in a kiln. At this high temperature, the mineral undergoes a transformation, storing energy in the powder. When the powder is mixed with water, the energy is released into chemical bonds to form the elementary building block of cement, calcium-silicate-hydrate (C-S-H). At the micro level, C-S-H acts as a glue to bind sand and gravel together to create concrete. Most of the carbon dioxide emissions in this manufacturing process result from heating the kiln to a temperature high enough to transfer energy into the powder.

Ulm and Constantinides gathered a wide range of cement pastes from around the world, and, using a novel nano-indentation technique, poked and prodded the hardened cement paste with a nano-sized needle. An atomic force microscope allowed them to see the nanostructure and judge the strength of each paste by measuring indentations created by the needle, a technique that had been used before on homogenous materials, but not on a heterogeneous material like cement.

To their surprise, they discovered that the C-S-H behavior in all of the different cement pastes consistently displays a unique nanosignature, which they call the material's genomic code. This indicates that the strength of cement paste, and thus of concrete, does not lie in the specific mineral, but in the organization of that mineral as packed nanoparticles.

The C-S-H particles (each about five nanometers, or billionths of a meter, in diameter) have only two packing densities, one for particles placed randomly, say in a box, and another for those stacked symmetrically in a pyramid shape (like a grocer's pile of fruit). These correspond exactly to the mathematically proved highest packing densities allowed by nature for spherical objects: 63 and 74 percent, respectively. In other words, the MIT research shows that materials pack similarly even at the nano scale.

"The construction industry relies heavily on empirical data, but the physics and structure of cement were not well understood," said Constantinides. "Now that the nano-indentation equipment is becoming more widely available-in the late 1990s, there were only four or five machines in the world and now there are five at MIT alone-we can go from studying the mechanics of structures to the mechanics of material at this very small scale."

If the researchers can find-or nanoengineer-a different mineral to use in cement paste, one that has the same packing density but does not require the high temperatures during production, they could conceivably cut world carbon dioxide emissions by up to 10 percent.

This aspect of the work is just beginning. Ulm estimates that it will take about five years, and says he's presently looking at magnesium as a possible replacement for the calcium in cement powder. "Magnesium is an earth metal, like calcium, but it is a waste material that people must pay to dispose of," he said.

He recently formed a research team with colleagues in physics, materials science and nuclear engineering to perform atomistic simulations, taking the work a step deeper into the structure of this ubiquitous material.

The research was funded in part by the Lafarge Group.