The Six Billion Dollar Man is getting a little bit closer, not just to movie theaters, but in real life.

A new development toward a prosthetic retina could help counter conditions that result from retinal degeneration, a life-altering health issue for many people, especially as they age.

Yael Hanein and colleagues point out that a growing range of medical devices has become available to treat conditions, including visual impairment, that involve sending sensory signals to the brain. Patients with one type of eye disorder called age-related macular degeneration (AMD), for example, could potentially benefit from such a device, they say. AMD usually affects people age 60 or older who have damage to a specific part of the retina, limiting their vision. 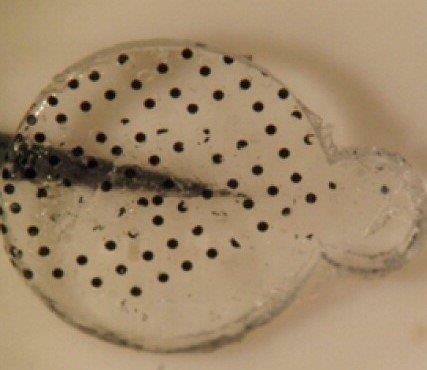 Scientists are trying different approaches to develop an implant that can "see" light and send visual signals to a person's brain, countering the effects of AMD and related vision disorders. But many attempts so far use metallic parts, cumbersome wiring or have low resolution. The researchers, an interdisciplinary team from Tel Aviv University, the Hebrew University of Jerusalem Centers for Nanoscience and Nanotechnology and Newcastle University, wanted to make a more compact device.

The researchers combined semiconductor nanorods and carbon nanotubes to create a wireless, light-sensitive, flexible film that could potentially act in the place of a damaged retina. When they tested it with a chick retina that normally doesn't respond to light, they found that the film absorbed light and, in response, sparked neuronal activity.

In comparison with other technologies, the researchers conclude theirs is more durable, flexible and efficient, as well as better able to stimulate neurons.

The new device was tested on tissue from laboratory animals and research is ongoing.