Biofuels have been an increasingly hot topic on the discussion table in the last few years. In 2003 the European Union introduced a Directive suggesting that Member states should increase the share of biofuels in the energy used for transport to 2% by 2005 and 5.75% by 2010. In 2005 the target was not reached and it will probably not be reached in 2010 either (we are in 2006 at approximately 0.8%), but anyway the Directive showed the great interest that the European Commission places on biofuels as a way to solve many problems at once. The new European energy strategy, presented on 10th January 2007, establishes that biofuels should represent at least 10% of the energy used for transport. 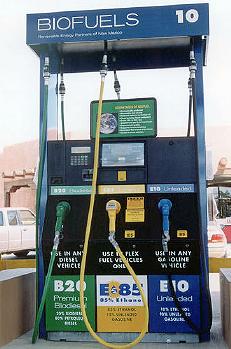 Biofuels are not competitive with fossil fuel-derived products if left to the market. In order to make their price similar to those of petrol and diesel, they need to be subsidized. In Europe, biofuels are subsidized in three ways: 1) agricultural subsidies, mainly granted within the framework of the Common Agricultural Policy; 2) total or partial de-taxation, which is indispensable, because energy taxes account for approximately half of the final price of petrol and diesel; 3) biofuels obligations, which establish that the fuels sold at the pump must contain a given percentage of biofuels.

These three political measures need financial means, which are paid for by the European Commission (agricultural subsidies), by the governments (reduced energy revenues), and by car drivers (increase in the final fuel price). For this reason, an integrated analysis is needed in order to discuss whether investing public resources in biofuels and employing a large extension of agricultural land is the most advisable strategy to solve the problems associated with fossil fuels.

The main argument behind the policies in favour of biofuels is based on the idea that biofuels would not increase the concentration of greenhouse gases in the atmosphere. In fact, the amount of carbon dioxide emitted by biodiesel in the combustion phase is the same as that absorbed by the plant during its growth through photosynthesis, resulting in a neutral carbon budget. Moreover, substituting part of the oil products with biofuels would reduce the European energy dependency and increase energy security.

However, a more careful analysis of the life cycle of biodiesel reveals that the energy (and CO2) savings is not so high as it might seem at first sight, and in some cases might even be negative. In fact, the raw materials for biofuels are normally obtained with intensive agriculture, which imply a high use of fertilizers, pesticides and machinery. The reason is that, with less intensive agricultural methods, the yield would be lower and the land requirement and the costs would be higher. Also, fossil fuels are used in the processing phase (oil pressing, trans-esterification) and for transporting the oil seeds to the processing plant and from there to the final users.

In any case, even if the objective of the Directive were met, the savings would not be significant. In fact, since the transport sector accounts for 30% of the final energy consumption, the 5.75% of the fuels for transport corresponds to 1.8% of the final consumption. Taking into account that this amount requires the indirect use of fossil fuels, the final savings would be even lower.

For example, considering a very optimistic output/input ratio (the biodiesel produced using one unit of fossil fuels) of 2.5 , we obtain that reaching the 5.75% percentage (approximately 20 million tons of oil equivalent) would imply saving around 36 million tons of CO2 equivalent, i.e., less than 1% of the European Union emissions in 2004 (4,228 million tons CO2) If we take into account the emissions related to the transport of raw materials that are imported and the imports of food crops that would be substituted by energy farming, the savings would be even less, and if the oil seeds are imported from outside Europe possibly even negative.

Another point that is often raised to promote biofuels is urban pollution. Biofuels are not only seen as a "green" fuel on a global scale (reduction of greenhouse effect) but also on a local scale. They would contribute to reducing traffic contamination, and therefore the numerous ailments associated with it. In reality, the advantages from this point of view are very modest. For example, according to a study of the USA Environmental Protection Agency (2002), if diesel is replaced with a blend of 20% biodiesel (B20), Nitrogen Oxides (NOx) would increase by 2%, particulate matter (PM), unburnt Hydrocarbons (HC) and Carbon Monoxide (CO) would decrease by respectively 10.1%, 21.1% and 11% . Therefore, it can be assumed that with a 5.75% blend, the reduction in PM, HC and CO would be respectively 3%, 6% and 3% (and the increase in NOx would be negligible).

Against the modest advantages (a small substitution of fossil fuels and a slight reduction of some contaminants with respect to diesel), the disadvantages of a large-scale biodiesel production are apparent.

Due to the low yield, the land requirement is enormous. In the Biomass Action Plan (Annex 11) it is calculated that in order to achieve the 5.75% target (18.6 million toe biofuels), about 17 million hectares would be needed, i.e. one fifth of the European tillable land (97 million hectares). Since there is not so much marginal and abandoned land in Europe, the consequence would be the substitution of food crops and a huge increase of the food imports.

For this reason, both in the Biomass Action Plan and in the EU Strategy for Biofuels it is stressed that Europe will promote the production of raw material for biofuels in extra-European countries, where the European Commission intends to incentive energy farming.

This means that the impacts of energy farming would be exported to Southern countries. It is easily foreseeable that if the European demand for biofuels increased because of biofuel obligations and other supporting policies, Southern countries may be stimulated to replace if not food crops at least native forests with large monocultures.

Energy farming would presumably have a big role in deforestation, because pristine forests would be cut down in order to cultivate energy crops. The consequences would be, besides a worrying reduction of wild biodiversity, a decrease in soil fertility, water availability and quality, and an increase in the use of pesticides and fertilizers, as well as negative social effects like potential dislocation of local communities.

The European Directive, and in general all biodiesel promoting policies, do not only imply a competition for arable land but might also incentive plantations of palm trees, whose oil is cheaper than any other source. Palm plantations are responsible for most deforestation in South Eastern Asia and represent a real threat to the remaining native forests. Also they are responsible for a high soil erosion rate. For example, between 1985 and 2000 in Malaysia palm plantations caused 87% of the total deforestation and further 6 million hectares will be deforested to make room for palm trees . The same more or less applies to sugarcane plantations in Brazil.

Moreover, taking into account the CO2 emissions due to inter-continental transport and the increase of CO2 in the atmosphere due to deforestation (forests are CO2 sinks), the final result might be an overall increase of the greenhouse emissions instead of the whished reduction.

Another possible negative consequence is a reduction in world food availability, which can be a particularly serious problem in a context of increasing population and energy demand. A recent example is the increase in corn price in Mexico by 30% in early 2007, caused by the growing demand for corn-derived bioethanol in the USA (Mexico is a net importer of corn from the USA). Some use the term "ethanolinflation" .

Also, a large scale biodiesel production would imply a strong environmental impact in the agricultural phase: the huge monocultures of energy crops would dramatically reduce agricultural biodiversity, with strong environmental impact in terms of soil erosion, use of fertilizers and pesticides, and water requirement. Also, one of the consequences may be an increase in the use of GMOs. In fact, soybean, maize and rapeseed (among the most used raw material to produce biofuels) are respectively the first, second and fourth most important GMO crops.

Another argument often used in favour of biofuels is rural development. However, it can be argued that support to biofuels should not be used as agricultural subsidies. If the objective is to support agricultural sector, subsidies should be granted to organic agriculture and landscape protection.

Concluding, using public funding to support a large scale biofuel production is not an advisable strategy. Obviously, these considerations do not apply to used oil or agricultural residue recycling, nor small-scale niche productions, all of which may be good strategies, instead.

Summing up, biodiesel cannot contribute to the solution of the problems related to the high dependency of our economy on fossil fuels. The idea that biodiesel could be a solution for the energy crisis is not only false, but also dangerous. In fact, it might favour an attitude of technological optimism and faith in a technological fix of the energy problem. We should never forget that if we want to reduce the use of fossil fuels there is no magic wand: the only possible solution is to modify consumption patterns.

Written from a news release by Universitat Autonoma de Barcelona.