Focus on greenhouse gases in the atmosphere has led to a lot of confusion among the public: bad storms are caused by global warming but a lack of warming is not.

There may be a reason things don't add up, according to a paper in Science. The circulation of the ocean plays an equally important role in regulating the earth's climate, it finds. In their study, the researchers say the major cooling of Earth and continental ice build-up in the Northern Hemisphere 2.7 million years ago coincided with a shift in the circulation of the ocean – which pulls in heat and carbon dioxide in the Atlantic and moves them through the deep ocean from north to south until it's released in the Pacific.

The ocean conveyor system, they believe, changed at the same time as a major expansion in the volume of the glaciers in the northern hemisphere as well as a substantial fall in sea levels. It was the Antarctic ice, they argue, that cut off heat exchange at the ocean's surface and forced it into deep water. They believe this caused global climate change at that time, not carbon dioxide in the atmosphere. 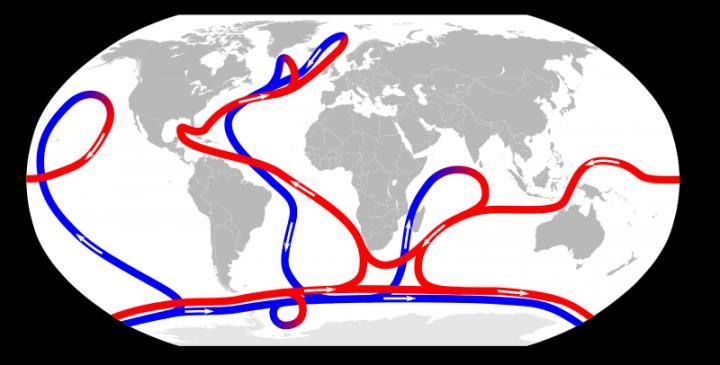 "We argue that it was the establishment of the modern deep ocean circulation – the ocean conveyor – about 2.7 million years ago, and not a major change in carbon dioxide concentration in the atmosphere that triggered an expansion of the ice sheets in the northern hemisphere," says Stella Woodard, lead author and a post-doctoral researcher in the Department of Marine and Coastal Sciences. Their findings, based on ocean sediment core samples between 2.5 million to 3.3 million years old, provide scientists with a deeper understanding of the mechanisms of climate change today.

The study shows that changes in heat distribution between the ocean basins is important for understanding future climate change. However, scientists can't predict precisely what effect the carbon dioxide currently being pulled into the ocean from the atmosphere will have on climate. Still, they argue that since more carbon dioxide has been released in the past 200 years than any recent period in geological history, interactions between carbon dioxide, temperature changes and precipitation, and ocean circulation will result in profound changes.

Scientists believe that the different pattern of deep ocean circulation was responsible for the elevated temperatures 3 million years ago when the carbon dioxide level in the atmosphere was arguably what it is now and the temperature was 4 degree Fahrenheit higher. They say the formation of the ocean conveyor cooled the earth and created the climate we live in now.

"Our study suggests that changes in the storage of heat in the deep ocean could be as important to climate change as other hypotheses – tectonic activity or a drop in the carbon dioxide level – and likely led to one of the major climate transitions of the past 30 million years," says Yair Rosenthal, co-author and professor of marine and coastal sciences at Rutgers.