Fewer cords, smaller antennas and quicker video is the goal of a microwave circuit that has set a new world record for data transmission.

As we all know, watching a film clip on a tablet or phone us a lot more than pressing 'play' - the data must reach us quickly via a long series of devices, antennas and receivers. With an increasing number of users, higher demands on image quality and more wireless systems, producing methods for transmitting the enormous amounts of data through the air with the right speed poses a major challenge.

The solution might be to use higher frequencies than today, from 100 Gigahertz and higher, since this would give access to a larger band of empty frequencies, enabling a higher data rate. Researchers all over the world are working to produce data circuits that can transmit and receive signals that are strong enough at higher frequencies. A Swedish group from Chalmers University of Technology and Ericsson has already been successful. 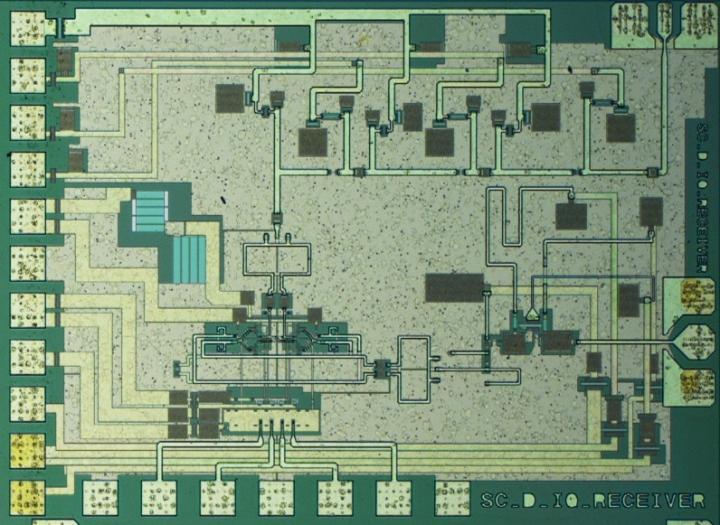 140 GHz transmitter chip, containing an I-Q modulator, a 3-stage amplifier, and a x3 frequency multiplier for the local oscillator. The chip was designed by Sona Carpenter, Herbert Zirath, and Mingquan Bao. Data-transmission measurements was done by Simon He. The chip size is 1.6x1.2 mm2. Credit: Sona Carpenter

"We have designed circuits for signals at 140 Gigahertz, where we have a large bandwidth. In laboratory testing, we have achieved a transmission rate of 40 Gigabit data per second, which is twice as fast as the previous world record at a comparable frequency," says Herbert Zirath, a professor in high speed electronics at Chalmers who also works at Ericsson.

Zirath says that semiconductor materials development has enabled manufacture of circuits that can transmit high frequency signals with sufficiently high power. The circuits, which are made of the semiconductor material indium phosphide, are so small that a microscope is needed to distinguish the details.

Some of the applications for quicker wireless data transmission that Zirath envisions include major cultural and sports events where high-resolution live films need to be transmitted to screens without any delay or long cables, and communication within and between the large computer rooms where our digital files end up when we place them in "the cloud". Improved wireless transmission can also mean fewer cords in our homes and at our workplaces. The quick circuits are of interest to Ericsson in terms of transmitting signals to and from base stations and cellular towers.

"This is a very exciting area to be involved in, since the heavily increasing amount of data demands new solutions all the time. The fact that an increasing number of people are watching films wirelessly is the primary reason underlying the need for quicker transmission today."

Even though there are many aspects that have to fall into place for successful data transmission, Zirath believes that within a few years, the project can demonstrate wireless data transfer of 100 Gigabit per second.

"I believe it is only a matter of a couple of years before our circuits will be used in practical applications."