News Staff
80 percent of patients survive when kidney cancer is detected early - but it is often not easy. However, finding it early has been among the disease's greatest challenges.

Kidney cancer is the seventh most common cancer in men and the 10th most common in women, affecting about 65,000 people each year in the United States. About 14,000 patients die of the disease annually. Like most cancers, kidney tumors are easier to treat when diagnosed early. But symptoms of the disease, such as blood in the urine and abdominal pain, often don't develop until later, making early diagnosis difficult.

Now, researchers have developed a noninvasive method to screen for kidney cancer that involves measuring the presence of proteins in the urine. They found that the protein biomarkers were more than 95 percent accurate in identifying early-stage kidney cancers. In addition, there were no false positives caused by non-cancerous kidney disease. 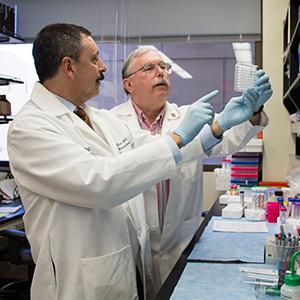 "These biomarkers are very sensitive and specific to kidney cancer," said senior author Evan D. Kharasch, MD, PhD, of Washington University School of Medicine in St. Louis. "The most common way that we find kidney cancer is as an incidental, fortuitous finding when someone has a CT or MRI scan. It's not affordable to use such scans as a screening method, so our goal has been to develop a urine test to identify kidney cancer early."

When kidney cancer isn't discovered until after it has spread, more than 80 percent of patients die within five years.

With researchers from the Siteman Cancer Center, the Mallinckrodt Institute of Radiology and the Division of Urologic Surgery, Kharasch and principal investigator Jeremiah J. Morrissey, PhD, professor of anesthesiology, analyzed urine samples from 720 patients at Barnes-Jewish Hospital who were about to undergo abdominal CT scans for reasons unrelated to a suspicion of kidney cancer. Results of the scans let the investigators determine whether or not patients had kidney cancer. As a comparison, they also analyzed samples from 80 healthy people and 19 patients previously diagnosed with kidney cancer.

In addition, three of the 720 patients who had abdominal CT scans also had elevated levels of both proteins. Two of those patients were diagnosed subsequently with kidney cancer, and the third patient died from other causes before a diagnosis could be made.

"Each protein, or biomarker, individually pointed to patients who were likely to have kidney cancer, but the two together were more sensitive and specific than either by itself," said Morrissey. "When we put the two biomarkers together, we correctly identified the patients with kidney cancer and did not have any false positives."

Even when patients had other types of non-cancerous kidney disease, levels of the two proteins in the urine were not elevated and did not suggest the presence of cancer.

"Patients with other kinds of cancer or other kidney diseases don't have elevations in these biomarkers," Kharasch said. "So in addition to being able to detect kidney cancer early, another advantage of using these biomarkers may be to show who doesn't have the disease."

Not all kidney masses found by CT scans turn out to be cancerous, he said. In fact, about 15 percent are not malignant.

"But a CT scan can only tell you whether there is a mass in the kidney, not whether it's cancer," Kharasch said. "Currently, the only way to know for sure is to have surgery, and unfortunately, 10 to 15 percent of kidneys removed surgically turn out to be normal."

Kharasch and Morrissey are working to develop an easy-to-use screening test for kidney cancer, much like mammograms, colonoscopies or other tests designed to identify cancer at early, more treatable stages before patients have symptoms.

"By and large, patients don't know they have kidney cancer until they get symptoms, such a blood in the urine, a lump or pain in the side or the abdomen, swelling in the ankles or extreme fatigue," Morrissey said. "And by then, it's often too late for a cure. Metastatic kidney cancer is extremely difficult to treat, and if the disease is discovered after patients have developed symptoms, they almost always have metastases. So we're hoping to use the findings to quickly get a test developed that will identify patients at a time when their cancer can be more easily treated."