News Staff
Maybe fat gets a bad rap. Immune responses matter but when it comes to skin infections, those response may depend greatly upon what lies beneath, according to a paper published in Science. Fat cells below the skin help protect us from bacteria, they write.

Richard Gallo, MD, PhD, professor and chief of dermatology at UC San Diego School of Medicine, and colleagues have uncovered a previously unknown role for dermal fat cells, known as adipocytes: They produce antimicrobial peptides that help fend off invading bacteria and other pathogens.

The human body’s defense against microbial infection is complex, multi-tiered and involves numerous cell types, culminating in the arrival of neutrophils and monocytes – specialized cells that literally devour targeted pathogens. But before these circulating white blood cells arrive at the scene, the body requires a more immediate response to counter the ability of many microbes to rapidly increase in number. That work is typically done by epithelial cells, mast cells and leukocytes residing in the area of infection. 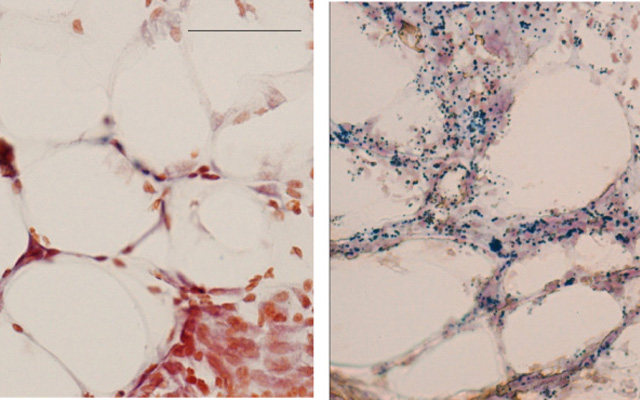 “It was thought that once the skin barrier was broken, it was entirely the responsibility of circulating (white) blood cells like neutrophils and macrophages to protect us from getting sepsis,” said Gallo, the study’s principal investigator. “But it takes time to recruit these cells (to the wound site). We now show that the fat stem cells are responsible for protecting us. That was totally unexpected. It was not known that adipocytes could produce antimicrobials, let alone that they make almost as much as a neutrophil.”

Staphylococcus aureus is a common bacterium and major cause of skin and soft tissue infections in humans. The emergence of antibiotic-resistant forms of S. aureus is a significant problem worldwide in clinical medicine.

Prior published work out of the Gallo lab had observed S. aureus in the fat layer of the skin, so researchers looked to see if the subcutaneous fat played a role in preventing skin infections.

Ling Zhang, PhD, the first author of the paper, exposed mice to S. aureus and within hours detected a major increase in both the number and size of fat cells at the site of infection. More importantly, these fat cells produced high levels of an antimicrobial peptide (AMP) called cathelicidin antimicrobial peptide or CAMP. AMPs are molecules used by the innate immune response to directly kill invasive bacteria, viruses, fungi and other pathogens.

“AMPs are our natural first line defense against infection. They are evolutionarily ancient and used by all living organisms to protect themselves,” said Gallo.

“However, in humans it is becoming increasingly clear that the presence of AMPs can be a double-edged sword, particularly for CAMP. Too little CAMP and people experience frequent infections. The best example is atopic eczema (a type of recurring, itchy skin disorder). These patients can experience frequent Staph and viral infections. But too much CAMP is also bad. Evidence suggests excess CAMP can drive autoimmune and other inflammatory diseases like lupus, psoriasis and rosacea.”

The scientists confirmed their findings by analyzing S. aureus infections in mice unable to either effectively produce adipocytes or whose fat cells did not express sufficient antimicrobial peptides in general and CAMP in particular. In all cases, they found the mice suffered more frequent and severe infections.

Further tests confirmed that human adipocytes also produce cathelicidin, suggesting the immune response is similar in both rodents and humans. Interestingly, obese subjects were observed to have more CAMP in their blood than subjects of normal weight.

The potential clinical applications of the findings will require further study, said Gallo.

“Defective AMP production by mature adipocytes can occur due to obesity or insulin resistance, resulting in greater susceptibility to infection, but too much cathelicidin may provoke an unhealthy inflammatory response.

“The key is that we now know this part of the immune response puzzle. It opens fantastic new options for study. For example, current drugs designed for use in diabetics might be beneficial to other people who need to boost this aspect of immunity. Conversely, these findings may help researchers understand disease associations with obesity and develop new strategies to optimize care.”