Cholesterol has gotten a bad reputation, thanks to mainstream media's penchant for alternating miracle vegetables with scare journalism, which prompts shady diet fad book authors to promote whatever is getting attention this year.

Outside health fads, cholesterol is an essential component of human cells, manufactured by the cells themselves, that serve to stiffen the cell's membrane, helping to shape the cell and protect it. By mapping the structure of a key enzyme involved in cholesterol production, researchers have gained new insight into this complex molecular process. 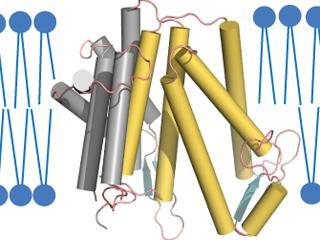 An enzyme responsible for a crucial step in the production of cholesterol has ten segments that span the cell membrane in which it is embedded. These contain two pockets the enzyme uses to bring the reactants together. Credit: Laboratory of Cell Biology at The Rockefeller University/Nature

"This is the first report to pinpoint the location of every atom — in this case nearly 3,000 of them — in one of the membrane-embedded enzymes cells use to make cholesterol. With the structure of this enzyme, we can better understand how the body synthesizes it," says Günter Blobel, John D. Rockefeller Jr., Professor and head of the Laboratory of Cell Biology at  Rockefeller University. "This accomplishment offers new insight on genetic disorders as well as the possibility of new approaches to lowering blood cholesterol when it becomes dangerously high."

Cells aren't the only source of cholesterol; cheeseburgers, lobsters, whipped cream and other rich foods can raise levels. Eat a lot of them, and the body compensates by making less of its own cholesterol and by becoming less receptive to cholesterol in the blood. (It's when traveling in the blood that cholesterol can become a hazard, leading to the formation of potentially blood-vessel blocking plaques.)

Healthy cholesterol requires balance: Too much can cause problems, but a certain amount is necessary. Not only do cholesterol molecules make cells' membranes more resistant to wear and tear, the health of the human body as a whole depends on it. This waxy substance serves as a precursor to some hormones, such as testosterone, as well as vitamin D and bile.

The cholesterol-making process in cells requires about 30 chemical reactions and 20 enzymes, seven of which are embedded in the cellular membrane. The mapping project focused on one of these, known as a sterol reductase, which helps two electrons travel from a molecule known as NADPH to another molecule that will eventually become cholesterol. This type of reaction is known as a reduction.

"Our images revealed two pockets within the enzyme's architecture. One contains the NADPH, and the other provides access to the cholesterol precursor. When in place, these molecules are close enough to spark this important step in the synthesis of cholesterol," says first author Xiaochun Li, a postdoc.

Li's interest began with a molecule known as the lamin B receptor (LBR), a sterol reductase in human cells. "Although LBR was discovered 26 years ago, and we know it contributes to cholesterol synthesis, no one knew what it looked like, or how it works," Li says.

Biologists interested in the structure of molecules crystallize them, and then bounce X-rays off the crystals. Based on the pattern produced by the X-rays, the scientists then infer the structure of the molecule. But LBR did not crystallize well, so Li had to find a more accommodating molecule. He found a good candidate in the maSR1 protein from a methane-eating bacterium, then tests at the University of Perugia in Italy revealed that maSR1 could perform the same reducing work as LBR, the human protein.

The X-ray diffraction of maSR1 crystals revealed a protein with 10 segments spanning the membrane. One half of the molecule contains two pockets that bring the reactants together. The researchers think the other half interacts with other enzymes involved in making cholesterol synthesis, as part of a relay system for ferrying the evolving molecule along.

Mutations in sterol reductase genes, including those for LBR, are associated with several disorders, including Pelger-Huet Anomaly, which causes defects in certain white blood cells, and Smith-Lemli-Opitz syndrome, associated with behavioral, physical and mental disabilities. To get a better idea of how these mutations alter the enzymes, Li and colleagues pinpointed the locations of the defects they caused in models of the molecule.

The research also has implications for the treatment of high cholesterol, Blobel says. "Many of the pills currently available interfere with early steps in the complex series of reactions that generates cholesterol. Our reaction occurs later, and may offer a new target worth investigating."