News Staff
It is well established that volcanic eruptions contribute to climate variability but quantifying those impacts has proven challenging due to inconsistencies in historic atmospheric data observed in ice cores and corresponding temperature variations seen in climate proxies such as tree rings.

A new study in Nature resolves those inconsistencies with a new reconstruction of the timing and associated radiative forcing of nearly 300 individual volcanic eruptions extending as far back as the early Roman period.

The study shows that 15 of the 16 coldest summers recorded between 500 BC and 1,000 AD followed large volcanic eruptions - with four of the coldest occurring shortly after the largest volcanic events found in record. This new reconstruction is derived from more than 20 individual ice cores extracted from ice sheets in Greenland and Antarctica and analyzed for volcanic sulfate primarily using DRI's state-of-the-art, ultra-trace chemical ice-core analytical system. These ice-core records provide a year-by-year history of atmospheric sulfate levels through time. 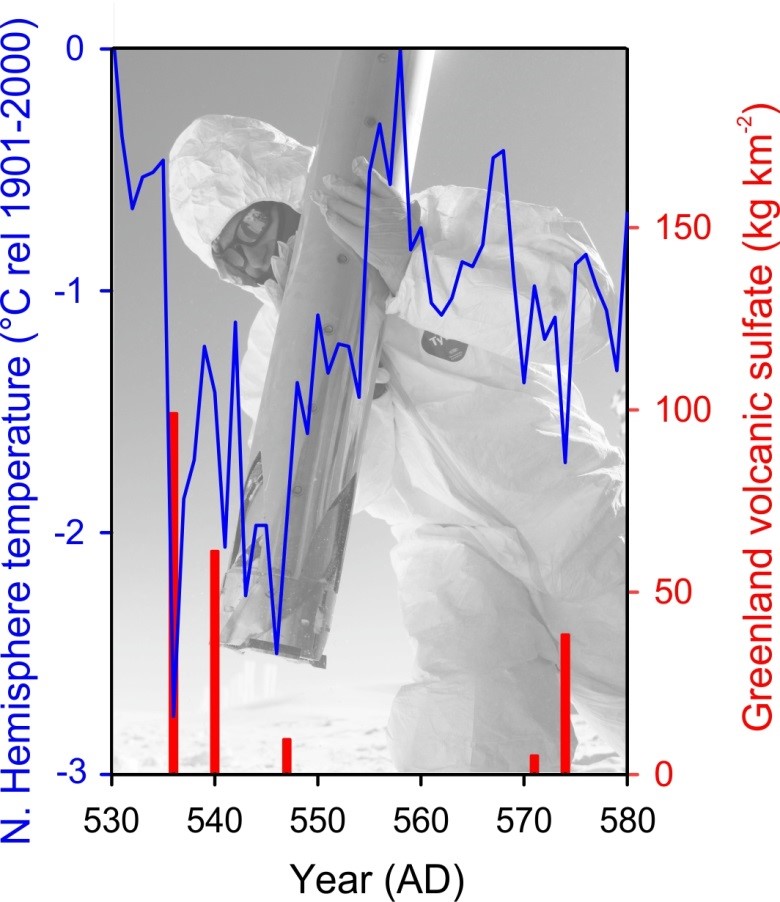 "We used a new method for producing the timescale," explained Mai Winstrup, Ph.D., a postdoctoral researcher at the University of Washington, Seattle. "Previously, this has been done by hand, but we used a statistical algorithm instead. Together with the state-of-the-art ice core chemistry measurements, this resulted in a more accurate dating of the ice cores."

The authors note that identification of new evidence found in both ice cores and corresponding tree rings allowed constraints and verification of their new age scale.

"With the discovery of a distinctive signature in the ice-core records from an extra-terrestrial cosmic ray event, we had a critical time marker that we used to significantly improve the dating accuracy of the ice-core chronologies," explained Kees Welten, Ph.D., an associate research chemist from the University of California, Berkeley.

A signature from this same event had been identified earlier in various tree-ring chronologies dating to 774-775 Common Era (CE).

"Ice-core timescales had been misdated previously by five to ten years during the first millennium leading to inconsistencies in the proposed timing of volcanic eruptions relative to written documentary and tree-ring evidence recording the climatic responses to the same eruptions," explained Francis Ludlow, Ph.D., a postdoctoral fellow from the Yale Climate&Energy Institute.

Throughout human history, sustained volcanic cooling effects on climate have triggered crop failures and famines. These events may have also contributed to pandemics and societal decline in agriculture-based communities.
News Articles
More Articles All Articles
About