News Staff
Typhoon Haiyan, which devastated large portions of the Philippines in November 2013, killed at least 6,300 people. It set records for the strongest storm ever at landfall and for the highest sustained wind speed over one minute ever, hitting 194 miles per hour when it reached the province of Eastern Samar.

It could become more common, according to a new model which factored in what controls the peak intensity of typhoons. The model finds that under climate change this century, storms like Haiyan could get even stronger and more common - as much as 14 percent, nearly equivalent to an increase of one category.

Unusual upper ocean warming rates over the low-latitude northwestern Pacific have already intensified storms in the region since the warmer water provides more fuel for storm intensity. The study projects that by the year 2100, the temperature of the upper ocean will be more than 1.6 degrees Celsius higher than the baseline average of the 50-year period from 1955-2005. 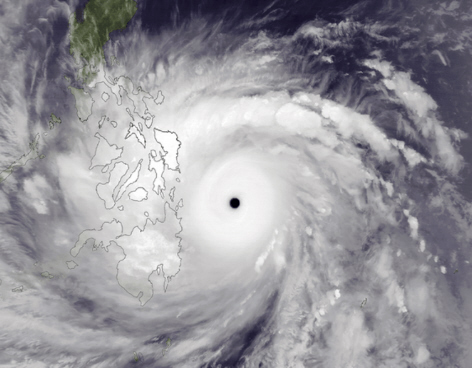 “Accurate projections of changes in tropical cyclone intensity can benefit society and inform policy making. Previous projections are based on theory and numerical modeling. We are tackling this issue from a different angle,” said Wei Mei of Scripps, the lead author of the study. “We first study the physical mechanisms for the observed variations in cyclone intensity, and then build a statistical model to project the future changes.”

In an effort to understand the variability of tropical cyclone intensity, the authors employed a new approach by decomposing intensity into two components: intensification rate (akin to acceleration) and intensification duration. This methodology allows them to gain more insights into which climate conditions were most strongly associated with the peak amount of intensity from one year to another by influencing one or both of the two factors.

They found that compared to atmospheric factors such as wind shear, atmospheric pressure, and vorticity, ocean temperature most strongly correlated to the rate of cyclone intensification.

Specifically, how strongly and quickly a cyclone can grow depends on two oceanic factors: pre-storm sea surface temperature and difference in temperature between the surface and subsurface. A warmer sea surface generally provides more energy for storm development. A large change in temperature from the surface to subsurface, however, can disrupt this flow of energy, because strong winds drive turbulence in the upper ocean, bringing cold water up from below and thereby cooling the sea surface.

“Our findings provide the first observational evidence for the dominance of upper ocean thermal structure in the interannual-to-decadal variability of typhoon lifetime peak intensity,” said co-author Shang-Ping Xie, the Roger Revelle Chair in Environmental Science at Scripps. “The observation-based empirical relationships allowed us to make the first statistical projection of typhoon intensity in a warming climate based on projected changes in upper ocean temperatures.”

Published in Science Advances May 29th. Besides Mei and Xie, study co-authors include Francois Primeau of UC Irvine, James C. McWilliams of UCLA, and Claudia Pasquero of the University of Milano-Bicocca in Milan, Italy.
News Articles
More Articles All Articles
About