When Remodeling Is Destruction: How Cartilage Contributes To Arthritis
By News Staff | September 14th 2014 10:00 AM | Print | E-mail

Rheumatoid arthritis causes chronic pain and inflammation in joints, such as those in the hands and feet, as well as knees and hips. Over time, rheumatoid arthritis can destroy the cartilage that lubricates and cushions the joints. In essence, it 'remodels' bones, leading to disfigurement, pain and reduced mobility.

Cartilage was previously thought to be a victim of an overzealous immune system but a new paper finds it has an active role in rheumatoid arthritis.

Dr Tommy Liu, Professor Ian Wicks, Dr Kate Lawler, Dr Ben Croker and colleagues from the Walter and Eliza Hall Institute made the discovery while investigating the role of the protein SOCS3 in controlling inflammation during rheumatoid arthritis. 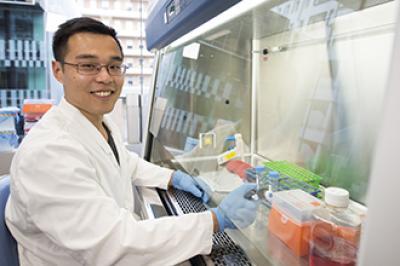 The study investigated how the molecules – known as suppressors of cytokine signalling (SOCS) molecules – that control the flow of chemical messages within and between cells regulate inflammation in rheumatoid arthritis. When the researchers created a model that lacked SOCS3 molecules in the cartilage, they found that tissue degradation increased.

"Autoimmune diseases such as rheumatoid arthritis are the result of the immune system wrongly attacking normal, healthy tissue. Our study has shown for the first time that cartilage participates in the production of inflammation-signalling chemicals and contributes to its own destruction," Liu said. "Without SOCS3, cartilage cells produced enzymes that drove tissue degradation and increased inflammation by releasing signaling molecules that triggered an increased autoimmune response. We also found that cartilage could produce a protein called RANKL that triggers bone remodeling.

"These results show that cartilage is not an innocent bystander that gets damaged as a result of rheumatoid arthritis, but instead plays an active role in disease progression."

There is no cure for rheumatoid arthritis, and few treatments are effective in slowing the onset of the disease. "Targeting the action of these inflammatory chemical messages could boost the efficacy of current treatments," Liu said.