After two percent of astronomers threw out one arbitrary definition of planet and replaced it with another arbitrary definition of planet, our solar system went from nine planets to eight. Pluto became instead a dwarf planet because the the International Astronomical Union said a planet must have "cleared its neighborhood" of other orbiting bodies and since Pluto did not clean out the entire Kuiper Belt full of asteroids it did not qualify.

NASA did not agree, at least not the experts like the principal investigator of NASA's New Horizons mission which flew by Pluto in 2015, while others argue there should not be one fewer planet, there should be more, such as Ceres and Eris, because by the IAU definitions (it must circle the sun) there are no planets outside our solar system.

Yet that will never be settled and instead of using common sense, the strange orbits of some objects in the farthest reaches of our solar system are believed by some to be the result of an unknown ninth planet, what used to be speculated as Planet 10. Instead, it is just gravity behind at all, proposes a new model. 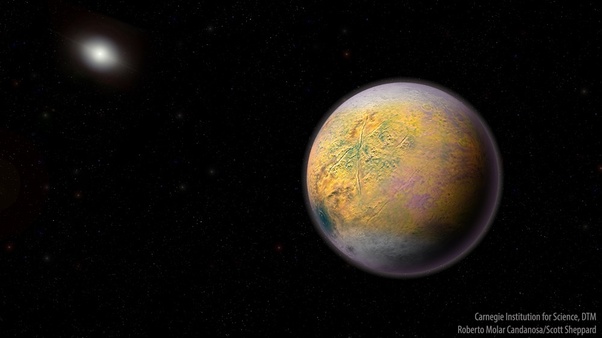 Gravity created by the combined gravitational force of small objects, a disc made up of small icy bodies with a combined mass as much as ten times that of Earth. They say that can explain the unusual orbits exhibited by some objects at the outer reaches of the solar system.

Beyond the orbit of Neptune lies the Kuiper Belt, which is made up of small bodies left over from the formation of the solar system. Neptune and the other giant planets gravitationally influence the objects in the Kuiper Belt and beyond, collectively known as trans-Neptunian Objects (TNOs), which encircle the Sun on nearly-circular paths from almost all directions.

There are mysterious outliers. Since 2003, around 30 TNOs on highly elliptical orbits have been spotted: they stand out by sharing, on average, the same spatial orientation. This type of clustering cannot be explained by our existing eight-planet solar system architecture and has led to some astronomers hypothesizing that the unusual orbits could be influenced by the existence of an as-yet-unknown ninth planet.

The 'Planet Nine' hypothesis suggests that to account for the unusual orbits of these TNOs, there would have to be another planet, believed to be about ten times more massive than Earth, lurking in the distant reaches of the solar system and 'shepherding' the TNOs in the same direction through the combined effect of its gravity and that of the rest of the solar system.

We can detect planets everywhere but our own solar system?

Earlier attempts to estimate the total mass of objects beyond Neptune have only added up to around one-tenth the mass of the Earth. The problem with the Planet Nine hypothesis is the same as when it was Planet 10; it's belief in magic to say it is massive enough to be 10 times earth and create these unusual orbits but avoid detection.

The new paper explains the perplexing spatially clustered orbits of some TNOs. In the process, they were able to estimate ranges in the disc's mass, its 'roundness' (or eccentricity), and forced gradual shifts in its orientations (or precession rate), which faithfully reproduced the outlier TNO orbits.