News Staff
A lava tube is just what it sounds like; a cave created when the surface of lava hardens but continues to flow underneath. When that trickles to a halt, the cave is left behind.

They compared those data to topographic studies about similar collapse chains on the Earth's surface and to laser scans of the inside of lava tubes in Lanzarote and the Galapagos, which allowed them to create boundary conditions for a relationship between collapse chains and subsurface cavities that are still intact on Mars. 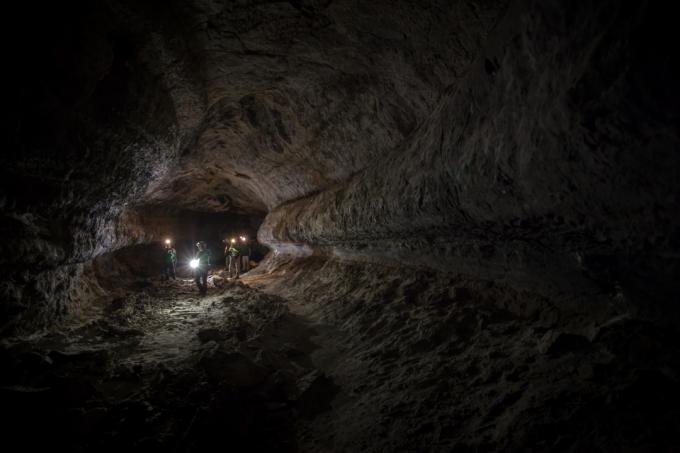 The model revealed that Martian and lunar tubes are respectively 100 and 1,000 times wider than those on Earth, which have a diameter of just 10 to 30 meters. The explanation is lower gravity and its effect on volcanism, which led to total volumes exceeding 1 billion cubic meters on the Moon.

The big benefit might be space exploration. With tubes as large as 40 kilometres, ensconced in a protected, stable environment, they could be ideal for a settlement. On earth, that much space is a city of 200,000, and it would be protected from cosmic and solar radiation, and micrometeorite impacts. Because it is confined it would be relatively easy to keep temperature stable.

"What is most important is that, despite the impressive dimension of the lunar tubes, they remain well within the roof stability threshold because of a lower gravitational attraction", explains Matteo Massironi, who is professor of Structural and Planetary Geology at the Department of Geosciences of the University of Padua. "This means that the majority of lava tubes underneath the maria smooth plains are intact. The collapse chains we observed might have been caused by asteroids piercing the tube walls. This is what the collapse chains in Marius Hills seem to suggest. From the latter, we can get access to these huge underground cavities".
News Articles
More Articles All Articles
About