Tommaso Dorigo
Amateur astronomers fond of visual observation of faint galaxies and other fuzzy treasures of the night sky are always in search of the best observative site, where to drag their large Dobsonian telescopes.

Unfortunately, their road is always uphill - also in a metaphorical sense: light pollution is growing everywhere at a disturbing rate, and it has already erased all but the brightest stars from our urban and suburban skies.

Many of our kids grow without having seen the Milky Way, and the few who are drawn to astronomy are surprised to realize, from the tales of older dogs like me, that it did not use to be that way.

A click on Google Earth will be enough to check what is really the situation in your area: go to "gallery", scroll down to "NASA", and tick "earth city lights". Below is the result for the area of central Europe. 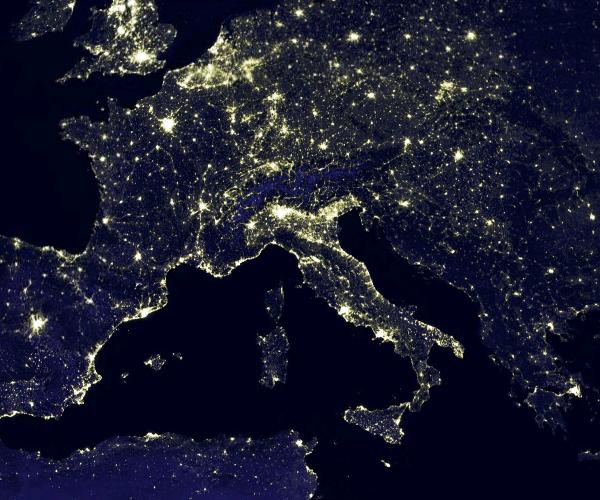 It is quite evident, by comparing land to sea, that there is no escape from the light pollution of the urban areas. Even sparsely populated areas such as the Alps or the Balkans are emitting lots of light to space. And the situation is actually worse, because what NASA can picture is the light arriving directly from ground sources in clear nights, while in general the presence of clouds will diffuse the light from sources as far as 200 kilometers away. A mild screening effect is instead provided by mountainous terrain, which is effective in cutting out the diffusion of light from those sources.

"we account for many details like the scattering of light by molecules and aerosols, the extinction along light paths, the atmospheric aerosol content, the Earth curvature, the altitude of each area, the mountain screening, the observed sky direction, the natural sky brightness, the stellar extinction, the eye capability."

Below you can see the situation of roughly the same area I pictured above, with a colour coding indicating the seriousness of the problem. You can see that the information matches quite closely that available from space pictures, however there are indeed notable differences. Amateur astronomers need the above information to decide which site provides the best chances of getting the most out of their astronomic equipment. However, the direct survey of possible dark sites is mandatory. Besides the observation of the visual limiting magnitude of stars, there are two additional tools one may use for these surveys: a device called "sky quality meter", which measures the magnitude per unit of surface of large swaths of sky, or pictures taken under controlled conditions with digital devices.

Being a die-hard visual astronomer, I am quite interested in finding the best site close to Venice, my home town. I consider myself comparatively lucky to live not too far from the eastern Alps, which provide both a good screening from the huge light sources from urban areas in Veneto and Friuli, and a remedy against light extinction: the higher you go, the less thick is the atmosphere above your head. With a few friends who share my interest for faint fuzzies, we have started surveying a small region of the Alps, about 150 km north of Venice.

We have now compiled a list of a few sites which have very good characteristics, and we visit the best of them once a month, during moonless nights. The sky quality meter has provided us with quantitative information on the quality of the sky from there. The two best sites we found are Casera Razzo, a location next to a 6000 ft mountain pass dividing Veneto from Friuli, and a place called "Sorgenti del Piave", where river Piave has its springs.

The latter place has been monitored a few days ago by one of my friends, Mauro Da Lio (who incidentally is a professor of Engineering at University of Trento) who produced a composite picture of the night lights arriving to the site from sources at the horizon, and processed it very carefully (accounting for the spectral response of his digital camera, noise from the CCD, and temperature) to obtain a 360 degree map of the visual magnitude per square arcsecond at the horizon and above. Here is the result (click on the thumbnail to get the full-size image):

You can see that towns as far away as 70-100 km contribute sizably to light pollution at the horizon, although the screening effect of mountains helps reducing it considerably. The worse pollution comes from Udine, a town with less than 100,000 inhabitants, which however does not have mountains nearby, such that light has a free path to hit the atmosphere close to the observing site. The information provided by this map is a very useful aid to help finding still better observing sites. Quoting from Mauro's post in the blog where we report our visual observations:

(Quick and dirty translation: "Pictures have been exposed with ISO 1600 for 30" at F3.5, with a 18mm lens on a Canon EOS 1000D. I processed raw images to a colour temperature of 4600 K (10% less than standard, to reproduce, as far as possible, the scotopic spectral sensitivity, which has its maximum at about 500 nm, that is 10% less than the photopic sensitivity which is of 550 nm). In the processing of raw images I also exploited the correction of lighting on the boundaries (a syntethic flat) of the camera.")

(Quick and dirty translation: "I then processed images obtaining level curves of the surface brightness, as in the site of American parks. In the following figure are shown the isophotes corresponding to 20., 20.5, 21., 21.5 magnitudes per square arcsecond. The Milky Way and the Scutum are also visible. Towards South the level of 21.5 is reached at about 30 degrees of elevation (but there is also the effect of the Milky Way). Towards West the 21.5 level is due to airglow around 15 degrees of elevation. Clouds above Tolmezzo have a visual magnitude of 20. The isophote of 21.0 represents somehow the limit of polluted zone, which unfortunately matches with South, up to about 20 degrees of elevation.")

Here is the image with the isophotes (click to get a larger image):

Well done Mauro! I encourage anybody who likes to observe the dark sky and is endowed with a digital camera and a brain to do the same exercise elsewhere, to collect more data. Indeed, through the effort of many amateur astronomers equipped with SQM devices, a mapping of worthy sites is already well underway, as the picture below shows: If you are not an amateur astronomer, you can still consider that the light we send out to space is indeed a form of pollution: it worsens the visibility of the night sky, it constitutes a waste of energy, and it makes life harder for astronomers.

So turn off your lights at night, would you please ?
A Quantum Diaries Survivor
More Articles All Articles
About