Getting Science Through: Misunderstood Terms In Science Communication
By Tommaso Dorigo | October 24th 2011 06:18 AM | Print | E-mail

Tommaso Dorigo
This morning I read with interest a paper on Physics Today, titled "Communicating the Science of Climate Change", by R. Somerville and S. Hassol. In it, there is a table worth pondering about. Here it is: 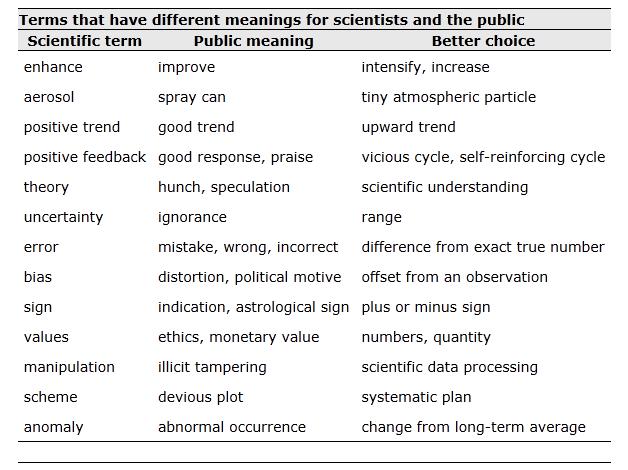 The table lists a few terms whose meaning is different for scientists and the general public. Without knowing it, I have fought for years against these and other similar terms while writing articles for this blog, trying to avoid giving for granted not just hard physics concepts, but the meaning of words that are used in a different way by my peers and by non-physicists.

It is quite nice to see such a list in print, and I hope it gets extended and publicized, such that all of us who make science outreach note how easy it is to be misunderstood, and how hard we need to think over every single sentence we write if we want it to convey the meaning we want.

Indeed, some have taken seriously the task of putting together an improved list already. I think it is better for me to not fiddle with such a topic here, mostly because I am not an English native speaker so to me there is an added trouble in finding proper synonims. However, here are just a few examples proper of subnuclear physics you should be aware of, if you intend to continue reading my blog:

Significance: not a meaning, but a measure of how far is a measurement from a reference value.
Simulation: not the act of feigning, not an counterfeit, but rather, a computer code (and by synecdoche, the resulting data sample) representing the expected behaviour of a physical process.
Reaction: not necessarily something following an action; rather, and more specifically, the result of the interaction of two bodies.
(Natural) Width: not the size of a particle, but rather, the indetermination in its energy.
Spin: not a special point of view, but an intrinsic angular momentum of a particle.