Massimo Pigliucci
I’ve been reading for a while now Jim Baggott’s Farewell to Reality: How Modern Physics Has Betrayed the Search for Scientific Truth, a fascinating tour through cutting edge theoretical physics, led by someone with a physics background and a healthy (I think) dose of skepticism about the latest declarations from string theorists and the like.
Chapter 10 of the book goes through the so-called “black holes war” (BHW) that stretched for two and a half decades between Stephen Hawking on one side and Leonard Susskind, Gerard ’t Hooft, and others. The BHW is interesting because Baggott turns it into an illustration of what he thinks is the problem with current theoretical physics, a problem that has much to do with philosophical theories of truth and with the difference between physics and metaphysics.
The BHW began with a challenge issued by Hawking at a scientific gathering back in 1981. Quantum theory maintains that information carried by the wave function of a quantum object cannot be destroyed, it must be preserved because it connects past and future. But Hawking (who is a relativist, not a quantum theorist) had arrived at the conclusion that black holes evaporate over time, emitting what is now known as Hawking radiation. Since everything that ends up inside a black hole’s event horizon can be thought of as representing bits of information, Hawking concluded that while the black hole is evaporating information is not just scrambled — as previously thought — but actually destroyed, thereby contradicting a crucial tenet of quantum theory. Oops!
You can see why Susskind and ’t Hooft, who are quantum theorists, didn’t like this thing, ahem, a single bit. The BHW was on.
It took Susskind, ’t Hooft and Don Page a number of years to do it, but they finally came up with a serious counter to Hawking’s challenge, indeed one that led Hawking to admit defeat in 2007. The best known visual metaphor that captures the response is Susskind’s famous “holographic universe.” The principle essentially states that the information contained in an n-dimensional space (let’s say, a three-dimensional black hole, for instance) is equivalent to the information found on its n-1 dimensional boundary (for example, the surface of said black hole). 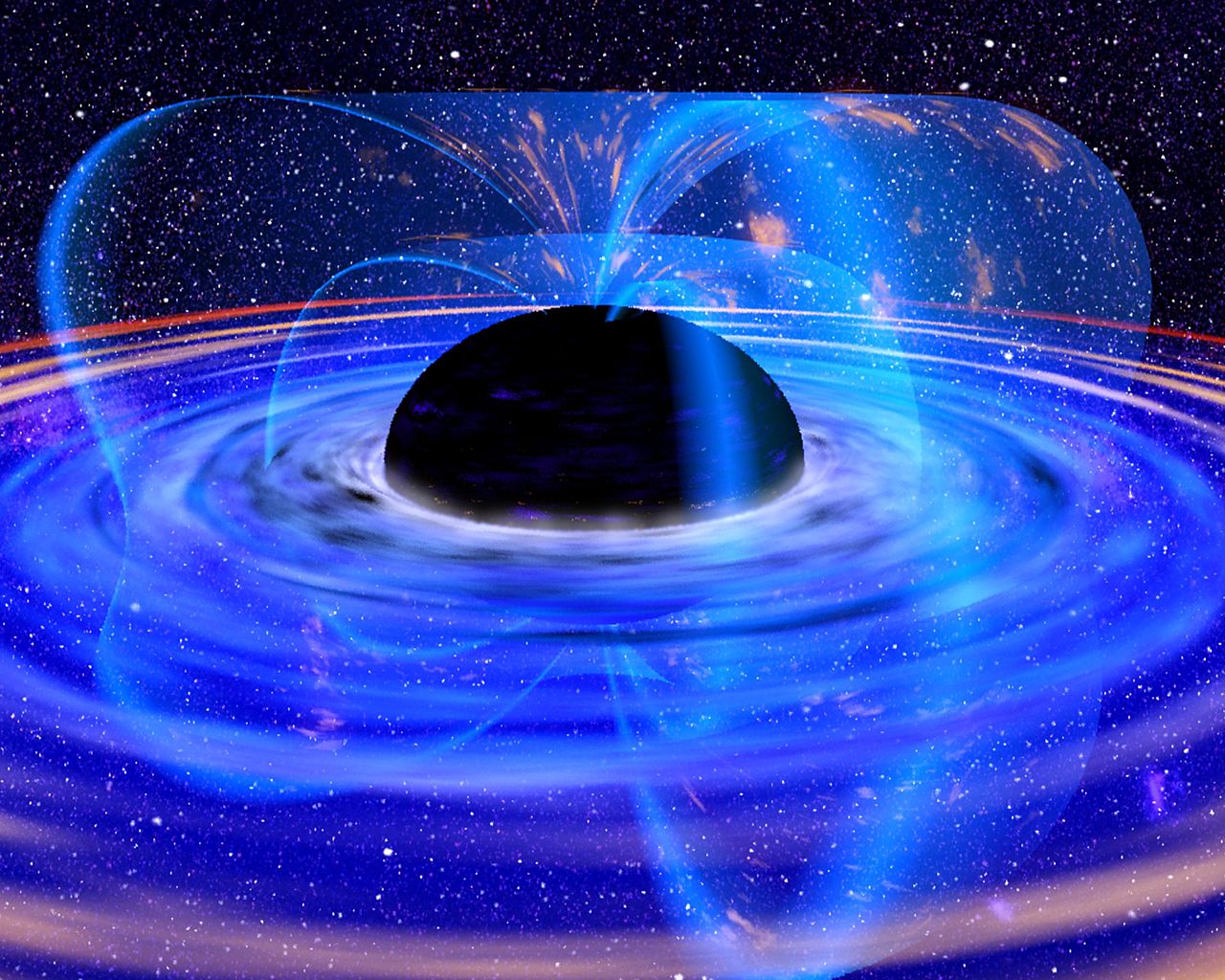 Susskind boldly proposed that the universe itself behaves as a hologram, i.e., that all the information that constitutes our three-dimensional world is actually encoded on the universe’s equivalent of a black hole’s event horizon (the so-called cosmic horizon).

If true, this would mean that “reality” as we understand it is an illusion, with the action actually going on at the cosmic horizon. Baggott ingeniously compares this to a sort of reverse Plato’s cave: it isn’t the three-dimensional world that is reflected in a pale way on the walls of a cave were people are chained and can only see shadows of the real thing; it is the three-dimensional world that is a (holographic) projection of the information stored at the cosmic horizon.

Is your mind spinning properly? Good.
What does any of this have to do with the BHW? That became clear in 1998, when Juan Maldacena (theoretically) demonstrated a “superstring duality”: it turns out that the physics of an n-dimensional spacetime described by a particular type of superstring theory (which one doesn’t really matter for our purposes here, but you’ll find all the details in Baggott’s book) is equivalent to the physics described by a quantum field theory applied to the n-1 dimensional boundary of that same spacetime. This result has deep connections with the idea of a holographic universe, so much so that Susskind eventually wrote in triumph:

Whatever else Maldacena and Witten had done, they had proved beyond any shadow of a doubt that information would never be lost behind a black hole horizon. The string theorists would understand this immediately; the relativists would take longer [ouch!]. But the war was over.

Indeed, as I said, Hawking conceded in 2007, thus ending the BHW, despite some rather large caveats attached to the Maldacena-Witten results, such as that, you know, they actually describe a universe that is not at all like our own.
And now comes what Baggott properly refers to as the reality check. Let us start with the obvious, but somehow overlooked, fact that we only have (very) indirect evidence of the very existence of black holes, the celestial objects that were at the center of the above sketched dispute. And let us continue with the additional fact that we have no way of investigating the internal properties of black holes, even theoretically (because the laws of physics as we understand them break down inside a black hole’s event horizon). We don’t actually know whether Hawking radiation is a real physical phenomenon, nor whether black holes do evaporate.
To put it another way, the entire BHW was waged on theoretical grounds, by exploring the consequences of mathematical theories that are connected to, but not at all firmly grounded in, what experimental physics and astronomy are actually capable of telling us. How, then, do we know if any of the above is “true”? Well, that depends on what you mean by truth or, more precisely, to what sort of philosophical account of truth (and of science) you subscribe to.
There are several theories of truth in epistemology, but the two major contenders, especially as far as the sort of discussion we are having is concerned, are the correspondence and the coherence theories. Roughly speaking, the correspondence theory of truth is what scientists (usually without explicitly thinking about it this way) deploy: in science a statement, hypothesis or theory is considered (provisionally, of course) true if it appears to correspond with the way things actually are out there. So, for instance, it is true that I wrote this essay on an airplane on my way between Rome and New York, because this statement corresponds with reality as ascertainable via a number of empirically verifiable facts (e.g., my airplane tickets, witnesses who saw me boarding, deplaning and writing on my iPad in between, time stamps encoded in the file I generated, and so on).
A coherentist account of truth seems to me to be more appropriate for fields like mathematics, logic, and perhaps (to a point) moral reasoning. Coherentism is concerned with the internal consistency of a given account, eschewing any reference to correspondence with a reality that, by definition, we can only access indirectly (after all, if you wish to measure the degree of correspondence between your theories and the way things really are, it would seem that you need some kind of direct access to the latter; but you don’t have it, that’s why you need theories to begin with; there are ways around this, but they would lead us too far from the matter at hand).
Back to the outcome of the BHW: in what sense is the holographic principle “true,” given our short discussion of theories of truth? As Baggott reminds his readers, the principle hasn’t been established by way of empirical observations or experiments, so it cannot possibly be true in the sense of the correspondence theory. Rather, it has been arrived at by way of superstring theory, which itself is a theoretical structure which has, so far, not been empirically tested either. The holographic principle, therefore, is true — at best — in the sense of the coherence theory of truth. But the history of physics is littered with examples of beautifully coherent theories that turned out to be wrong when the empirical verdict finally came in. Perhaps Hawking conceded a bit prematurely, after all.
Finally, back to the idea that “information is physical.” What does that mean? Baggott summarizes the two possibilities thusly: “The scientific interpretation acknowledges that information is not much different from other physical quantities [like, say, temperature]. But, as such, it is a secondary quality [italics in the original] … The metaphysical interpretation suggests that information exists independently of the physical system, that it is a primary quality [original italics].” He concludes that he has no problem with either interpretation, as long as nobody is going to attempt to pass the second one as science. I couldn’t agree more.