Danna Staaf
Last night I had a sappy mama dream about holding and nursing my baby. Half-waking from it, I found myself wondering if the baby--scheduled to remain comfortably ensconced in my womb for another four months--might have had the same dream.

When I woke up a little further, I realized I didn't even know if a five-month-old fetus could dream. I hied me to the internet, where I learned that REM (the stage of sleep when your body paralyzes itself, your brain activity looks much like it does when you're awake, and you're most likely to dream) is first observed in humans at seven months' gestation. The reason we know this? REM stands for rapid eye movement, which can be seen in fancypants prenatal imaging.

No one is totally sure why we humans have REM sleep. It may help stimulate neuronal growth and connection, consolidate memories, or enhance creativity. It certainly seems important to brain development, one way or another, since infants spend most of their sleep time in REM, but that proportion declines to only 20% of adult sleep.

Casting a broad phylogenetic net often helps us understand the origin of a phenomenon. Er, sorry. I mean, do other animals have REM sleep? Unfortunately, whenever I look for rapid eye movements in my napping cats, I get distracted by the twitching nose and paws. 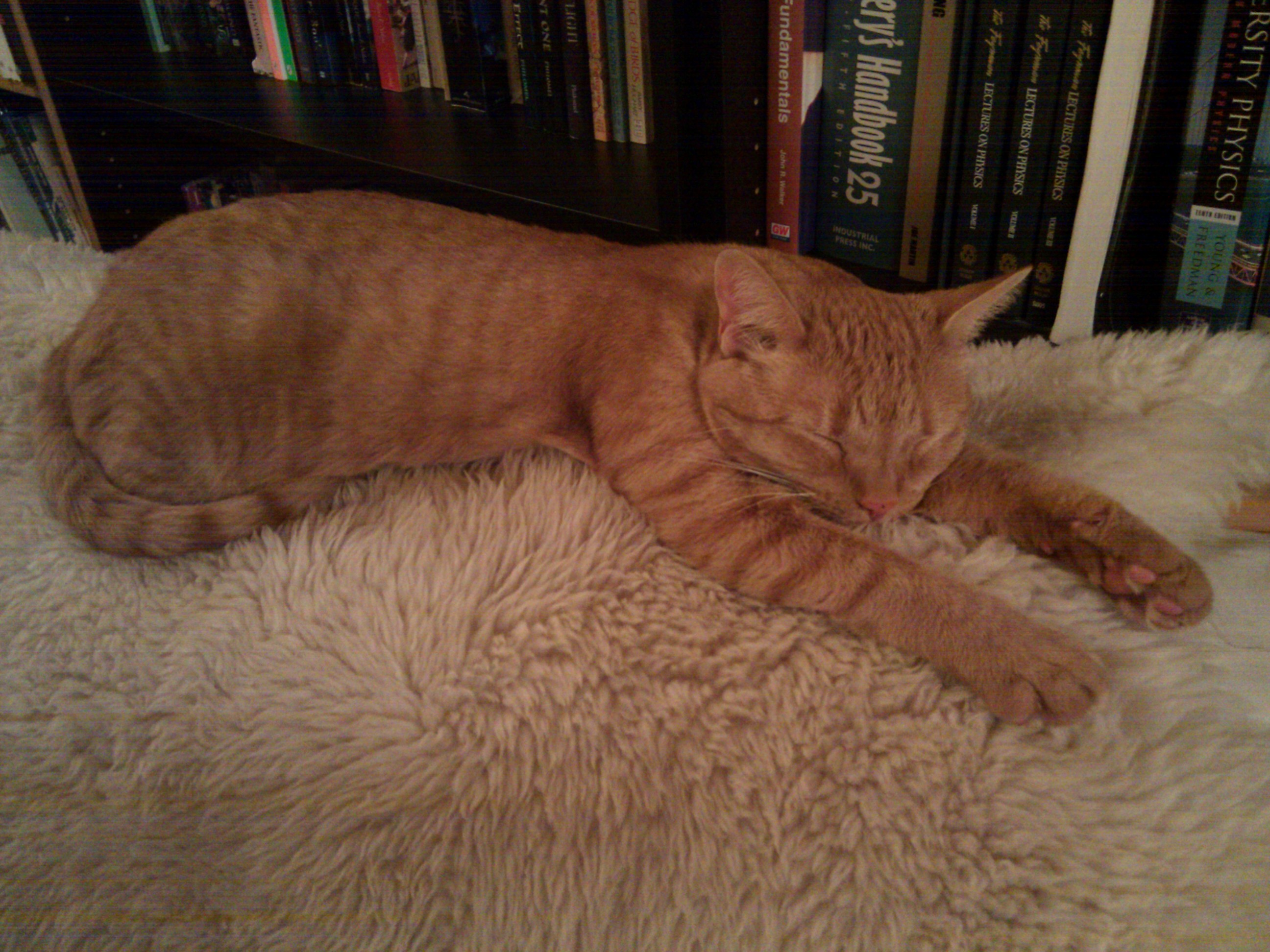 Debilitatingly cute! So I went back to the internet. Turns out that all vertebrates sleep, and birds and mammals show recognizable REM sleep. Fine. Great. What about the interesting animals?

Many invertebrates also sleep, including the workhorses of the laboratory world, fruit flies and nematodes. Researchers are careful to call their behaviors "sleep-like states," which may seem kind of wussy and annoying, but the problem is that our modern definition of sleep depends on electrical brain activity, which is difficult to measure in brains that aren't the vertebrate brains the measures were designed for.

Despite such difficulties, a new study in PLoS ONE has identifed an analogue of REM sleep in cuttlefish! This is huge--the first instance outside birds and mammals.

Researchers from the University of Pennsylvania and Millersville University set up an aquarium with a nice cozy "sleeping site" for their cuttlefish. All the animals exhibited periods of quiescence, resting on the bottom of the tank and burying themselves in gravel. And some of them* showed REM-like patterns of sleep. (These sleeping cuttlefish sound just about as cute as my cats, complete with arm twitches, color changes, and, of course, rapid eye movements.)

Figure 1. A cuttlefish goes to bed.

The color-changing is particularly cool. Cuttlefish chromatophore activity during this REM-like sleep definitely wasn't the result of random neurons firing--their skin actually showed coordinated, recognizable patterns. That's just what you'd expect for proper REM sleep, based on cats and humans. When the paralysis part of REM sleep fails, we engage in coordinated, recognizable behaviors (like stalking).

Watch the videos of sleeping cuttlefish!

In one sense, this news isn't surprising. If any invertebrate were going to have REM sleep, it would be a cephalopod. Cephalopods, which include octopuses and squids as well as cuttlefish, are the acknowledged brains of the invertebrate world, and we know that REM sleep aids complex brain function and development.

And yet--Frank et al. found the puzzling result that juvenile cuttles exhibited no REM at all. The state was only seen in adult and senescent animals. At first this pattern seems opposite to humans, whose extensive REM in infancy decreases throughout life.

But in a way, it isn't that different. Humans don't actually start with lots of REM. We start with no REM, during the first few months in the womb, while the brain is in its very early stages of development. (My five-month-old fetus, precocious though she no doubt is, is probably not dreaming yet.) Frank et al. suggest that maybe juvenile cuttlefish brains aren't yet developed enough for REM sleep.

This brings me back to an old idea. Cephalopods have such a tragic mismatch of complex brains and brief lifespans. If we could just delay senescence and death, giving them a generous 20 or 50 years, what could they accomplish? What couldn't they accomplish?


* Specifically, the three cuttlefish C-check, Tiny, and KY. I would love to know the stories behind these names.