In last month’s review of Preparing the Ghost, I mentioned that you can actually learn facts from some fiction. Below is one such novel, crammed with science. As author Ryan Lockwood wrote in an e-mail, “Hopefully, most of the biology described in the book is in-line with real-world scientific data. I want to educate readers to some extent and encourage them to learn more after they finish the book.” 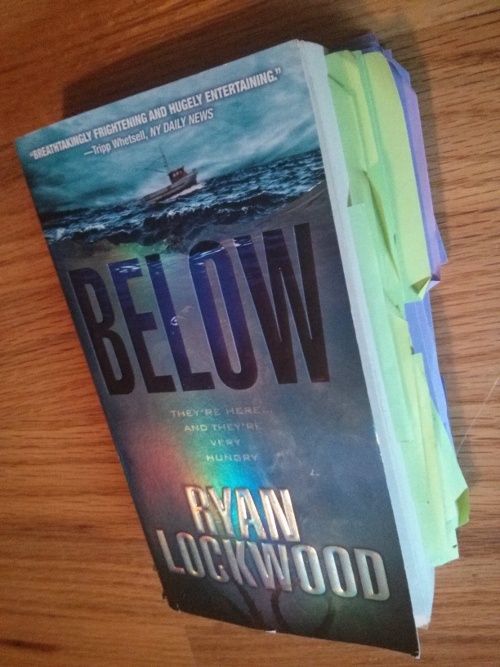 Why yes, I AM a huge nerd. Lucky for you, most of those notes didn’t make it into this essay.

Below is a ocean thriller, along the lines of Jaws. (Beast would be a better comparison, but fewer people have heard of it.) Instead of a single scary sea monster, though, Below features a huge school of . . . wait for it . . . Humboldt squid!

I do mean huge. A shoal of one thousand and two hundred (1200) unusually large and aggressive Humboldt squid travel through the novel together, wreaking bloody havoc on the California coast.

Is such a massive crowd plausible? Well, Humboldts are certainly gregarious. Those who fish for them know that once you find one, you’ve most likely found a boatful. And scientists have used sonar to spot tremendous aggregations. But these large groups don’t seem to be organized like typical schools. Instead of phalanxes moving in formation, they're more like very full bars: a lot of squid packed into a small space, each doing its own thing. Groups of up to 40 squid venture out in coordinated hunting forays, then return to the mass.

Could the whole aggregation migrate together over a long distance, say from Mexico to California, as Lockwood’s shoal does? We don’t know. So, in a novel, why not?

Lockwood’s fictional scientists are similarly free to indulge their fantasies. Heroine Dr. Val dives to 100 feet without a buddy and attempts to communicate with Humboldt squid using a flashlight. In real life, making such a dive alone would be idiotically unsafe even without any large predators in the picture. However, scientists have used deep-diving, light-flashing robots to study squid behavior. So I can fully understand Val’s motivation.

Lockwood wrote: “I did take some artistic liberties (for the first time in my life as a writer) because this is, in the end, simply a work of fiction. I wanted to keep it based in reality, but wasn't concerned with getting every detail true to life. For example, my main squid characters grew a foot or two in the final version after prompting from the publisher.”

Without a doubt, my favorite piece of “fiction based in reality” is the reveal of just why these particular squid are so large and aggressive.

Spoiler alert! Go away if you don’t want to read it.

Shoo shoo shoo, people who are picky about spoilers.

The Humboldt squid in Below are parasitized!

Are there any known parasites that cause squid to grow abnormally large and absurdly aggressive, attacking prey (humans) that bear no resemblance to their usual fare (small fish and shrimp)? Nope! But parasites are creative beyond belief when it comes to messing with hosts, so as far as I’m concerned you’re welcome to blame them for almost anything.

“I wanted to add the parasite twist to give the squid an excuse for being so aggressive,” wrote Lockwood, “so that I wouldn't create an anti-squid lynch mob - I certainly didn't want to demonize a real species.”

It’s an understandable concern. After all, the legacy of Jaws includes horrific damage to great white sharks; Peter Benchley himself regretted it and turned conservationist. But this is the 2010’s, and it’s no great surprise that by the end of Below, the real villain is the environmental havoc wrought by humans.

In real life, there's plenty of havoc. But do I think anything like the scenario outlined in Below could threaten real swimmers, divers, and boaters off California with gruesome dismemberment by squid? No, no, a thousand times no. Is the novel nevertheless an intellectually stimulating and emotionally provocative work of imagination? Yes indeedy!