At the Brisbane Writers’ Festival some years ago, novelist Peter Carey responded to relentless historical questioning about his True History of the Kelly Gang (2000) by sinking in his chair and saying “I made it up”.

But the thing is, he didn’t.

Peter Carey was trading in the power of a well-known past, and so his novel invited commentary on historical grounds as well as literary ones. He expected us to evaluate the authenticity of the voice and his ability to get inside the famous helmet.

He was playing with a past that he knows we know – indeed, our independent knowledge of the “true” history provides the grounds for his game.

I don’t think he could have written that novel until historian Ian Jones had written his 1995 biography of Ned Kelly, and equally, I think we cannot now write the history of the Kelly outbreak without learning from the extraordinary ventriloquism of Carey’s novel. This is the intriguing dance between history and fiction.

Let me describe this dance – this intertwining of history and fiction in a quest for understanding – as it has shaped debates about violence and dispossession on the Australian frontier over the past century.

From the 1930s it was novelists who led the way in imagining the other side of the Australian frontier.

Eleanor Dark (1901-1985) was probably Australia’s most influential historical writer in the 20th century. Her trilogy of historical novels, especially the first volume, The Timeless Land (1941), grew out of long hours of research in the Mitchell Library. 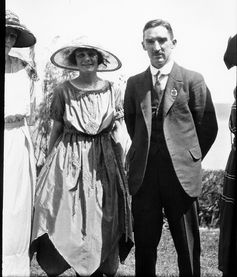 Dark found herself sickened by the complacency of Sydney’s celebration of the sesquicentenary of British settlement in 1938. Aborigines, convicts and women were forgotten or suppressed in a triumphal national story that celebrated white free male pioneers planting the flag on a virgin continent.

Professional historians, the few that existed, were doing little to unsettle this complacency, applying their expertise mostly to imperial history and to situating Australian history as a footnote to it.

Dark wanted to write a more radical historical account, one from the inside, looking out at the swelling tide of invasion. Her novel began with an Aboriginal man, Wunbula, and his son, Bennilong, standing on an eastern headland scanning the horizon, watching for the return of the great ship with wings, the one that had visited briefly years before.

It was a stunning imaginative leap from the ships to shore, to the view from the edge of the trees.

Dark was decades ahead of Australia’s historians in realising that the big story about the British colonisation at Port Jackson was that of the encounter between settlers and Aborigines.

By the 1970s historians were catching up with Dark’s imaginative leap – Henry Reynolds, Lyndall Ryan, Raymond Evans and others were investigating “the other side of the frontier”.

And one of the first and best frontier histories to be written was by a poet, Judith Wright.

In the 1970s, Wright was embroiled in intensive political campaigning for Aboriginal land rights and was a foundation member of the Aboriginal Treaty Committee. This committee, led by H C “Nugget” Coombs, called for “an Aboriginal treaty, within Australia, between Australians”.

The adversarial context of Wright’s campaigning drew from her a different kind of writing, something that went beyond metaphorical or poetic truth. She needed words that would be legally and historically defensible.

Twenty years after the publication of a novel about her forebears, The Generations of Men (1959), she returned to her family story and transformed that semi-fictional pastoral saga into a dispassionate and deeply researched history called The Cry for the Dead (1981). Her book gave a secure scholarly foundation to the political campaign of the Aboriginal Treaty Committee.

I think this turn to history is a fascinating moment in the career of a great writer.

Wright needed unique, grounded and localised truths that she could go out and do battle with. She had to be able to show that this happened exactly here, precisely then. So in the 1970s this poet and one-time writer of fiction chose history as her art for conveying truth.

Like Eleanor Dark, Judith Wright carefully set about becoming a historian. She read her way through the pastoral histories and the local pioneering chronicles. She was especially interested in the new work by historians on the frontier and she trawled the regional archives and newspapers.

“My reading and research”, she wrote in The Cry for the Dead, “took me into dark places, into which historians are only recently beginning to throw some light”. Over the next 20 years, historians would transform our understanding of Australia’s forgotten war.

Contested histories at the turn of the century

By the late 1990s, frontier conflict had become accepted in Australian historiography and there was a conservative backlash, seeking to discredit a generation of research.

Conservative critics initiated a fight over footnotes and tried to count the precise number of Aboriginal and settler dead on the frontier as if it decided the ethics of the issue.

It was the moral vacuum created by this critique that invited, indeed demanded, works such as Mark McKenna’s Looking for Blackfellas’ Point (2002), Inga Clendinnen’s Dancing with Strangers (2003), and Kate Grenville’s The Secret River (2005), all published in the early 2000s, and all stories that aimed to remind us of the intimacy and familiarity of the frontier, of its visceral, violent reality, and also of its alternative human possibilities.

These three books, two of history, one of fiction, sought to enlarge our capacity for compassion, to win back ground for tolerance and understanding.

Grenville’s commentary on her novel addressed this context directly. “The voice of debate might stimulate the brain”, she declared in 2005, “the dry voice of ‘facts’ might make us comfortable, even relaxed. It takes the voice of fiction to get the feet walking in a new direction.”

Her hunger for a new direction in the adversarial political debate was widely shared – and the solution she offered was “the oblique voice of fiction”.

But to Grenville’s frustration, she found herself questioned about history and fiction rather than frontier violence. And to her surprise, she found herself criticised by the very historians she might have expected to share her political quest, especially the two whose books had been shaped by the same public conversation.

She expressed dismay and a sense of betrayal, and commentators relished a “turf war” between history and fiction.

Grenville had expected and wanted a debate with the conservative critics of frontier conflict. But the targets of conservatives at that time were historians, and the debate was about the precise, grounded, evidenced truths of history.

In order to be a combatant on that ground, you needed time, place and specificity – just as Judith Wright had found in the battle over land rights in the 1970s.

Grenville’s “oblique voice of fiction” offered a new direction precisely because it was oblique. The Secret River was not a work of logic and argument, and it was never going to attract the counting-the-dead conservative critique because it didn’t deal in contextual, documented truth.

By “pillaging” the past, as she put it, and by moving incidents out of time and place, Grenville distilled a parable. “This is a story about all settlers, and settler psyche, in all places, throughout the colonial period”, historian Grace Karskens said of Grenville’s novel.

The Secret River was taken intravenously by its reading public and was a timely, powerful public intervention in exactly the way Grenville must have hoped.

But Grenville’s method, which contrasted with that of Eleanor Dark’s contextual historical fiction, left her outside the political debate.

In her public commentaries, she seemed to want it both ways – to wield the oblique power of fiction and the cachet of a researched past. She wanted to join the game of history but to play by different rules.

It’s not surprising or unreasonable, then, that historians would voice opinions about her historical methodology, as set out in her interviews and memoir, especially at a moment in public culture when they constantly had to defend their craft and explain the sources and methods of good history.

Thus Grenville unwittingly found herself in the middle of a debate that goes to the heart of the discipline of history, that matters very much in public affairs, and that was fundamentally not about her.

This debate over The Secret River concealed the sympathy and symbiosis that generally exists between history and fiction.

History and fiction journey together and separately into the past; they are a tag team, sometimes taking turns, sometimes working in tandem. They can be uneasy partners, but they are also magnetically drawn to one another in the quest for deeper understanding.

History doesn’t own truth, and fiction doesn’t own imagination, but there are times when the differences between history and fiction are very important indeed. At such times it is incumbent on historians – those who choose at certain moments to write history – to insist and reflect on the distinction.

Such explanations should not be misinterpreted as defending territory.

This article is based on an essay published in the academic journal Text and is the second in our series, Writing History. Keep an eye out for more in the coming days.

Tom Griffiths is William Keith Hancock Professor of History at Australian National University. This article was originally published on The Conversation. Read the original article.