Danna Staaf
This a double whammy, a two-for-the-price-of-one, a joint review (for some value of the word review) of two books with the same title: Kraken. 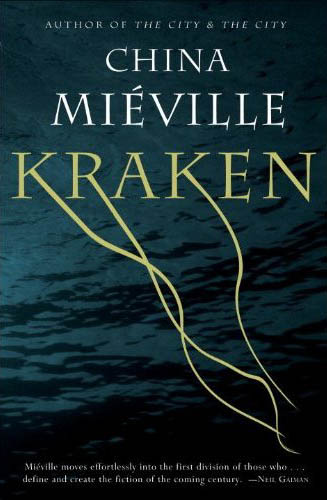 China Miéville's Kraken is a New Weird novel that tracks the adventures of London Natural History Museum curator Billy Harrow. The inexplicable theft of his prize Architeuthis specimen forces him into an other-London of magical knacks, squid cultists, gangsters, and impending Armageddon. 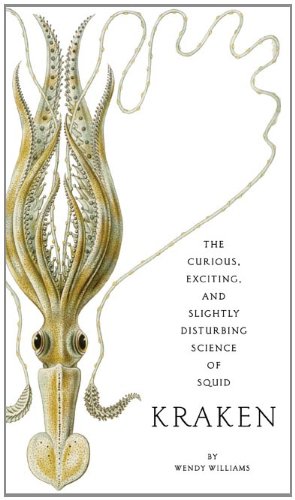 Wendy Williams' Kraken is a science book that tracks the research of Stanford squid biologist Julie Stewart. Her study organism Dosidicus is a nexus from which chapters spin off to explore questions of squid anatomy, diet, love-making, and intelligence.

Now, it may sound like these two books have nothing in common. But note that they both weave a tale of adventure and intrigue around a single central cephalopod! Billy's Architeuthis dux is the focus of gang warfare, cult worship, and possibly the end of the world. Julie's Dosidicus gigas stimulates research in all directions because of its ability to change color, survive low oxygen, and eat whatever it wants.

Admittedly, one is fiction and the other is not. Mieville's Kraken may therefore be praised for what it does well in the realm of fiction: particularly character and plot. The heroes are plenty of fun, and they come with a pleasant diversity of motivations and alliances, but the villians really shine. They are all deliciously horrible in such different ways that you almost want to just pit them against each other rather than get any of the heroes involved. (Important note: the viciousness of the villians makes for some very violent scenes. If it were made into a movie I would definitely not watch it, for fear of nightmares.)

Shell and Mantle, who is the reason I have a copy of the book to read, commented that it was "a little too hipster and not enough nerd." I can sympathize with the sentiment--I thought the heroes all seemed a little too cool, a little too confident, a little too cynical. Plus they all cuss the air blue, some more than others, so let that be a warning to anyone who prefers to avoid such language in high concentrations--and the concentrations I'm talking are parts-per-ten, not parts-per-thousand.

But my geekiness reminds me: the novel is in fact very nerd, in addition to being pretty hipster. I mean, our main character's a malacologist, and the plot hinges on the mystical power of a preserved giant squid. Miéville did his research. In addition to mentioning both Kubodera and O'Shea, the plot dives all the way back to Streenstrup, the scientist who first described Architeuthis in the 1800's. Given how much of science fiction is really physics fiction or computer fiction, it was delightful to read a piece of real biology fiction, and marine biology fiction at that. (Reminds me of Zodiac, in fact.)

Of course, the other Kraken is a good deal heavier on the marine biology. But while I'm thinking about plot and character, I might as well consider Williams' book from that standpoint too, for such features are not the sole province of fiction.

Plot I would say it has very little. It is not one of those science books that follows a thread of discovery, a research expedition, or even a single animal (despite periodic returns to Dosidicus, there are entire chapters about octopuses, which aren't squid at all). Instead, Kraken is the romping of a curious mind through all the bits and pieces of science that touch on squid. Ecology, neurobiology, consciousness, symbiosis--the narrative hops from one to another at the slightest provocation.

In character, however, the text is rich. The diversity of topics led Williams to meet a great diversity of scientists and animals. Julie and Dosidicus gigas are the stars, but there are also such characters as Joe DeGiorgis, a neuroscientist who used to have his own business dissecting and shipping squid parts, and his Loligo pealeii. Then there's Wilson Menashi, a retired engineer who volunteers at the New England Aquarium, and his Octopus dofleini. And many, many more--including me.

The science in Williams' Kraken is solid, and in reading it I re-learned things I had forgotten years ago. You will not learn nearly so much from Mieville's Kraken, but then Mieville is a faster read, so perhaps the rate of learning would not be so drastically different.

It should be noted, in closing, that Williams' book has a subtitle--The curious, exciting, and slightly disturbing science of squid--which makes a much more accurate title than simply Kraken. The kraken, after all, is a mythical beast by definition. I strongly suspect that even if we go on finding larger and larger species of squid, bigger than the giant, bigger than the colossal, we will never name them kraken.

After all, as Steinbeck said, men really need sea monsters in their personal oceans.
Squid A Day
More Articles All Articles
About