News Staff
Sailors have told tales of giant tentacled sea monsters for millennia. In ancient times, it was the Kraken. In more recent work, Jules Verne delighted and terrified the public while reading 20,000 Leagues Under The Sea.

The monstrous Architeuthis dux, the giant squid, must have been terrifying to ancient mariners. They were the size of modern school buses, never a good thing when you are in a wooden trireme, with eyes as big as dinner plates and tentacles that can snatch prey 10 yards away.

During an evolutionary scale when most creatures got smaller, how did this squid get so big?
Publication of its full genome sequence may give us clues. 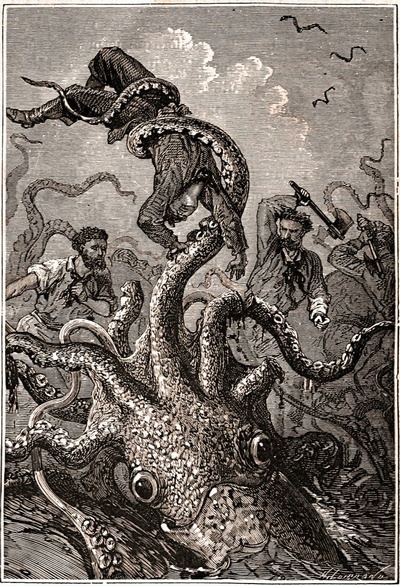 A rare sighting now as then

Giant squid are rarely sighted and have never been caught and kept alive, meaning their biology (even how they reproduce) is still largely a mystery. The genome sequence can help.

"In terms of their genes, we found the giant squid look a lot like other animals. This means we can study these truly bizarre animals to learn more about ourselves," says Dr. Caroline Albertin of the Marine Biological Laboratory (MBL), Woods Hole, who in 2015 led the team that sequenced the first genome of a cephalopod (the group that includes squid, octopus, cuttlefish, and nautilus).

The giant squid genome is also big. At around 2.7 billion DNA base pairs, it's about 90 percent the size of the human genome. Important developmental genes in almost all animals (Hox and Wnt) were present in single copies only in the giant squid genome. That means this gigantic, invertebrate creature - long a source of sea-monster lore - did not get so big through whole-genome duplication, a strategy that evolution took long ago to increase the size of vertebrates.

Analysis identified more than 100 genes in the protocadherin family -- typically not found in abundance in invertebrates -- in the giant squid genome. Protocadherins are thought to be important in wiring up a complicated brain correctly and were thought to be a vertebrate innovation. Albertin says they were really intrigued to find more than 100 of them in the octopus genome (in 2015). That seemed like a smoking gun to how you make a complicated brain. They found a similar expansion of protocadherins in the giant squid, as well.

The team also analyzed a gene family that (so far) is unique to cephalopods, called reflectins. "Reflectins encode a protein that is involved in making iridescence. Color is an important part of camouflage, so we are trying to understand what this gene family is doing and how it works," Albertin says.

So how did it get so big?

"A genome is a first step for answering a lot of questions about the biology of these very weird animals," Albertin said, such as how they acquired the largest brain among the invertebrates, their sophisticated behaviors and agility, and their incredible skill at instantaneous camouflage. "While cephalopods have many complex and elaborate features, they are thought to have evolved independently of the vertebrates. By comparing their genomes we can ask, 'Are cephalopods and vertebrates built the same way or are they built differently?'"
News Articles
More Articles All Articles
About