Climate Council: Without Action, Rising Seas Will Cost Us Billions
By The Conversation | September 17th 2014 08:30 AM | Print | E-mail 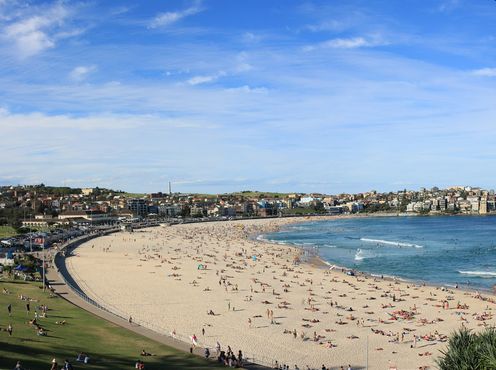 “I Do Like to Be Beside the Seaside” holds true for many Australians who live on or near the coast. On top of the many lifestyle amenities coastal living offers, much of the country’s crucial infrastructure (such as road and rail networks, hospitals, water treatment works and waste disposal facilities) is located along our coastline.

Virtually all of this infrastructure has been designed and built for a stable climate, yet we are living in a new climate system that is no longer stable.

Rising sea levels pose huge financial, economic and humanitarian risks, as shown by the Climate Council’s latest report, Counting the Costs: Climate Change and Coastal Flooding. If the world ignores the problem, by mid-century rising seas could cost the world more than a trillion dollars a year as floods and storm surges hit.

How much will the seas rise?

Climate change is warming the oceans and increasing the flow of ice from the land into the sea. This drives up sea levels, causing coastlines to recede and making flooding more widespread. The primary cause of the 17 cm global average sea-level rise observed during the second half of the 20th century is the increase in greenhouse gases in the atmosphere from human activities. And sea level is likely to increase by 0.4 to 1.0 m through the 21st century.

Strong action to reduce greenhouse gas emissions would keep sea-level rise towards the lower end of that range, while a business-as-usual approach to burning fossil fuels would drive it towards the upper end of the range – with potentially massive economic consequences.

Coastal flooding has caused, and is projected to cause, severe damage to economies without adaptation and drastic mitigation measures. Hurricane Katrina, which hit the southern United States in 2005, caused US$100 billion (A$110 billion) in damage and about 2,000 deaths.

Seven years later, Hurricane Sandy caused US$19 billion in damage to public and private infrastructure and property in New York City alone, as well as hitting other locations along the US east coast and in the Caribbean.

Forget about the Tom Cruise movie Risky Business - the recent report of the same name, Risky Business: the Economic Risks of Climate Change, led by former New York Mayor Michael Bloomberg, is much more apt. It starkly sets out the economic risks of climate change to the United States, including the threat of damage to coastal property and infrastructure from rising sea levels and increased storm surges.

The report predicts that in just over a decade, this double whammy of higher sea levels and storm surges will more than double the costs of coastal storms along the US eastern seaboard and the Gulf of Mexico, to US$3.5 billion a year. Hurricanes Katrina and Sandy are harbingers of things to come. If the threat of a climate-driven increase in sea level goes unabated, the projected increases in economic damage will be significant. According to a 2011 federal government assessment, more than A$226 billion (in 2008 dollars) in commercial, industrial, road and rail, and residential assets around Australia’s coasts are potentially exposed to flooding and erosion hazards if seas were to rise by 1.1 m (high end scenario for 2100).

In southeast Queensland, without adaptation, a current 1-in-100-year coastal flooding event would probably cause about A$1.1 billion in damage to residential buildings. With a 0.2 m rise in sea level, a similar flooding event would increase the damages to around A$2 billion, and a 0.5 m rise in sea level would raise projected damages to A$3.9 billion.

By 2050, if the threat of sea level rise is ignored, the worldwide losses from coastal flooding (and land subsidence) are projected to hit US$1 trillion per year – roughly the size of the entire Australian economy.

Putting the squeeze on natural ecosystems

Many coastal and near-shore marine ecosystems, such as mangroves, saltmarshes and seagrass beds, may become trapped in a “coastal squeeze” as rising sea levels come up against fixed landward barriers such as seawalls and urban infrastructure.

Damaging these ecosystems has detrimental flow-on effects to water quality, carbon storage, and fisheries. Sea-level rise is increasing the salinity of coastal groundwater and pushing salty water further upstream in estuaries, affecting the health of salt-sensitive plants and animals. Saltwater intrusion from rising sea levels is contributing to the loss of freshwater habitats in coastal regions such as Kakadu National Park. Meanwhile, some corals may not be able to keep up with periods of rapid sea-level rise, which would cause reefs to “drown”.

Australia’s beautiful sandy beaches – a major attraction for Australia’s multi-billion dollar tourism industry – are at risk from coastal erosion. And it’s not just the tourism dollar that is being eroded. Feeling the squeeze: many mangroves could be left with nowhere to live. Rob and Stephanie Levy/Wikimedia Commons, CC BY

Rising sea level is eroding the viability of coastal communities on Pacific Islands and in low-lying areas of Asia, increasing the likelihood that people will need to resettle elsewhere. Several Torres Strait Island communities live in extremely low-lying areas and already experience flooding during annual high tides. Building seawalls and raising houses can buy time, but in the long term several of these communities may face relocation.

A sea-level rise of 0.5-2.0 m could displace between 1.2 million and 2.2 million people from the Caribbean region and the Indian and Pacific Ocean islands, assuming that no adaptation occurs.

The impacts of climate change and coastal flooding are potentially huge. Rapid and deep cuts in greenhouse gas emissions are crucial, both in Australia and around the world, if we are to stabilise the climate and slow the seas' rise.

If we don’t manage it, then being beside the seaside might turn out not to be so enjoyable after all.

Martin Rice, Research Manager, The Climate Council of Australia and Honorary Associate, Department of Environment and Geography at Macquarie University, is the Research Manager of the Climate Council, an independent non-profit organization funded by donations from the public. Its mission is to provide authoritative, expert advice to the Australian public on climate change.

Lesley Hughes, Professor, Department of Biological Sciences at Macquarie University, receives funding from the ARC for her work as an ecologist and expert on the impacts of climate change on species and ecosystems. She is the Co-Director of the Climate Futures Research Centre at Macquarie University and the Director of the Biodiversity Node of the NSW Adaptation Research Hub. She is also a member of Climate Scientists Australia and the Wentworth Group of Concerned Scientists.

Will Steffen, Adjunct Professor, Fenner School of Environment and Society at Australian National University, does not work for, consult to, own shares in or receive funding from any company or organization that would benefit from this article, and has no relevant affiliations.