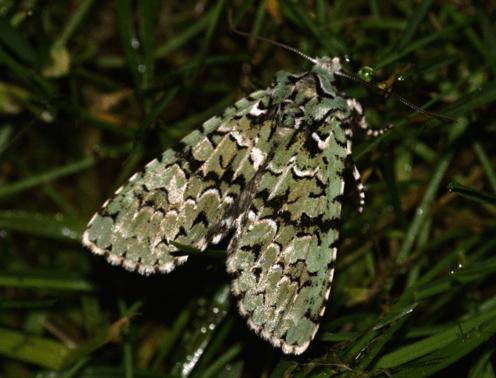 Butterflies aren't the only ones with snazzy stripes. Ben Sale, CC BY

By Callum Macgregor, University of Hull

Ask people to describe what they associate with butterflies, and you will probably get an image of a sunny summer’s day, with a beautiful peacock drifting gently on the cooling breeze.

Ask the same question but for moths, and you are more likely to be told about holes in a favorite wool sweater, or something small and brown beating itself to death against a bathroom light fitting. We don’t view moths with the same affection as their day-flying cousins, and the irrational fear of moths is even common enough to have a name: mottephobia.

To my mind, this is unfair. Let’s start with the clothes-eating accusation. According to the charity Butterfly Conservation (which also protects moths), there are around 2,500 species of moths found in the UK; of these, only two will attack clothes. They prefer dirty items in undisturbed places: that means that if your jumper has been attacked, you probably weren’t wearing it often enough anyway.

In fact, there are also moth species that are crop pests, such as the diamondback moth, and some which produce irritant hairs as caterpillars – the non-native oak processionary moth currently infesting London is one such example. But again, these examples are very much in the minority among the total diversity of moths, and there are very many more reasons to love moths than to hate them. Many moths are just as beautiful as butterflies; some even look like butterflies! A particular favorite of mine is the brimstone moth: exactly like the brimstone butterfly, it is so-called for its vivid sulfur-yellow color. Some are superbly camouflaged, like the buff-tip – easily mistaken for a broken twig of silver birch. And some have attractive names to match their appearance, such as the fabulous Merveille du Jour (“marvel of the day”), pictured at the top of this article.

But beyond their beauty, moths also perform vital roles in the natural communities to which they belong. Along with colleagues, I recently examined the scientific literature to establish how important moths are to flowering plants as providers of pollination services. Most moth species that feed as adults do so by drinking nectar, and in doing so accidentally carry pollen between flowers.

In the UK, moths might be pollinating wildflowers near you including honeysuckle, bramble, white campion, wild carrot, thistle and ragwort. In North America, moths pollinate many types of cactus, and milkweed (beloved of caterpillars of the monarch butterfly). Globally, they are also well-known pollinators of many orchid and lily species.

If you’re a bird or a bat, a moth makes for a tasty treat. Researchers from the University of Bristol have examined the diet of two species of long-eared bat in England, revealing that their main food source was large-bodied moths from the Noctuidae (or owlet moth) family. Whereas bats (and the eerie nightjar) eat adult moths, moth caterpillars provide a vital food source in the spring for young birds including blue tits, which can munch their way through 35 billion caterpillars in the UK every year. Especially important in this regard are those moth species that are active as adults through the winter, including the aptly named winter moth; these species reach the caterpillar stage of their life cycle at exactly the right time of year for busy blue tit parents to exploit.

And did you know that one species of moth has been domesticated into a valuable commercial livestock species, at the center of a multi-billion dollar global industry? When spinning a cocoon in which to undergo the transformation to an adult moth, the caterpillars of the domesticated silkmoth Bombyx mori produce lustrous threads several hundred metres in length. These threads, once unraveled, are spun into the fine textile silk.

And if none of this has convinced you, know this: butterflies are actually just a minor subset of moths!

Callum Macgregor , PhD student in Ecology at University of Hull, is funded by an Industrial CASE studentship from the Natural Environment Research Council, with Butterfly Conservation as the CASE partner (Grant ID: NE/K007394/1).