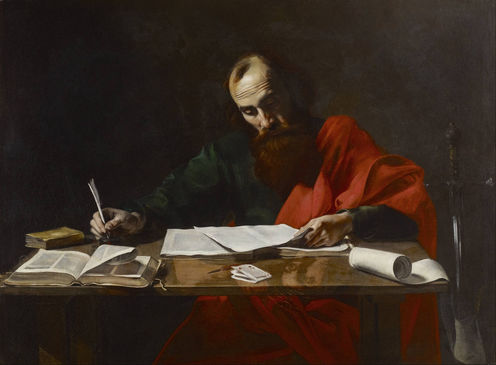 Early Christian writers were fond of putting words into other people’s mouths.

When the apostle Paul (the theologian formerly known as Saul of Tarsus) wrote to the church in Corinth about a particularly significant religious experience, he informed them that his journey to the “third heaven” or “Paradise” resulted in his hearing “things that are not able to be told, that no mortal is permitted to speak”.

That didn’t stop later writers from having a go at communicating what Paul heard and saw. We know of at least two texts containing a good deal of speculation about heaven. In contrast to Paul’s own account, the mythological detail in these accounts is rich and in many cases has proved to be deeply influential.

In the shorter and probably earlier text, The Apocalypse of Paul, discovered in 1945/6 as part of the library at Nag Hammadi, God’s Spirit takes the form of a little child who speaks to Paul and then catches him up not just to the third, but all the way to the tenth heaven.

At heaven number three Paul is still able to see the earth below. By heavens number four and five he is in the realm of angels. Number six is the place of a “great light” and number seven is the place where Paul now sees “an old man”. By the time Paul gets to level ten, he is (re)united with “fellow spirits”, although the detail for these upper echelons is pretty sparse.

In the longer, 3rd/4th century text of the same name Paul takes a similar heavenly journey with hymn-singing angels, gates of gold, and an old man to greet him. But the overall tone of the work is far more sinister, culminating in chapters 31–44 with a description of a hell occupied by lukewarm and rebellious sinners, and a few church leaders. Their fate, of course, is that of eternal punishment, weeping, and gnashing of teeth. This Apocalypse of Paul proved to be a popular work across Christendom. Originally written in Greek, it was translated into Latin, Coptic, Syriac, Slavonic and Ethiopic.

These texts belong to a genre that we might call “early Christian apocalypse”. They draw on and develop traditions that take us back past the book of Revelation in the New Testament to the heavenly journey accounts and apocalyptic speculations of a good part of Second Temple Jewish literature, such as the book of Daniel and 1 Enoch.

These provide subsequent Christian tradition with the basic fund of imagery that, mediated through Dante, Renaissance paintings such as Michelangelo’s Last Judgement, and countless sermons, hymns, and devotional resources, continues to inform popular opinion about what Christians mean when they talk about “heaven”, or “hell”. So deeply embedded are these notions that many accounts of near-death experiences simply replicate them in narratives of a journey along a tunnel, a beckoning light, a kindly presence and reunification with loved ones.

Certainly, by the early medieval period the typical motifs associated with heaven and hell, understood as post-mortem territories of eternal bliss or everlasting damnation, are all in place.

However, the earliest sources, including Paul’s letters, show very little interest in the mythological details of heavenly existence or the precise nature of eternal torment. For Paul, what is important about heaven is not that it awaits us when we die, but that it confronts us in this life.

Paul uses the language of “apocalypse” not to describe the great cosmic settling of scores in which people are either welcomed by a kindly deity, or tortured in the lake of fire, but to speak of a reality, a power, a life that encountered him with such force that he turned from being a persecutor of the church to becoming its first and arguably greatest theologian.

the God who set me apart before I was born was pleased to reveal God’s son in me, so that I might proclaim him among the Gentiles.

The later writer of the Acts of the Apostles dramatizes this encounter by having Paul struck down by a “light from heaven” with accompanying divine voice. Heaven, by this account, is important by virtue of the changes it effects in the here and now.

This kind of heaven then becomes capable of providing an alternative hope to that for life beyond death, prompting instead a radical transformation of life before death; less anticipation, and more interruption. The Assumption of the Virgin, by Francesco Botticini. 15th century. Wikimedia Commons.

The Pauline heaven, in contrast to that found in the pages of the Apocalypse of Paul can serve as what Alain Badiou calls a “truth-event”, defined in turn by the philosopher and critic Slavoj Zizek as:

a radically new beginning […] the violent, traumatic, and contingent intrusion of another dimension not “mediated” by the domain of terrestrial finitude and corruption.

In the original version of Paul’s journey to the third heaven, the only messenger that the apostle meets is an “angel of Satan”. Paul is inflicted with a “thorn in the flesh” that sends him packing, back to the real, conflicted world of “weaknesses, insults, hardships, persecutions, and calamities”.

But the encounter and the thorn leave their decisive mark as Paul learns to live with the weakness of his creaturely existence. They are revelatory.

We may have little use today for angels, and God is certainly no old man in the sky, waiting for us at the gates. But Paul’s religion might continue to point to a different kind of heaven. As Princeton philosopher Mark Johnston puts it in his critique of religion and thus of all systems of certainty and consequent potential oppression:

[t]he only thing that can set us right is a katalepsis, a seizure by grace, something transformative entering from outside our fallen natures.

This is a different kind of heaven; one, perhaps, that we will always need.