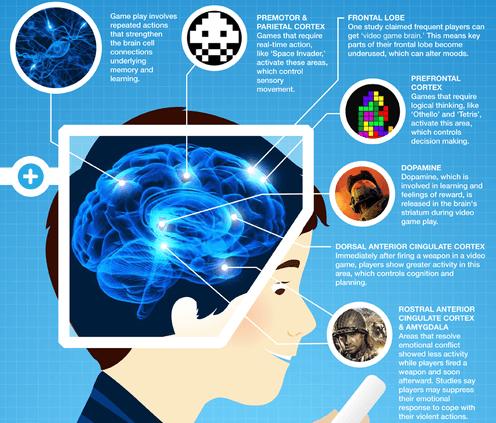 Brains on games. OnlineUniversities.com,  CC BY

Whether playing video games has negative effects is something that has been debated for 30 years, in much the same way that rock and roll, television, and even the novel faced much the same criticisms in their time.

Purported negative effects such as addiction, increased aggression, and various health consequences such as obesity and repetitive strain injuries tend to get far more media coverage than the positives. I know from my own research examining both sides that my papers on video game addiction receive far more publicity than my research into the social benefits of, for example, playing online role-playing games.

However there is now a wealth of research which shows that video games can be put to educational and therapeutic uses, as well as many studies which reveal how playing video games can improve reaction times and hand-eye co-ordination. For example, research has shown that spatial visualization ability, such as mentally rotating and manipulating two- and three-dimensional objects, improves with video game playing.

To add to this long line of studies demonstrating the more positive effects of video games is a study in the Proceedings of the National Academy of Sciences by Vikranth Bejjanki and colleagues. Their newly published paper demonstrates that the playing of action video games – the sort of fast-paced, first-person shooters beloved by doomsayers in the media – confirms what other studies have revealed, that players show improved performance in perception, attention, and cognition.

In a series of experiments on small numbers of gamers (10 to 14 people in each study), the researchers reported that gamers with previous experience of playing such action video games were better at perceptual tasks such as pattern discrimination than gamers with less experience.

In another experiment, they trained gamers that had little previous experience of playing action games, giving them 50 hours practice. It was showed that these gamers performed much better on perceptual tasks than they had prior to their training. The paper concludes:

The enhanced learning of the regularity and structure of environments may act as a core mechanism by which action video game play influences performance in perception, attention, and cognition.

In my own papers, I have pointed out many features and qualities that make video games potentially useful. For instance, in an educational context, video games can be fun and stimulating, which means it’s easier to maintain a pupil’s undivided attention for longer. Because of the excitement, video games may also be a more appealing way of learning than traditional methods for some.

Video games have an appeal that crosses many demographic boundaries, such as age, gender, ethnicity, or educational attainment. They can be used to help set goals and rehearse working towards them, provide feedback, reinforcement, self-esteem, and maintain a record of behavioral change.

Their interactivity can stimulate learning, allowing individuals to experience novelty, curiosity and challenge that stimulates learning. There is the opportunity to develop transferable skills, or practice challenging or extraordinary activities, such as flight simulators, or simulated operations.

Because video games can be so engaging, they can also be used therapeutically. For instance, they can be used as a form of physiotherapy as well as in more innovative contexts. A number of studies have shown that when children play video games following chemotherapy they need fewer painkillers than others.

Video games have great educational potential in addition to their entertainment value. Games specifically designed to address a specific problem or teach a specific skill have been very successful, precisely because they are motivating, engaging, interactive, and provide rewards and reinforcement to improve.

But the transferability of skills outside the game-playing context is an important factor. What’s also clear from the scientific literature is that the negative consequences of playing almost always involve people that are excessive video game players. There is little evidence of serious acute adverse effects on health from moderate play.

Dr. Mark Griffiths, Director of the International Gaming Research Unit and Professor of Gambling Studies at Nottingham Trent University, has received research funding from a wide range of organizations including the Economic and Social Research Council, the British Academy and the Responsibility in Gambling Trust. He has also carried out consultancy for numerous gaming companies in the area of social responsibility and responsible gaming.