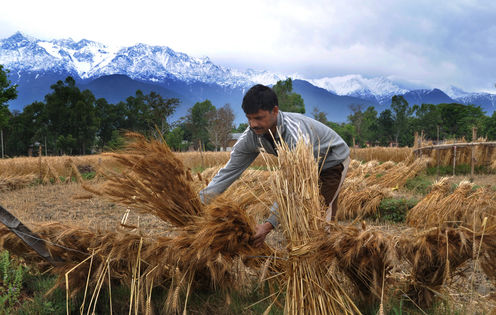 By Zongbo Shi, University of Birmingham

Pollution from soot and ozone has caused a major decrease of crop yields in India, with some densely populated states experiencing 50% relative yield losses. To ensure the world has enough food, we need to look directly at air pollution.

Jennifer Burney and Veerabhadran Ramanathan from the University of California, San Diego systematically investigated the impact of air pollution and anthropogenic climate change on crops in India, where yields have leveled off or decreased in recent decades despite continued improvements in agricultural technology.

Their study showed that overall air pollution has caused a third of loss in wheat yield and one fifth of loss in rice yield in India in 2010, using 1980 as a baseline. Their findings are published in the journal Proceedings of National Academy of Sciences.

Many previous works have studied the impact of climate change on crop yield. However, this new study suggests that air pollution from ozone and soot caused far more loss of crop yield than climate change.

Ozone is a gas formed in the atmosphere through chemical reactions of precursors including nitrogen oxides (NOx) and volatile organic compounds (VOCs) in the presence of sunlight. NOx are mainly generated from fossil fuel combustion while VOCs are emitted from both natural sources and human activities.

Ozone damages crops by entering leaves during normal gas exchange. As a strong oxidant, ozone causes symptoms in crops such as yellowing, cell injury, tiny light-tan irregular spots, bronzing, and reddening. This directly affects the growth of crops and thus reduces their yield. The effects of ozone on soybeans. NASA

Ozone is the key pollutant causing the yield loss of crops, for example wheat, which is very sensitive to ozone exposure. Ozone exposure could have an even bigger impact on yields of soybean, peanut and cotton.

The picture is unlikely to improve any time soon. My colleague William Bloss, an expert in atmospheric chemistry, points out that background ozone levels have approximately doubled since the earliest measurements (performed near Paris in the 1870s).

“Looking to the future”, he says, “models predict that ground level ozone will continue to rise in many areas of the world”. Ozone pollution will continue to be a major challenge for food security.

It is important to note that there are significant regional variations in the crop yield loss in India, with some states seeing more than 50% losses in wheat yield, mainly due to air pollution. This has significant implications for other developing countries, in particular China.

Since the emission of soot and ozone precursors is significantly larger in China than in India, the impact of air pollution on Chinese agriculture is expected to be even larger than that in India. China is now the world’s largest food importer. Could air pollution in China have led to the thirst for food in the global market?

Fortunately ozone and black carbon have short atmospheric lifetimes (unlike some greenhouse gases which can linger for decades or centuries). This means there is a strong, direct benefit to addressing such pollution, and it would be apparently relatively soon.

Zongbo Shi, Birminghem Fellow/NERC Fellow at University of Birmingham, does not work for, consult to, own shares in or receive funding from any company or organization that would benefit from this article, and has no relevant affiliations.