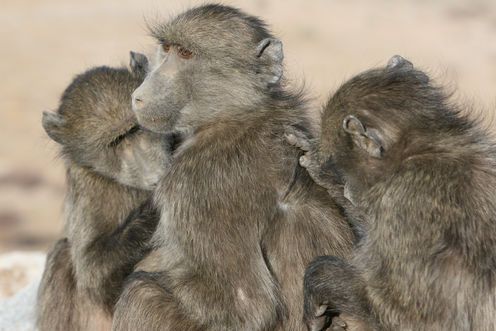 “Birds of a feather flock together” is a saying that exists in a number of different languages. “Gambá cheira gambá” (opossums smell other opossums) in Brazilian Portuguese is a particularly colorful example.

The reason is that like-minded people like to hang out together across many cultures. And it seems the same is true of baboons.

Baboons' preference to spend time with similar personality types was revealed in a study of wild chacma baboons in Namibia. It found that the monkeys typically associate with other baboons based on personality type, age, rank and propensity to generate or use information. However, the study also found that this kind of cliquey behavior hindered information sharing.

For example, shy, high-ranking baboons often missed out on where to find the latest food sources as that information was typically held by bolder and younger baboons.

Perhaps there is a lesson there for us humans, reminding us that having a diverse set of friends may actually be an asset?

Social media sites such as Facebook are supposed to be democratizing the world as they provide us with greater contact between individuals. In theory we have access to a world of information. But let’s be honest, our choice of friends is often guided by our interests, age and backgrounds. No one person’s Facebook is a random sample of the world’s population. Therefore the information shared is limited.

More than 90% of my friends on Facebook are biologists but I do not have friends who work in politics. This means that while I get the inside scoop on what is happening in biology – politics tend to take me by surprise.

That’s not to say that associating with individuals of similar types doesn’t make a great deal of sense. Along with being a biologist I am also a father of two small children and therefore hang out with the parents of my kids’ friends, who are a great source of friendship and support. Are we reading too much into social media? Damien Basile, CC BY-SA

But while it may be easy to see why people like to form cliques, it is less obvious why animals do this. Female primates with young offspring often form a social group. Some of the benefits of this are practical – such as opportunities for their offspring to play together – but it may also be driven by the unique challenges this group of individuals faces.

Adult males are more mobile than females, which creates an uneven competition for access to food. But as a group, these females are able to collectively look for food away from the males.

The study found that in chacma baboons it is younger and bolder individuals that typically try something new such as a strange food item or innovate in how to access a new food resource. The researchers were able to determine these associations by looking at who groomed who. Primates use grooming not only for hygiene, but also to make friends.

Similarly, studies in fish have suggested that positive association by personality type may increase cooperation between individuals – such as bolder individuals approaching a predator together to see if it is hungry or not.

But if you are a shy individual, not associating with bold peers you might be in trouble because you’ll have no way of knowing that the predator is hungry.

I get on the same train every day to work and therefore sit next to people who have the same working hours in roughly the same geographic location. But as this association is a matter of temporal and geographic convenience they do not influence what I do. However, I do take the highly selected information I get from my friends seriously and may act upon it – if it is in my benefit. Can’t wait to share this with Jo and Steve. Tjeerd Wiersma, CC BY-SA

For most social species, having the right kind of friends – which often means friends with similar personality – will enhance their chances of survival. But this may come at the cost of limited information flow.

The irony of living in a social network where information could flow freely is that by choosing your friends you limit your access to information. So before you unfriend that person on Facebook for uploading yet another “funny” cat video: remember variety is the source of information and not necessarily the spice of life.

By Robert John Young, Professor of Wildlife Conservation at University of Salford. This article was originally published on The Conversation. Read the original article. Top image credit: Alecia Carter