Tommaso Dorigo
Among the many things that CMS and ATLAS physicists are looking forward to checking up, using the data that the LHC is starting to deliver from 13 TeV proton-proton collisions, one is the WH resonance signal that CMS found in a recent analysis. Mind you, "signal" here is a misnomer: what was seen was most probably a insignificant fluctuation of the background; yet we must keep our mind open to interpretation changes.

The search I am talking about is one CMS did for boosted Higgs bosons recoiling against boosted W bosons, in a "back-to-back" topology (paper is here).

If a very heavy resonance decays like in the Feynman diagram shown below, the two bottom quarks into which the Higgs may decay will be pushed by the energy release to travel almost collinearly, and will thus fragment in what can be observed experimentally as a "fat jet": a single wide energy deposit in the calorimeter, within which some substructure can be detected with the advanced tools that have been developed in the recent past. Similarly, the two decay products of the W boson are also going to be almost collinear: by detecting an energetic electron or muon, and significant missing transverse energy, one knows very well where the neutrino went, as its longitudinal direction must not be too different from that of the charged lepton.

The quite special nature of the signature described above makes these events quite rare. In fact, one expects less than one background event with a total WH invariant mass above 1.5 TeV.

On the other hand, a signal would be reconstructed as a narrow peak in the mass distribution. How narrow ? Well, you can see for yourself in the distributions below: a tentative signal from a W' resonance decaying to WH is drawn as the Gaussian-like curves in black. 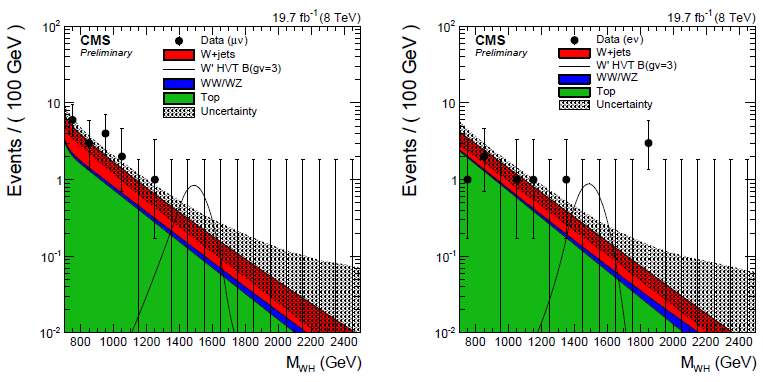 The figure shows the data selected by the CMS search (black points with error bars), which applies b-tagging within the fat jet, a selection aimed at detecting the kind of sub-structure expected for a Higgs boson, plus a series of kinematical selection cuts aimed at reducing backgrounds (coloured functions stacked one over the other, with a grey uncertainty band on top).

Electron (on the right) and muon (left) events are considered separately, as the leptons carry along different background contamination and have a different measurement resolution which is especially important at high energy.

If you look at those distributions with a sceptical eye, you will probably say "so what?". Indeed, there is not much to say: the muon data appears to follow closely the background expectation; the electron data is just a bit wierder, with a different slope and with three events piling up in a single lonely bin at 1800 GeV. What to make of it ?

Of course, one can compute the local significance of that excess in many ways. One could ask "what is the probability that I see three events in that bin, when I just expect 0.07 (with some 50% or larger uncertainty) from background sources?". That number would be in the whereabouts of three standard deviations, but the question is a very silly one. Who cares about events piling up here or there, or spreading evenly, or in every third bin ?

What we care for is a reasonable hypothesis - an exciting one, if possible - about the provenance of those events. So one can try to fit them to a W' decay shape, obtaining a local significance of about 2.9 standard deviations. Taking however into account the fact that no signal is observed in the muon channel, and the fact that we did not know where to look for a signal beforehand (the look-elsewhere effect), one ends up with a global significance of the CMS data amounting to 1.9 standard deviations. Nothing exciting, really - something which should be expected to happen one in twenty times or so.

And yet, many are looking forward to the new data to see if more events will be found piling up in that 1.8 TeV region. Indeed, there are reasons for this. The ATLAS collaboration has recently released the result of a different search for resonances decaying to pairs of boosted objects, finding 3-sigmaish local effects in more or less the same mass range. Could it be that our teachers, who taught us that since we were children that "new physics will show up at the TeV scale" were just wrong by a factor of two ? That is the question we should be asking.

Hopefully, we will get a tentative answer in less than six months. And more questions, too. Because science progresses by asking relevant questions much more than it does by providing answers.
A Quantum Diaries Survivor
More Articles All Articles
About