Tommaso Dorigo
I have recently been reproached, by colleagues who are members of the competing ATLAS experiment, of misusing the word "see" in this blog, in the context of searches for physics signals. That was because I reported that CMS recently produced a very nice result where we measure the rate of H->bb decays in events where the Higgs boson recoils against a energetic jet; that signal is not statistically significant, so they could argue that CMS did not "see" anything, as I wrote in the blog title.
I countered that we do measure the particle rate, in the hypothesis that the Standard Model is not absurdly weird (which would be the case if the Higgs boson we discovered in 2012 were found to *not* decay to b-quark pairs), so my use of the word, maybe a little deceiving in the title, was fully legitimate given the ample explanation I gave in the blog body.
Well, that was just one slight incident in the often much more turbulent life of a blogging HEP experimentalist. And the signature of H->bb is indeed a hard one to catch. In the absence of scores of new particles to discover, experimental collaboration end up challenging each other on more technical grounds: who sees that particular decay mode first ?  So the reaction of my ATLAS colleagues was quite understandable; besides, their irritation was maybe due to my blog stealing a little bit of thunder to a result that was still private but about to be delivered. In fact, soon thereafter ATLAS published a beautiful new analysis where they can *almost* claim they do see H->bb decays, in events where the Higgs candidate events are produced together with a vector boson. The money plot of that analysis is shown below. 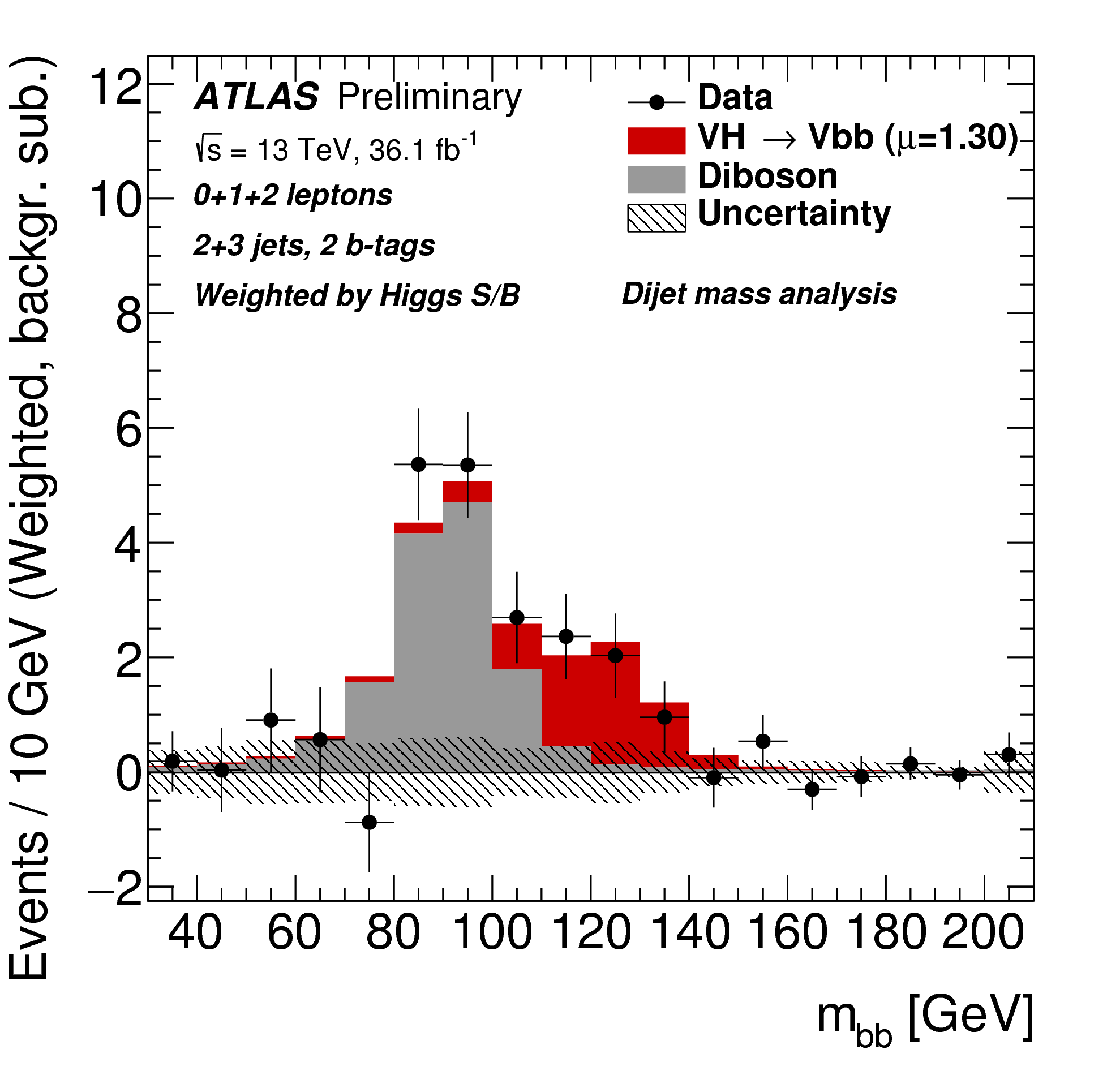 Beautiful, is it not ? Experimental data (black points, background-subtracted except for the VZ component, which is nice to see) obliges and distributes perfectly as predicted by the model, which is the red hump at 125 GeV pictured in red.

Now, the H->bb challenge ("who can claim to say they observe it?", where the word observe means "with a statistical significance of 5 standard deviations") is still technically on, although almost won by ATLAS. In tge meantime, there is another not less exciting challenge that has been going on in the Higgs arena: the one of observing Higgs boson decays to tau-lepton pairs. What about that one?

The Higgs boson is a very peculiar particle for many reasons, and one of them is that it can decay in a multitude of modes, many of which are at experimental reach. We have seen the Higgs decay signal into photon pairs and into Z boson pairs, and those two have collectively allowed us to declare discovery of the particle in 2012; and we have also seen the decay of the Higgs to W boson pairs. Those three decay modes, however, do not constitute the bulk of the decay probability.

The relevant branching fractions of a 125.09 GeV Higgs are the following (am omitting some here for brevity):

As you can see, the two modes that produced the discovery are not nearly the most frequent ones! They are, however, among the easiest to observe, because of the distinguishability of their signature - granted that you have a very precise electromagnetic calorimeter, in the case of photons.

In the list the top rate decay is to b-quark pairs, and I did talk about that. I did not mention the charm pairs, which are ***very*** hard to spot, as the charm quark does not produce a very distinguishable signature. I similarly omitted the H->gluon gluon decay, which is even harder than the one to charm pairs; I think we will never see it, at least where "see" is taken to mean what my ATLAS colleague want.

[NB I have been arguing that a five-sigma threshold for "discovery" of things we are virtually sure exist, and which do not imply a look-elsewhere effect, is way too tight, but I will not repeat those arguments here.]

And what about the taus ? Well, CMS recently produced a >5-sigma signal of that signature, finally. They presented it at the EPS conference in Venice, and I have received a request from one of you (in the comments thread of a former blog post) to discuss that analysis. So let it be here, but I will be brief as I am in a less-than-average blogging mood today, as I just lost my mother.

So the analysis (detailed in this document) looks for a signature of two energetic tau leptons, in various topologies. We search for H->tau tau in events where the Higgs candidate is produced alone (as much as this thing is possible in the horribly messy proton-proton collisions LHC generates), or where it is produced together with "vector-boson-fusion tagging jets", which are hadronic jets emitted at very large rapidity, i.e. basically almost collinear with the proton beams. One further signature is that of a Higgs decaying to two taus emitted at very high transverse momentum (e.g. recoiling against a energetic jet): that is advantageous as the boost of the Higgs reduces the background from other processes.

Of course, the tau leptons are sought in all their major decay signatures: the tau lepton is the heaviest one, and it may decay producing an electron and two neutrinos, or a muon and two neutrinos, or only light hadrons (charged and neutral pions) together with a neutrino. The technology to detect tau leptons has been perfected through years of studies targeting the Z->tau tau decay, which is copious and relatively easy to spot in proton-proton collisions.

The tau-pair signal can be best seen by combining all three categories together in bins of the logarithm of the signal fraction expected in each of the studied bins of  the single- or double-dimensional distributions. At high values you can clearly see the excess from Higgs decays in the graph below, also shown in an inset. The final result of the CMS search is a measurement of the signal rate in each category; the three then produce a combined cross section estimate, as shown in the graph below. The result is 1.06+-0.25 times the SM expectation. The signal has a statistical significance of 4.9 standard deviations, and when combined with previous CMS results it goes well above the five-sigma mark - so yes, CMS "SEES" the H->tau tau decay :)