Tommaso Dorigo
In the previous post I discussed the generalities of "diboson production" at the LHC. Dibosons are pairs of elementary bosons - the photon (carrier of electromagnetic interactions), the W and Z bosons (carriers of the weak interaction, respectively charged and neutral), the gluon (carrier of the strong interaction, and coming in 8 undistinguishable varieties), and the Higgs particle.
Looking for proton-proton collisions of high energy that give rise to resonant pairs of elementary bosons gives access to a host of new physics scenarios. In all cases (but one, which I maybe will touch on later) we are talking about a signature involving a bump in a mass distribution: seeing a bump means that you are indeed producing a resonant phenomenon, and you can call the originator a particle. As much as it may be mindboggingly short-lived (we are talking about 10^-25 seconds and less, for many of the new particles discussed here), that particle exists, in a sense that subnuclear physicists subscribe to.

Theoretical extensions of the SM

The simplest extensions of the Standard Model (SM) one can think of involve the addition of a new U(1) group to the theory structure. The electroweak part of the SM as we know it is said to be described by the combination SU(2) x U(1), which only means that the interactions can be represented by the generators of two symmetry groups: the W+, W-, and Z0 from the SU(2) group, and the photon (after a proper rotation) from the U(1) group. If you add another U(1) to the mixture, you allow for the existence of a new neutral boson - a heavy Z particle.

Why heavy ? Because if it was massless we would know about it, doh! In general, we are only allowed to imagine SM extensions that we have not yet excluded by investigations with past accelerators, so we are bound to believe that this new resonance, if it exists, is beyond the reach of previous machines.

And why should we do that ? I mean, okay, you can add a U(1) group to the mix, but you could just as well add lime juice. The rationale is that we believe that the physics we observe around us - the SM-driven physics we have measured so far - originates from a more "unified" group structure that is only relevant at *much* higher energy, which decomposes in the parts we know of (SU(2)xU(1), the SM) and some other group that comes into play at an intermediate energy scale.

The additional group coming into play at an intermediate scale, and the associated extra Z' boson, is an example of the common attempt at explaining the naturalness problem, which I am afraid does not fit in this post (hint: the Higgs boson is too light if there is no extra new physics at some higher energy scale that "explains" its lightness with respect to the much higher energy scale of the unification). So theorists have proposed a host of new physics models that include Z' bosons, or also W' bosons (when you include an extra SU(2)).

The extra bosons can decay into pairs of SM bosons: a Z' to WW and ZZ, but also to gluon pairs, while a W' may decay to WZ pairs, or WH... There are many possibilities to consider, so there is a host of search targets for LHC experimentalists. The problem is in fact that depending on the details of the new physics models, the phenomenology can vary dramatically, so the searches try to be as generic as possible, targeting generic signatures and interpreting the (always null) results in terms of "simplified models" that convert simplifying assumptions into a decrease of the number of free theoretical parameters they have to deal with.

Besides group additions, one attractive bunch of new physics models involve the existence of "large extra dimensions" (LED). This comes from an idea of the twenties of the last century, of Kaluza and Klein, revamped in 1998 by Randall and Sundrum, and then by other theorists. In a nutshell, one tries to explain the weakness of gravity with respect to the other forces by positing that we live in a 3-dimensional "subspace" of a higher-dimensional one. The theories describe gravity as capable of propagating out in the extra dimensions, thus "diluting" its strength in the subspace we live in.

In some versions of these LED theories, we should be able to observe some kind of process where a proton-proton collision produces a graviton, which might then decay e.g. into pairs of photons or pairs of Z bosons. So there you have it - another set of diboson signatures to consider. Recall the excitement of two years ago, when ATLAS saw a bump in their diphoton mass distribution: a graviton was thought to be one possible originator of that 750 GeV resonance... But theorists have a lot of fantasy, so they published some 650 articles with alternative interpretations. This alone shows you how rich can be the reach (pun intended) when you study diboson final states!

And then there is the Higgs sector. We found one Higgs particle in 2012, but we are not sure that that is all. In fact, the single Higgs scalar results from the "symmetry breaking" mechanism involving the addition of one complex scalar doublet in the SM Lagrangian density. If one added two complex scalars, one would still be able to generate the beneficial effects of symmetry breaking (the giving of a mass to the W and Z bosons, which was a huge problem until the sixties), but this would imply the existence of four other Higgs particles!

Of course we are actively searching for these additional Higgs particles at the LHC, and a big part of the signatures that those resonances could produce involve pairs of bosons. Without going in the details, you can imagine that a ZH resonance, e.g., would be a clean candidate of a pseudo-scalar neutral Higgs boson called "A". But there's many possibilities. Again, the number of searches is large, and the job of giving an overview of them is a tough one.

To adorn this otherwise text-only post with a graph, let me pick a plot produced in a CMS analysis to which I directly contributed. This is the search for A->ZH->llbb, i.e. when the Z boson is sought in its decays to a pair of leptons (electron-positron or muon pairs), and the SM Higgs is looked for in its decays to b-quark pairs. The graph shows the four-body mass distribution obtained after a kinematic fit that assumes the A->ZH decay (beneficial, as we know the Z and H masses and can thus improve the resolution on the A mass by doing that) from CMS data. 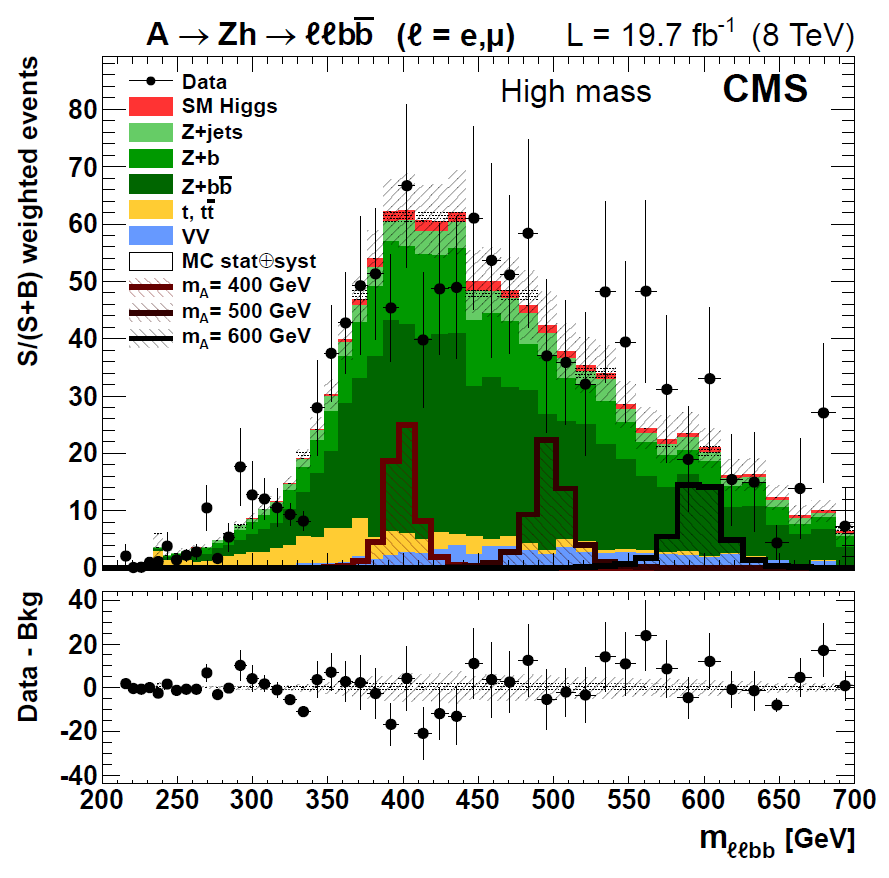 In the upper part of the graph the data (black points with uncertainty bars) are compared with expected backgrounds, that arise mainly from the production of a Z boson together with a pair of b-quarks that did not originate from a Higgs boson (in dark green). Note that the associated production of ZH pairs does contribute to the selected data, of course - it is the red histogram component; the signal of a A boson decay however would be much stronger, and would be reconstructed as a narrow peak, as shown by the three sample distributions (empty histograms) for A mass hypotheses of 400, 500, and 600 GeV. The lower graph shows the data minus expected background distribution, which has no significant deviations from zero.

A separate category, when we speak of elementary boson pairs, is the one constituted by gluon pairs. The gluon is massless, and is charged with the QCD colour charge. This means that when you produce a gluon endowed with large energy, kicked out from the interaction region, you get a stream of collimated hadrons, a jet. A x->gg decay signature thus involves looking for pairs of jets of high energy. This is a very common final state at the LHC, so backgrounds are high; on the plus side, if a new particle X were to decay into gluon pairs, that would mean that it "couples" strongly to the quarks and gluons present in the colliding particles - thus it would be produced with a large rate.

Needless to say, gluon-pair resonances are searched for with impetus by ATLAS and CMS; a number of searches in the tails of the mass distribution of jet pairs have been produced so far, placing lower limits on the mass of a gg decaying resonance (along with many qq and qg-decaying resonances, which however are not "dibosons" so I did not mention here) in the multi-TeV region.

All in all, there is a rich experimental program that targets boson pairs, with a number of different technologies. I feel I need to tell you a bit about those - but that's for another post!

Tommaso Dorigo is an experimental particle physicist, who works for the INFN at the University of Padova, and collaborates with the CMS experiment at the CERN LHC. He coordinates the European network AMVA4NewPhysics as well as research in accelerator-based physics for INFN-Padova, and is an editor of the journal Reviews in Physics. In 2016 Dorigo published the book “Anomaly! Collider physics and the quest for new phenomena at Fermilab”. You can get a copy of the book on Amazon.