Michael White
One of my recently developed rules: avoid the last minute rush. I don't run to catch the Metro train, and I don't scramble to put my data into some sort of coherent form when I have to give a lab meeting presentation on short notice.

So I'm not scrambling for my lab meeting talk tomorrow. My plan is, in the absence of any solid results to present, to go visionary, saying whatever I want to, without having to back it up with supporting data. And in the spirit of scientific openness, I'm providing a sneak preview of what may tomorrow turn out to be a terrific mess of a lab meeting talk.

Why should you care about what goes on in our lab meetings? Because we work on some of the most interesting problems in science today, that's why. Here's the topic for tomorrow's lab meeting: What makes us different? Why are individuals of the same species different from each other? And how can we explain those differences with physical chemistry?

How our genes make us different is, of course, what many scientists are interested in. You can't open an issue of Nature Genetics without finding at least a half-dozen genome-wide association studies, aimed at finding the genetic differences responsible for differences in traits like height, weight, or susceptibility to diseases like stroke, lymphoma, diabetes, or atrial fibrillation.

These studies fall solidly within the realm of genetics, and ultimately what you get out of genetics is a quantitative relationship between a particular genetic variant and a certain trait. How that variant produces its effect on that trait is unknown. To put this in the right jargon, we don't know how a given genotype produces a phenotype.

Personally, I find that unsatisfying. I work in a genetics department, but really, at heart and by training, I'm a biochemist. I like to think in terms of molecules. My goal is to explain biology in terms of physical chemistry. Biophysical chemistry is the black box between genotype and phenotype.

But here we run into problem: biochemists don't think like geneticists, especially population geneticists. Biochemists are implicitly trained to think of biochemical systems as platonic ideals - when we think about something like Ras signaling in mouse cells, we think of it as being the same in all cells, except when tumorigenic mutations make it go wrong. In other words, the only time we think about mutations that cause a signaling pathway to operate differently is when we're thinking about disease.

Yet it's obvious that perfectly healthy individuals differ from each other genetically. You and I can have millions of sequence differences in our DNA, and be just fine. Biochemists (and molecular biologists, and cell biologists, etc.) are terrible at thinking about variation. This is one of those topics that puts the differences in outlook between biological sub-disciplines in stark relief - population geneticists think of nothing but variation. And in fact, without variation, population geneticists would have nothing to work with. Variation is their stock-in-trade.

There is a reason that biochemists have avoided genetic variation. If I want to understand how a particular system works, then I work it out in the most general way possible. Researchers studying a signaling pathway are interested in how a signal gets relayed from a cell-surface receptor, through various intermediate proteins, down to the ultimate targets of the pathway. They are interested in the broad features of this pathway that hold true for all individuals. They want to know which proteins and small molecules are involved in carrying the signal. And for decades, biochemists have been teasing apart the workings of these pathways, with great success. Worrying about differences in pathway function among individuals would have been more distracting than helpful in this process.

Bringing Genetics and Biochemistry Together

After years of work, we now know a great deal about many biochemical systems. In fact, for some systems the details have been so well worked out, that scientists have put together mathematical models of how these systems work at the level of physical chemistry (meaning here interactions among molecules). With these models, you can run simulations of the system, and see what happens when you perturb it a certain way, and therefore make predictions about what happens when you make mutations in the proteins of the system.

Once you reach this point - where you have a detailed understanding of a particular system, with a working quantitative model - what types of questions should you ask next? If we've already figured out a particular biochemical pathway at this level of detail, what else do you want to know? This is a key question to consider, because at some point, you hit a level of diminishing returns; you learn more details about the system, but those details don't tell you anything important.

This is where we can bring biochemistry (or systems biology, or whatever) and genetics together. We can take our well-characterized systems, ones that we understand at the level of physical chemistry, and ask how the dynamics of those systems vary among individuals.

So our question then is this: where does genetic variation tend to fall? Does it occur at highly sensitive points of the pathway, or will we see that genetic variation tends to modify those parameters which have only a small impact on the dynamics of the system? Instead of focusing on all aspects of a system, by taking this approach we focus on only those aspects that differ among individuals. Until recently, it has been impossible to answer this question, because we haven't had the DNA sequencing power and the biophysical models needed to address this.

Framing this question in terms of parameters may not seem that exciting to some of you, but the answer to this question will help us understand other key genotype-phenotype questions. One of them is this: Which features of a biochemical system are the functionally important ones? Response time? Activation threshold? Robustness? Biochemical pathways are dynamical systems that have all sorts of interesting behaviors, but many of those behaviors can be simply artifacts of the way the system is rigged up, without any important functional role.

Here's an example from a simulation of a genetic regulatory network in yeast. The graph shows the pulsed expression of a particular gene over time, in response to a signal acting on the regulatory network controlling this gene. As you can see, as I change the parameters in the model, I get different behaviors in the pulse of gene expression. But what is important? The amplitude of the pulse? The timing of peak expression? The breadth of the peak? I don't know. 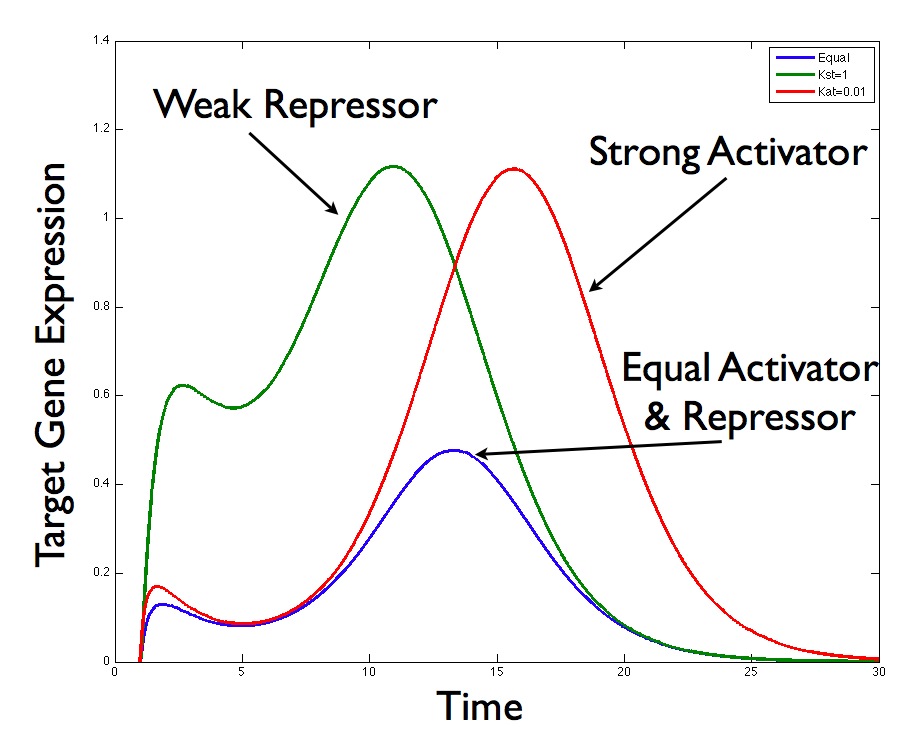 By looking at what genetic variation does to a biochemical system, we can see which features of a system can change without catastrophic consequences. For example, let's say that we have a mathematical model of a signaling pathway, one where a drug or hormone binds to a receptor at the cell surface and initiates a cascade of reactions that ultimately lead to changes in gene expression. Our model shows us that this pathway has a precisely-tuned threshold for activation, and that the pathway is structured in such a way to produce a very rapid response time if the parameters are just right.

So, looking at both physical chemistry and genetic variation allows to to learn several things about the relationship between genotype and phenotype: we can understand the effects of genetic variants on the physical behavior of a biochemical system (by modeling those genetic variants as perturbations in the paramters of the model), and we can learn which features of a system have been allowed to change, and which have been kept constant in a population, as a result of by evolutionary pressure.

Right now, we can make some guesses about what to expect about where genetic variation should fall in biochemical systems, but we don't really know the answer, because the studies haven't been done. We really don't know why, at a physical chemistry level, individuals are different from one another. We also don't understand very well how biochemical systems evolve. Different yeast species spend different amounts of time going through the cell division cycle, but what types of changes in the cell division control system had to occur in order to produce the differences in timing among different species? There are thousands of questions like this that scientists have been unable to address until recenty.

'Interdisciplinary science' is a hot buzz-term that will increase your chances of funding success with an NIH study section, but we really are at the point now where taking an interdisciplinary approach creates some unprecedented opportunities to answer some of the most important open questions in biology. Biochemists and geneticists have borrowed each other's experimental tools for years, but now it's time for them to fuse their different intellectual outlooks. Together they can tell us why we differ from one another, and how our genes affect who we are.