Oil has been the strategic asset since it was discovered.  The price of oil reflects everything from the underlying value of the US dollar, to the general level of industrial economic activity and development at any given time in aggregate for the world. Prices are moved by events such as economic releases, and political events.  Demand for oil arises not just from Gasoline and other fuel oils such as deisel.  Demand for oils also arises from power plants, and chemical industries, with petroleum being one of the hydrocarbon inputs for many chemical prices.  Oil is used in almost everything that we use in our daily lives, from the houses that surround us, to the electricity we consume.  Thus, it feeds into every aspect of the economy, and likewise is affected from a complexity of source.  Its price movement has great revealing potential.

The markets provide a running commentary of geopolitical events, collapsing an infinity of factors into a single variable which can only move in 2 directions.  The phrase, money speaks, is never truer than when watching the stock market.  Many argue that the events of 9/11 were forecasted by irregular market activity.  It would not be a surprise if sophisticated financial operatives were able to profit billions of dollars from foreknowledge of the attacks.  This is an incentive so lucrative and enticing that even the most disciplined terrorist or intelligence networks cannot help but attempt to take a position for profit.  In fact, prior to the assasination of Benezir Bhutto, the former Prime Minister of Pakistan,  there had been major irregularities in after-market trading, with volume spikes in all the major index etfs, as well as many major largecaps stocks.  The extent of certainty for a coming market decline was so high that unknown individuals were willing to pay millions of dollars in losses simply to exit their position.  The photos below were taken just a few days prior to the assasination, and had been distributed with a warning of the possibility of such an event. 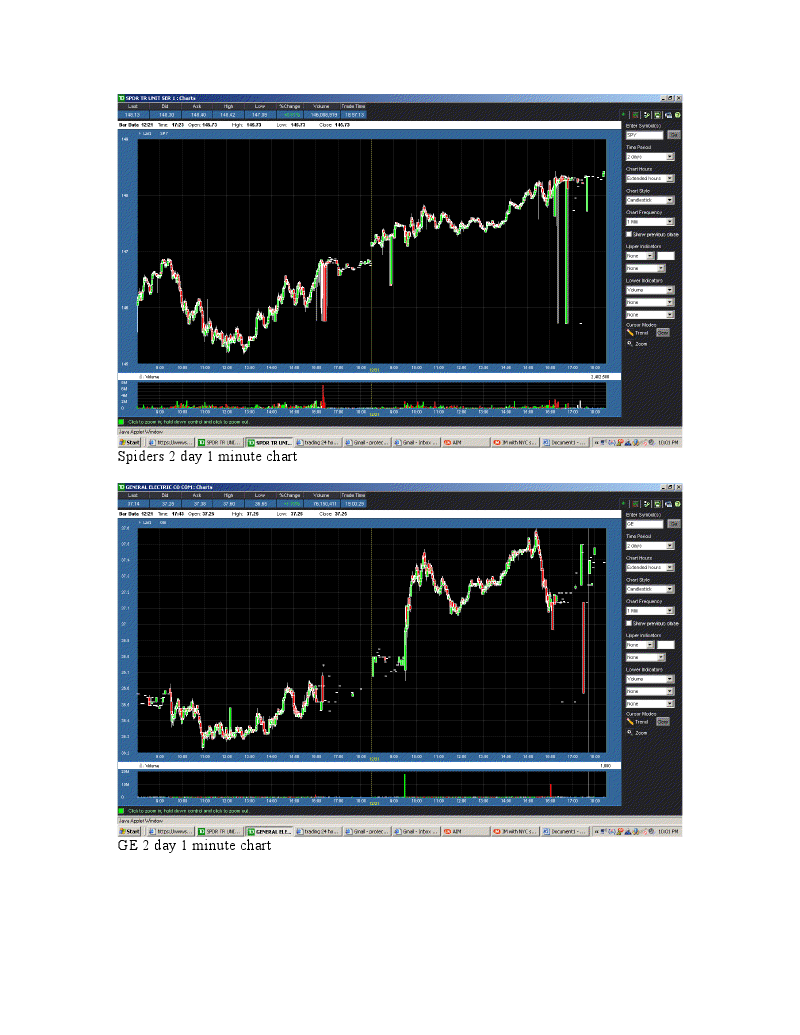 The recent major decline in oil prices on the heels of good economic news, sparked by the killing of Osama Bin Laden, reveals much about the sentiments of those in the know.  The fact that the market has wiped out most of the last quarter's gains in oil, and has declined the most since the financial crisis of 2008 belies knowledge that oil prices in the near term will likely continue to decline.  If this speculation is true, it also reveals that those with real intelligence and information on the ground believe that the Major oil producers are going to be in a more secure position to provide the world with energy supplies than in the past.  This means that traders are betting that Libya will neither destabilize the region, nor turn out to be a major quagmire, that Iraq will continue to build upon its stability, and that the changes in the middle east in general are progressing in a direction which is favorable to lower oil prices.  In fact, these outcomes are probably already pretty near.

While it may be true that the recent rout in oil prices may be simply an emotional reaction, history argues that what constituted a small crash in oil prices reveals real information regarding the outcome of the conflicts currently occuring in the middle east.  The last few days oil began to crumble, and today, what might almost constitute a crash occured, with oil futures losing more than 10%.  In the total 3 days since Osama was pronounced dead, the price of wti crude futures went from a high of around 114 a barrel to a low of 98.25.  That would constitute a crash in the stock market, and if tomorrow turns out to be a rout, then it is crash and burn for oil. Time will tell!


The elasticity of oil is estimated to be approximately 1%.  If the price of oil does collapse, then the US will find itself in a healthy position, but its green technologies again hobbled.  A sustained drop for a reasonable price of oil at 60-80 dollars a barrel from last weeks prices of 110 a barrel would mean approximately a 3 to 4 percent increase in growth, which is double the current growth in GDP, rates unseen in the US, on top of already increasing trends.  It would make sense, since the US consumer has been hobbled with high fuel costs and unable to spend.  With significant amounts of fuel imported, this means a drain upon the capital, or productive wealth, of a country.

This drop in fuel costs will allow people once again to go out more often, providng a further stimulus to the economy.  However, it will be hoped that people use their extra money towards improving their own productive capacity through means such as eduction or just a suit for an interview.  If Oil crashes, which it should, since almost anyone with a billion dollars can start making it at 40 dollars a barrel, commodities such as gold will follow suit and further private stimulus will flow back into the economy.  Whatever the boom will be.  Money will be easy.