Sean Gibbons
I'm back, after an extended hiatus due to my big move to Chicago to begin grad school.  I’ve been pummeled by work for the past month, so I’ll keep this one short and sweet.

The future is here! We can manipulate the nervous systems of living beings with focused beams of electromagnetic energy.  This new trick has been termed optogenetics: the optical manipulation of genetically altered cells.  The journal Nature Methods chose optogenetics as their 2010 method of the year because previous techniques for exploring the nervous system, like the application of drugs or electrical shocks, are much less spatiotemporally precise than a light pulse.  This novel method allows researchers to perturb individual neurons on millisecond timescales with micrometer-level precision and may help decode the mysteries of learning, memory, sleep, and other complex neurological phenomena.
The way it works hinges, as usual, upon our friends, the microbes.  A class of membrane-spanning ion channels and pumps called opsins are responsible for the light-induced activation/repression of neuronal activity. Channelrhodopsins (ChR) -  light-activated ion channels - are used to depolarize (activate) neurons, while halorhodopsins can be employed to hyperpolarize (inhibit) neuronal firing by pumping anions into the cell using light energy.  These microbial proteins are inserted into particular invertebrate (nematode and fruit fly) and vertebrate (mouse) neurons or muscle cells via genetic engineering.

Recently, in NatureMethods, Stirman et al. (2011) designed a clever optical set-up, using custom modifications to a commercially available Hitachi 3-LCD projector (see below) to perturb microscopic light-sensitive samples with a high degree of precision.  Using the software program LabView, they programed the microscope stage and the projector to track a moving nematode while shining light on a defined patch of the worm’s surface.  This tool is two orders of magnitude cheaper than current conventional systems, which are available forthis same type of work.  This levels the playing field for labs with limited resources by allowing them access to this cutting-edge methodology. 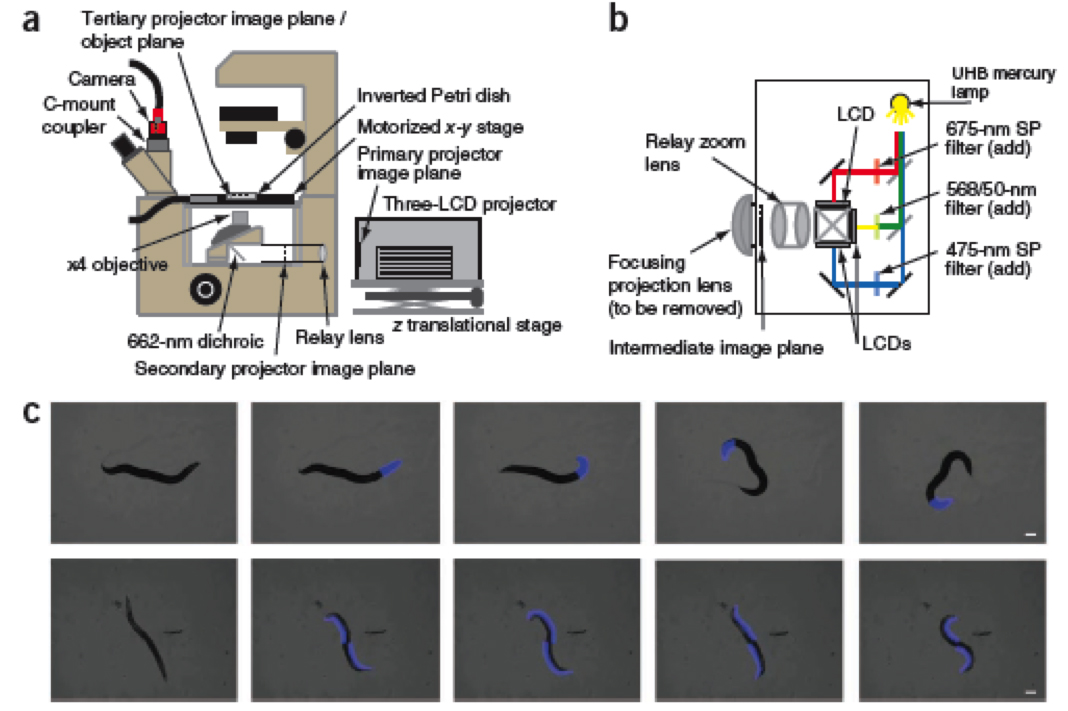 Figure 1 (a,b and c) from Stirman et al., 2011.  Pannels a an b show the optical set up for the microscope and the projector.  Pannel c shows different illumination schemes that were developed for manipulating light-sensitive nematodes.

My biophysical colleagues and I are attempting to build ourown custom version of the optical set-up in Stirman et al. (2011) and engineer new strains of optogenetically sensitive mutant worms.  While this is part of a required lab course, we plan to run new experiments that can be turned (fingers crossed) into a publication.  Really, we just want to make worms dance.  Our ultimate success would be to choreograph a music video of “Bad Romance” by Lady Gaga, using an all-nematodecast.  Stay tuned, science fans.