“Hand claps are a relatively primitive conveyor of sonic information, yet they are widely applied for different purposes.”

Primitive though they may be, given just a simple audio recording of a single handclap, is it possible to determine the hand-configuration of the clapper via a computer-assisted digital analysis of the sound?

Researchers Antti Jylhä and Cumhur Erkut at the Laboratory of Acoustics and Audio Signal Processing, Helsinki University of Technology, TKK, Espoo, Finland reveal that, yes, it is. 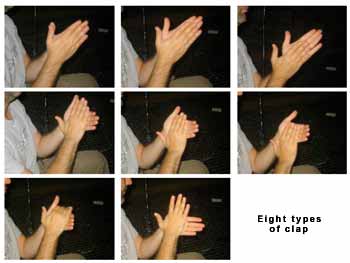 Using a combination of FFT filtering and the Steiglitz-McBride algorithm on 40 recordings of claps (two clappers, 20 claps each), the team have discovered eight distinct classes of clap. Named as: P1, P2, P3, A1, A2, A3, A1+ and A1-  The results showing too that “… it is possible to make inference of the hand configuration of a clapper given the resulting sound.“

The paper also points to the possibility of more-advanced clap analysis techniques that may be of interest to security researchers – but which could perhaps be of concern to privacy-rights groups. Clapper Recognition. In the future, might it be possible to electronically identify the clap-signature of a particular individual embedded within a crowd of clappers? “The results also suggest that the claps of individual clappers may incorporate systematic differences from other people’s claps …” say the research team.

SOFTWARE: The Helsinki University of Technology Laboratory of Acoustics and Audio Signal Processing has created a software package called ClaPD – one of the very few, perhaps the only, cross-platform freeware fake-applause generation software.

A video describing the software can be viewed (and heard) here (.wmv format). And ClaPD can be downloaded here: (Windows, Linux and OSX 10.5)