Martin Gardiner
A team from the School of Family and Consumer Sciences at Eastern Illinois University have discovered a reliable method of persuading people to eat up to 50% less pistachio nuts – just leave them in their shells. Their paper on the subject : In-shell pistachio nuts reduce caloric intake compared to shelled nuts (published in the October 2011 issue of the journal Appetite) not only confirms the hypothesis that 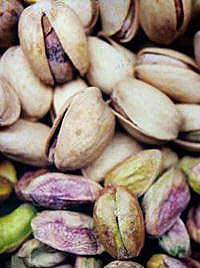 “…consuming in-shell pistachios, compared to shelled pistachios, causes individuals to consume less.” But also offers a highly plausible explanation for the effect : “The difference in calories consumed may be due to the additional time needed to shell the nuts or the extra volume perceived when consuming in-shell nuts.”
Based around the findings, one of the paper’s authors, Professor James Painter, has developed the so-called ‘Pistachio Principle’ – which he outlines here in this video