Alerted by an announcement in several British newspapers, for example Honeysuckle tea could fight flu, Boiling honeysuckle releases molecule which can help fight influenza virus, study suggests, I started digging deeper.  Although it has not yet appeared in the literature, I did find the following EurekaAlert:

“In a new study, Chen-Yu Zhang’s group at Nanjing University present an extremely novel finding that a plant microRNA, MIR2911, which is enriched in honeysuckle, directly targets influenza A viruses (IAV) including H1N1, H5N1 and H7N9. Drinking of honeysuckle soup can prevent IAV infection and reduce H5N1-induced mice death.”

Now a micro-RNA would be one that contains 19-24 nucleotides and that does not encode for proteins.

“MIR2911 was found to be selectively retained in the boiled decoction of honeysuckle, and to be delivered into mouse plasma and lung tissue after drinking honeysuckle decoction.”

They found also that the micro-RNA was also multiplied in the mouse tissues such as lungs and liver, implying that “exogenous small RNA via the route of food-intake can be delivered into host tissues with sufficient functional concentration.”

It seems remarkable to me (although maybe I am, in a metaphorical sense, living ‘out in the sticks’) that bare RNA can even get through the digestive system into the body.  And what, I wonder, is the mechanism by which the mouse multiplies this foreign RNA?

And could this be the start of something much bigger, a new class of medicines, even?

Anyway, here is the honeysuckle species in question, Lonicera japonica, growing close to my home: since it was introduced, it has become a very common species in British gardens.  One can see how it gets its colloquial Chinese name, the “gold and silver flower”. 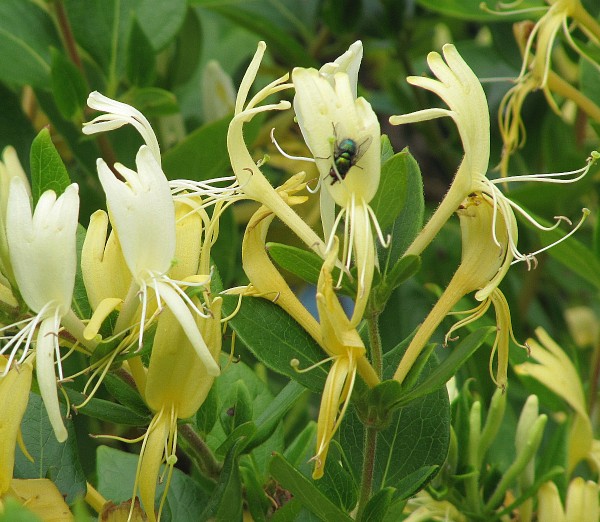 It is now the time of year when elderly folks like myself are advised to get a ’flu jab — but should I also start drinking honeysuckle tea?

And here is a stone lion sculpture at the tomb of Xiao Xiu, dating from AD 518: sculptures such as these are a feature of Nanjing, where this research comes from.