Recently on Science Codex there appeared A new fossil species found in Spain, which on reading turns out to be a new Cloudinid, an order of shelled creatures from the late Ediacaran.  Cloudina shells are of interest, showing bore holes made by predators, pointing to an evolutionary arms race which may have driven the great diversification of phyla in the early Cambrian.

The paper itself, in Precambrian Research, is entitled A new species of Cloudina from the terminal Ediacaran of Spain.  What I find interesting is the figure showing a central canal (presumably a gut) running through the creature. 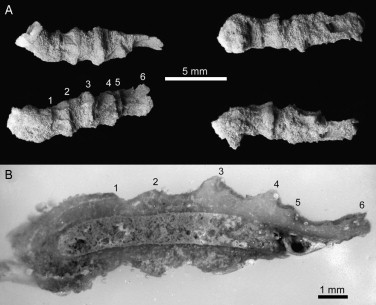 The presence of a gut points to what is to me is one of the most intriguing mysteries of the time, namely how and when did the differentiation between deuterostomes and protostomes arise?  Protostomes are by far the more numerous, both in abundance of species and of individuals.  Two major subgroups of the protostomes are the Lophotrochozoa whose most spectacular members are the worms and molluscs, and the Ecdysozoa containing the arthropods.  Deuterostomes are less numerous, and include starfish and ourselves.  The two groups are distinguished by their embryonic development. I first became aware of the distinction through reading Animals Without Backbones by Ralph Buchsbaum.  That was a Pelican (‘posh’ Penguin) book in two volumes from 1959.  It was really a lovely book, but alas I think the science has moved on so much, especially in regard to classification, that I could hardly recommend it now as a first textbook.  But they did give me a basis for appreciating invertebrates, including their embryological development.

I doubt if these particular fossils will shed much light on the mystery, but I am intrigued nonetheless.