Robert H Olley
On the 12th July 2010, I was watching Rich Hall's 'The Dirty South'.  The programme trailer says:

Rich Hall sets his keen eye and acerbic wit on his homeland once again as he sifts truth from fiction in Hollywood's version of the southern states of the USA. Using specially shot interviews and featuring archive footage from classic movies such as Gone With The Wind, A Streetcar Named Desire and Deliverance, Rich discovers a South that is about so much more than just rednecks, racism and hillbillies.

Now what would be interesting to us scientists is his take on the film "Inherit the Wind".  Now I read, a few years ago, a scholarly article on the Scopes Trial (which being on paper, I have in my typical manner misplaced.)  Three arguments from the paper strongly remained in my mind though.

(1) Clarence Darrow more or less wrested the case from the ACLU and turned it into another episode of "The Darrow Road Show".  OK, that bit is my own figurative language.
(2) William Jennings Bryan was, in social policy, a “progressive” figure;
(3) The film was a Hollywood whinge against the McCarthy era.

Rich Hall’s three main points were:
(1) This was yet another Hollywood portrayal of the South as hicks and hillbillies;
(2) William Jennings Bryan was fighting against the ideas of eugenics which often, at that time, accompanied the teaching of evolution;
(3) The film was a Hollywood whinge against the McCarthy era.

In my opinion, of all groups who complain against McCarthyism, the Hollywood set are the least deserving and justifiable.  I read in an obituary of Ronald Reagan that he chose to enter politics because of the infestation of the Hollywood actors’ union by Communists.

Rich Hall was born in Alexandria, Virginia and grew up in Mecklenburg County, North
Carolina.  As the picture below shows, in Britain the programme is watchable (for a short while) on BBC iPlayer. 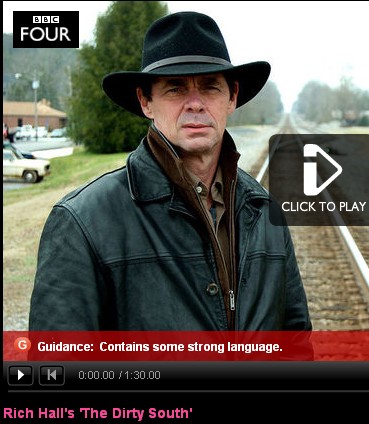