When I was a lad, I was fascinated by plant classification, enjoying the beds in our school botanic garden laid out according to different plant families.  Flowering plants (angiosperms) appeared to be neatly divided into two groups, monocots and dicots, based on whether their newly germinated seedling had one or two ‘seed leaves’ or cotyledons.  But these days, we have additional information from molecular phylogenetics which has led to the APG III system (Angiosperm Phylogeny Group III system) of flowering plant classification, which is the third version of a modern, mostly molecular-based, system of plant taxonomy.

Tucked among the dicots were some rather ‘odd’ families, which in some ways appeared to resemble monocots, especially with their flowers having three, rather than four or five petals, etc.  But now we see that the ‘classical’ dicots actually covered a multiplicity of groups, some of which are less closely related than are the monocots and more ‘typical’ eudicots.  Most of these families are now included in a group with the Magnolias, which were formerly regarded as ‘primitive’ and close to the group from which all dicots were thought to be descended.  This group is called the magnoliids (which the powers-that-be say must not be spelt with a capital ‘M’). 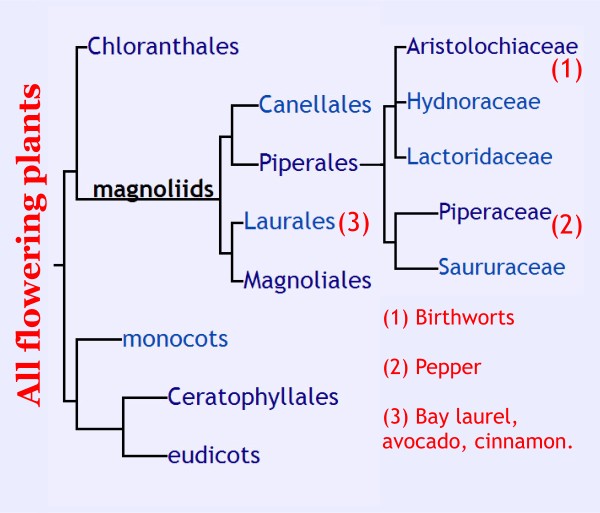 
One of these ‘odd’ families was the Aristolochiaceae, which includes Aristolochia clematitis, the European birthwort, so called because of its use in herbal medicine.  Because the flowers were supposed to resemble a womb, herbalists thought, according to the Doctrine of Signatures, that it would be helpful to women giving birth.  However,
it is now known to be the cause of thousands of kidney failures in Romania, Bulgaria, Serbia, Bosnia and Herzegovina and Croatia where the plant is unintentionally consumed through contaminated flour.
This came to light, starting with observations by family doctors in Bulgaria, shortly after the end of WW2.  More recently, effects of the use of other Aristolochia species in Traditional Chinese Medicine were observed in the West, and in Taiwan, use of extracts from plants in the Aristolochia genus was outlawed in 2003.


The chemical villain of the piece turns out to be Aristolochic acid (more strictly, a group of related compounds)


With modern DNA techniques, some of the damage mechanism is starting to come to light.  For example, a paper ‘Aristolochic acid and the etiology of endemic (Balkan) nephropathy’ published in PNAS in 2007, showed that sufferers have alterations to their DNA that can be shown to be uniquely the result of poisoning by aristolochic acid.

This requires taking tissue samples from (presumably still living) patients.  But for epidemiological studies, it would be convenient if there is a way to get DNA adducts out of preserved tissue samples, which are much more abundant than fresh or frozen.

Now the American Chemical Society has put out a (thankfully free) article:

Robert J. Turesky and colleagues at the Wadsworth Center at the New York State Department of Public Health found that a commercial DNA purification kit reverses changes in preserved specimens that previously locked up the DNA.  Following this treatment, high-pressure liquid chromatography and mass spectrometry detected similar amounts of adducted DNA to those found in fresh samples.

They now plan to look for DNA adducts associated with smoking, cooked meats, and air pollution.

Much of the material, apart from the recent paper, is taken from a write-up on the Poison Garden Website which explains the history in great detail, and is well worth a read.