In 2001 there was a massive outbreak of Foot-and-Mouth Disease (FMD) in the United Kingdom.  This caused, in terms of prices at that time £8bn / $13–16bn of loss to the UK economy, and much distress in agricultural communities.

One of the most memorable things of that time was images of cattle and other carcasses being burned.

There was much argument at the time whether the outbreak should be contained by culling or vaccination.  Foot-and-mouth vaccination has a number of problems.  ‘Dead’ vaccines have the property of sometimes ‘coming to life again’ through incomplete inactivation.  One approach has been to develop genetically modified vaccines incapable of such reversion.  Now a possibility of developing a vaccine without any genetic material, and so unable to reproduce, is on the radar.

I was thus excited to see on TV local news an item about this, especially since it mentioned the University of Reading and the nearby Diamond synchrotron.  Getting access to the published work, I have attempted to make this digest of the work, which not only involves the School of Biological Sciences at Reading but also the Pirbright Institute for Animal Health in Woking, Surrey, the Division of Structural Biology at Oxford, and the Department of Biological Chemistry at the John Innes Centre in Norwich.

A ‘typical virus’ might look as follows: this is a representation of a Cytomegalovirus, note the capsid, the box surrounding the genetic material which is DNA.  The foot-and-mouth disease virus is much smaller than this: it is a picornavirus, which name unpacked means small (pico) RNA virus.  These viruses are among the smallest of all viruses, and consist of a single strand of RNA, the genetic material, surrounded by an icosahedral capsid, and nothing else. 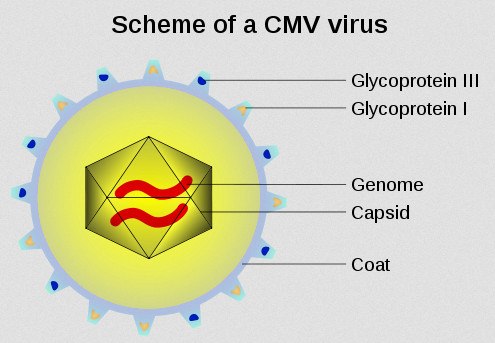 The work described here uses genetic engineering to produce foot-and-mouth capsids free of genetic material, and then inject these into host animals which will produce antibodies.

Genetic engineering uses Recombinant DNA, where DNA sequences from different organisms are tacked together to produce an artificial genome.  Commonly used for this are plasmids, small DNA molecules that are physically separate from, and can replicate independently of, chromosomal DNA within a cell.  Here is a wiki-available diagram of a commercially available system — not the one used for this work, but one which will illustrate the principle:

The main part of this vector (used to carry the desired genetic material into the target organisms) is an artificially developed ring of DNA, probably a plasmid, but there is one part tailorable by the user, called the expression cassette.  The user puts bits of the desired genes into this, in the hope that this will cause the target cells to express the desired protein, which may be an antibody or a enzyme for synthesis of a built-in-pesticide. In the case of the new FMDV vaccine the genes concerned produce the structural proteins of the virus particle but not the enzymes required for replication. As a result the particles produced are non-infectious and cannot initiate disease.

In the present work, genetic material for FMD capsids is introduced into both the Vaccinia virus and the insect baculovirus.  Vaccinia is part of a trio of viruses, the Cowpox virus, used by Edward Jenner to give immunity to the deadly smallpox virus, the third member of the trio.  Jenner’s work was satirized by the cartoonist James Gillray.

The effects of baculoviruses can be found in literature from as early as the sixteenth century in reports of “wilting disease” infecting silk-producing larva.  Starting in the 1940s they were used and studied widely as biopesticides in crop fields.


The recombinant Vaccinia viruses were then incubated with various commercially available cell lines such as Rabbit Kidney Epithelial Cells (the RK13 Line) to prove they were capable of producing safe FMDV empty particles. In a second phase the recombinant baculovirus is used with cells from insects, the Fall Armyworm and two lines from the Cabbage Looper.  These insect expression systems are much more scalable than mammalian cell culture and so are suitable for manufacture.  Lo and behold, FMD capsids, free of genetic material, were expressed! 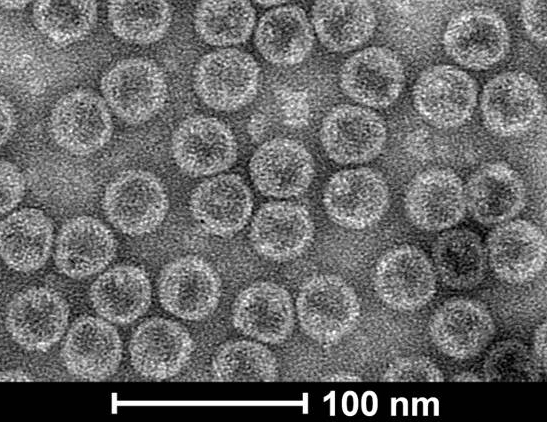 One further bit of genetic engineering was done.  In order to increase the stability of the capsids, one histidine in the wild type protein was replaced by cysteine, allowing the formation of disulfide links to hold everything together (see the electron density maps obtained at the Diamond Synchrotron).  One potential downside was that the mutant form might not be as effective for antibody production but this will be checked in future experiments.

It seems, though that both the wild and mutant types are stable enough, and both give immunity to cattle lasting for the 34 weeks of trial time.

This work is published in the following two papers:

At the time of the 2001 General Election, not only was the outbreak at its height, but electioneering politicians were coming out with gaffes, stupid statements which one did think might seriously affect their electability.  The calypso singer Alexander D Great came out with this gem:

East and West, North and South,
See dem put dere foot in de mouth
We should wait for a lull
Take advantage and cull
All de politiciân!

The science behind the new foot-and-mouth disease vaccine