Skegness is SO bracing

said the posters featuring the Jolly Fisherman.  But what is it that makes the seaside air so invigorating?  Not ozone, as your auntie or granny might have told you, adding that it was “good for you”.  A whiff of ozone down the Tube, where it used to be added to kill airborne germs, or more recently standing by a photocopier, should soon disabuse anyone of that misapprehension.  And ozone, at ground level anyway, is certainly not good for you.

No, the “smell of the sea” is due to dimethyl sulfide (DMS). 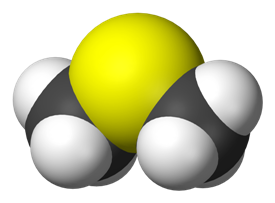 But hold on!  Isn’t DMS a flammable liquid that boils at 37°C with a characteristic disagreeable odour?  Probably this  depends on concentration.  As I first learned over 40 years ago from my Noller’s Organic Chemistry (2nd Edition), indole occurs naturally in human faeces and has an intense faecal odour.  At very low concentrations, however, it has a flowery smell, and is a constituent of many flower scents (such as orange blossoms) and perfumes, as does its methyl derivative skatole, which is produced fromtryptophan in the mammalian digestive tract.

But where does this gas come from?  Seaweed, perhaps?

This is where the BBC Coast series comes in.  In the episode Swanage to Lands End we find Dr Alice Roberts interviewing Professor Andrew Johnston of the University of East Anglia.  They get hold of some seaweed – sniff, sniff, no that’s not it.  Now grind up the seaweed to make a green soupy liquid, and add some bacteria from a culture in a Petri dish.  These bacteria have travelled all the way from East Anglia, being originally found in the sea off Stiffkey on the North Norfolk coast.  Let them feast for two hours, and unscrew the cap and voilà – concentrated eau de la Riviera!

The bacteria have been feasting on Dimethylsulfoniopropionate (DMSP) which is found in marine phytoplankton and seaweeds.  This compound’s main function is keeping up the osmotic pressure of the cells in salty water, and protecting them from attack by viruses or grazing animals.

Once the bacteria have been at it, though, vast quantities of DMS are released into the atmosphere, and become part of the global sulphur cycle as in this grossly simplified re-draw from reference [2]. 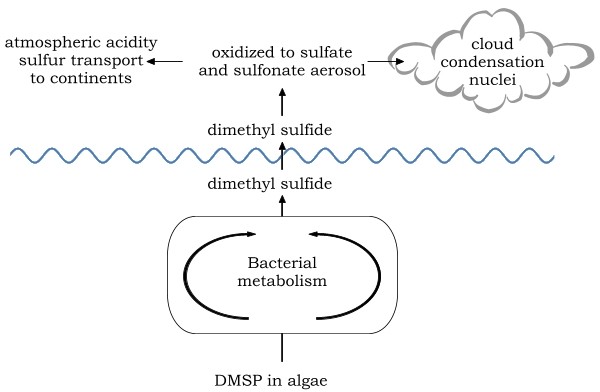 By acting as a source of cloud condensation nuclei, DMS most likely has a significant effect on the Earth’s climate.  In the present situation, would more or less DMS be deleterious or ‘damgudthyng’?

[1] Press release from the University of East Anglia