Back around 1960, at school I enjoyed a laboratory lecture on liquid nitrogen, watching a deep frozen squash ball being shattered at a temperature well below that at which it turns from a rubber into a glass, and then seeing a nail being driven into a block of wood with a hammer whose head was made of frozen mercury.  The repeated impacts left an impression of the nail head in the soft metal.

Reaching such low temperatures, though, was a technological race stretching over a century of more.  By 1845, Michael Faraday had managed to liquefy most gases then known to exist.  Six gases, however, resisted every attempt at liquefaction and were known at the time as “permanent gases”.  These were oxygen, hydrogen, nitrogen, carbon monoxide, methane, and nitric oxide.

In 1877, Louis Paul Cailletet in France and Raoul Pictet in Switzerland succeeded in producing the first droplets of liquid air: dry air is a mixture largely composed of 21% oxygen (b.p.90K) and 78% nitrogen (b.p.77K).  Two Polish physicists, Zygmunt Wróblewski and Karol Olszewski, liquefied oxygen and nitrogen in 1883, leaving only hydrogen as the one then known “permanent” gas yet to be liquefied.  Two scientists on opposite sides of the North Sea found themselves in a race to achieve this.  The winner, in 1898, was the Scot Sir James Dewar, successor to Faraday at the Royal Institution who for this task invented the double-walled vacuum flask, known in laboratories as a Dewar and in the world outside as a thermos flask.  Under atmospheric pressure, hydrogen boils at 20 Kelvins (the average equilibrium temperature of Pluto is 44 K).

At that time, the existence of helium had only been known since 1868 from observations of the spectrum (hence the name, from the Greek helios = “sun”).  In 1882, Luigi Palmieri detected in on Earth though the spectra of gases emitted from Mount Vesuvius.  Three years later, in 1895, another Scot, Sir William Ramsay, who also discovered the noble gases from argon through to xenon, isolated terrestrial helium.

Across the North Sea, in the Netherlands, Kamerlingh Onnes liquefied helium in 1908, which boils at 4.2 K, and in 1911 he found that the resistance in a solid mercury wire immersed in liquid helium at that temperature suddenly vanished.  He immediately realized the significance of the discovery reporting that “Mercury has passed into a new state, which on account of its extraordinary electrical properties may be called the superconductive state”.

In 1957, John Bardeen, Leon N. Cooper, and J. Robert Schrieffer developed their theory, widely known as the BCS theory, which is still the satdard theory for most superconductors today.  This is a quantum theory with macroscopic manifestations, and involves the interaction of electrons with phonons.  It is well written up in BCS Theory of Superconductivity - HyperPhysics (Georgia State University).  Phonons, not to be confused with photons (what would Star Trek make of a phonon torpedo?), are collective excitations in a periodic, elastic arrangement of atoms or molecules in condensed matter, like solids and some liquids.  Often designated as quasiparticles, they represent excited states in the quantum mechanical quantization of the modes of vibrations of elastic structures of interacting particles, and Phonons play a major role in many of the physical properties of condensed matter, like thermal conductivity and electrical conductivity.  The concept of phonons was introduced in 1932 by Soviet physicist Igor Tamm.  The name phonon comes from the Greek word φωνή (phonē), which translates to sound or voice because long-wavelength phonons give rise to sound.  Shorter-wavelength higher-frequency phonons give rise to heat. 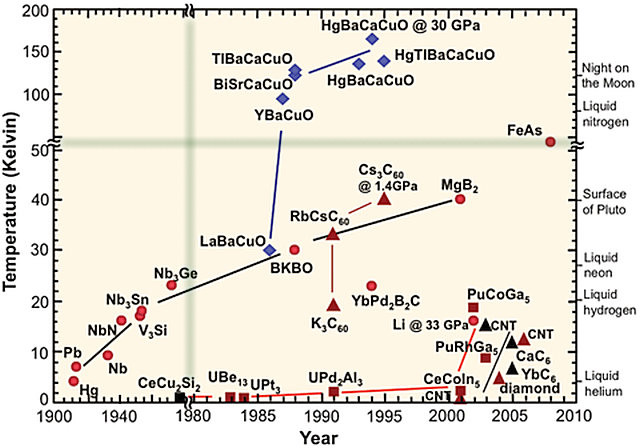 
Now, this has been achieved with hydrogen sulfide, known as the gas that gives the smell to rotten eggs and the name “stinks” to chemistry, at least when I was at school.  In their paper

a group of authors at the Max-Planck-Institut für Chemie and the Johannes Gutenberg-Universität, both in Mainz, Germany report how they have taken this material to a pressure of 1.5 million times atmospheric pressure with a Diamond anvil cell: this is getting on for half the pressure at the Earth’s centre.  The superconducting temperature achieved is about 8 kelvins above the sublimation point of dry ice.  It may not be H2S itself, but a decomposition product H3S formed, along with some sulfur, at this high pressure.

The two next targets are room temperature superconductivity and materials that do not require high pressure.  As one of the lead authors says in this press release:

“Our research into hydrogen sulfide has however shown that many hydrogen-rich materials can have a high transition temperature,” says Eremets.  It may even be possible to realize a high-temperature superconductor worth the name in terms of common temperature perception without high pressure.  The researchers in Mainz currently need the high pressure to convert materials that act electrically insulating like hydrogen sulfide into metals.  “There may be polymers or other hydrogen-rich compounds that can be converted to metals in some other way and become superconductive at room temperature,” says the physicist.  If such materials can be found, we would finally have them: superconductors that can be used for a wide range of technical applications.