Oliver Knevitt
Popular science writing today can be hit and miss. It can be truly awful; such as Brian Greene’s immensely dull Elegant Universe, Stephen Jay Gould’s idiosyncratically waffley Rocks of Ages, and Nassim Nicholas Taleb's misguided and rushed Black Swan (in my humble opinion). But it can be utterly sublime, such as Richard Dawkins’ The Ancestors Tale (his magum opus, in my opinion), Stephen Hawking’s A Brief History of time, and Carl Sagan’s The Cosmic Connection.

Good popular science books like these are engaging, unpretentious, and inspirational, but most  of all, clever, witty, and humorous. You could argue with me on this one, but simply saying that the science will speak for itself is not good enough. I could just as well go read a nice thick textbook.

Well, science writing does not get much better than Conversations on the Plurality of Worlds, written by the loquacious French courtier Bernard le Bovier de Fontenelle. I saw a couple of quotes from it in an astrobiology paper, got reading it, and was hooked - it's now become one of my favourite books. So I thought I'd share it with you.

Conversations is, perhaps, the most unique popular science book in history. Unlike Newton, whose Principia was a complex treatise published in Latin and aimed at his fellow natural philosophers, Fontenelle wrote in vernacular French and aimed at as broad an audience as possible. He tells us straight-off in the preface, 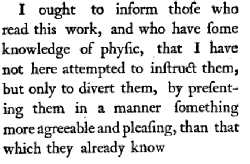 The premise is as follows. A philosopher (read scientist here, by the way) is staying at a country chateau. There he meets the Marchinoness, a beautiful young aristocratic woman, with a precocious and vivacious intelligence, who is curious about the natural world. Every evening for six nights, she and the philosopher engage in a lively (and often very flirtatious) conversation about the natural world.

Published in 1686, a year before Principia, Fontenelle’s 100 page book is a masterpiece. There had been nothing like it then, and there’s been nothing like it since. What marks it out is that it's more of a dramatic play than a book. Each chapter is like an act of a play, opening with lucid descriptions of the evening ambience. Then, the glamourous hostess enters and the discussion begin.

The book was a runaway success, subsequently going through hundreds of editions in many different languages. Unlike the musty and controversial science known only to the elite, here was a book that everybody could enjoy, and consequently, science was brought to the masses. Whilst Fontenelle had no formal scientific training (his background was in literature and poetry) he has an uncanny knack of hitting the nail on the head when it comes to the nature of scientific enquiry, 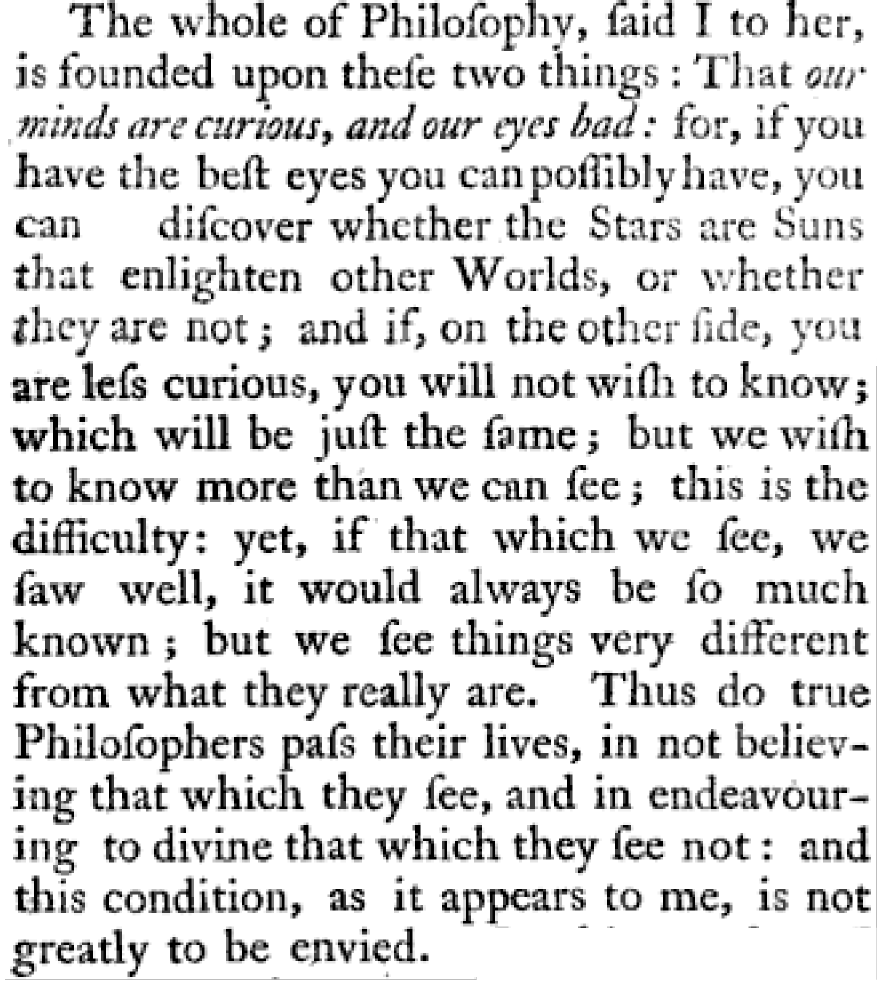 Excerpt from the first evening. For those of you that don't read 17th century english very often, those f things are s. Its actually quicker for me to grab from google books and paste it rather than type it up, but I might post transcriptions if anyone has trouble "translating it".

Now, I was going to just include a few of my favourite quotes from the book. But, as it turns out the whole book is ridiculously quotable, so I would urge you to go read it for yourself; its all freely available on google books.

Anyway, what follows are my favourite bits from the book, evening by evening.

The first evening is spent explaining to a very dubious Marchioness the Copernican model of the universe - ideas that had been around for over a century and a half and well understood in academic circles, but yet to reach a lay audience. 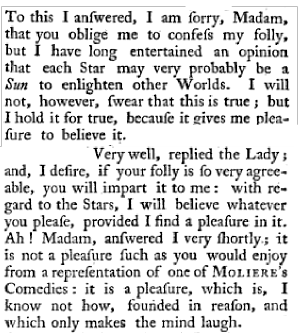 Fontenelle then proceeds to gently explain the way that the Earth is one of many planets that orbit the sun, and the sun is one of many stars, and that all of this is governed by the same forces that cause things to fall to the ground.  The philosopher chats about the whole structure of the universe, and how our view was revolutionised over the last 100 years or so by the likes of Copernicus and Newton.

The curious Marchioness lures the philosopher into debating whether there could be life on the moon. The philosopher is himself quite convinced, especially once he reveals that Monsieur Cassini has seen rivers and seas (the philosopher supposes that Cassini knows the surface of the moon so well that if plonked there he could navigate himself around as well has the philosopher can the streets of Paris).

A bit bored of hearing the philosopher's reasoning, the Marchioness wants to know what the inhabitants of the moon are like, to which the philospher replies that its impossible to tell precisely, because we don't even know what we're like ourselves. 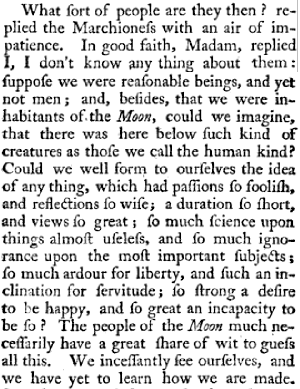 Now we're into really interesting territory. The Marchioness is dubious that there could be life on other planets, especially the moon, but the philosopher is quick to point out recent advances with microscopes have shown life to be ubiquitous, even in the most apparently barren of rocks.

Having now established that there is likely to be life on other planets, the philosopher begins to suppose what the inhabitants of the planets would be like.

I'm going to step back for a moment and remind you that this is the 17th century; a time when Copernicanism was still officially banned by the church, and so a lot of the ideas presented in his book were very heretical. Fontenelle only got away partly because of his high connections, but mostly because of the very light-hearted and jovial manner in which it's presented. He is, therefore, very careful not to bring God into the fray; he has absolutely no desire to become a martyr, only to write an enjoyable book.

So, Fontenelle makes it very clear in his preface that the inhabitants of other planets are not sons of adam, and, because of Nature's diversity, are wholly unlike men, and so escaping any theological headache resulting from how aliens might achieve salvation.

Back to the book, then. Clearly enjoying themselves, the Marchioness and the philosopher guess what the inhabitants of the other planets would be like. (Apologies in advance for the 17th century attitudes, by the way!) 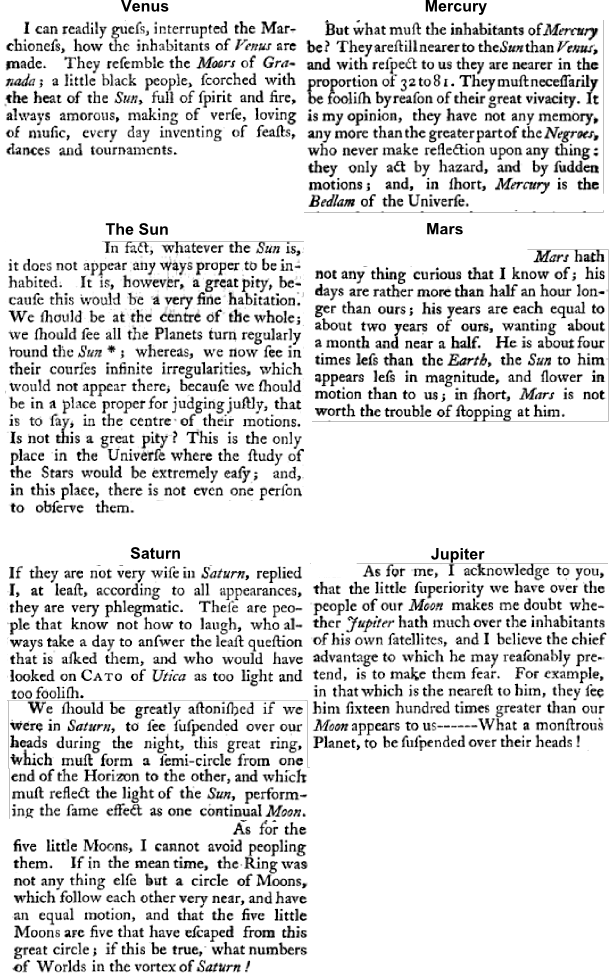 I think its strange how they are so dismissive of Mars, especially considering the utter infatuation that the world had with Mars in the 19th century!

After this, they backtrack a bit, realising that they may have stereotyped the aliens a bit, 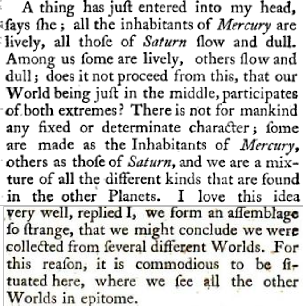 We're getting pretty far-out now. The Marchioness is overwhelmed at the concept of the vastness of the universe, (read vortex as solar system) 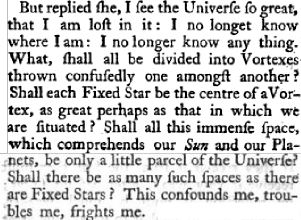 But, the philosopher has no such qualms. 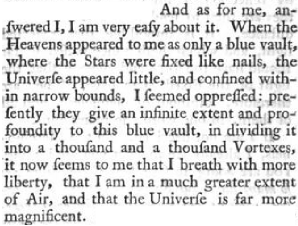 The sixth and final evening

In the final chapter, the Marchioness and the philosopher discuss the ramifications of everything that they have discussed so far, and of further advances since they last met. I don't want to ruin it by only presenting a snippet of the conversation; its a fantastic read, as a discussion a lot of the philosophical implications of there being life on other worlds, and how wise it is to delve into such matters.

Popular science as it should be

I don't think its over-hyping it to call Conversations the best popular science book in history. Its not just good-considering-its-nearly-400-years-old, its just plain good. It was incredibly popular at the time, and still is a fantastic read. Conversations should be revered because of how audacious it was: a book about aliens in a time ruled by religious dogmatism. And I can't think of many books that have changed the scientific consciousness of the world as much as this.

I will leave you with my favourite quote,