Oliver Knevitt
Does anybody remember that film, Mission to Mars? Its a good one. Basically, this band of astronauts tootle off to Mars to find their buddy, against all odds find him and, moreover, find that he seems to be doing just fine by growing tomatoes in a make-shift greenhouse. They then all decide to pop out to see the Face of Mars after he recounts having heard a weird sound near there.

(By the way, there's a bit of a spoiler alert coming, but it is 10 or so years after the film came out, so it's fair game!)

So, moving on, they go to the face and, lo and behold, the face opens, and they step inside. There they meet a friendly Martian called Louise, who teaches them about the universe.

Now, Louise has got some an interesting theory. She maintains that Mars was once densely populated and was a beautiful place, with lush wetlands and rainforests. Until, however, one day, the Martians notice that there's a whacking great big meteor on the way and leave their home, which is subsequently decimated by the impact.

Well, I'm not saying that Louise looks untrustworthy - in fact, I'm normally very much inclined to believe tall, gentle aliens with big eyes - but I'd like to test her story. Its an idea that's corroborated by many, many other books in the annals of science-fiction literature. Asides from finding fossilized trees and other direct proof, can we look at Mars and conclusively prove that there were never rainforests there?

Over the years of Martian exploration, we have amassed quite an impressive portfolio of images of the Martian surface. These images and topographic maps are perhaps our most solid sort of data that we have about Mars and we might not expect much other chemical evidence of life to survive over millions of years.

But we have got to be careful. A picture can say a thousand words, but a misleading picture can mislead thousands of people. The most famous case, of course, is the face of mars, which sadly for makers of sci-fi films such as the above, is anything but.

So probably won't surprise you to know that people have been spotting evidence of forests (or just logs) on Mars for yonks. This can be explained by...

Even topographic "proxies" for trees are not reliable. Trees do actually leave quite a distinctive trace in the lie of the land. When trees fall over, they pull up large amounts of soil, and hence trees can leave a landscape very pitted. 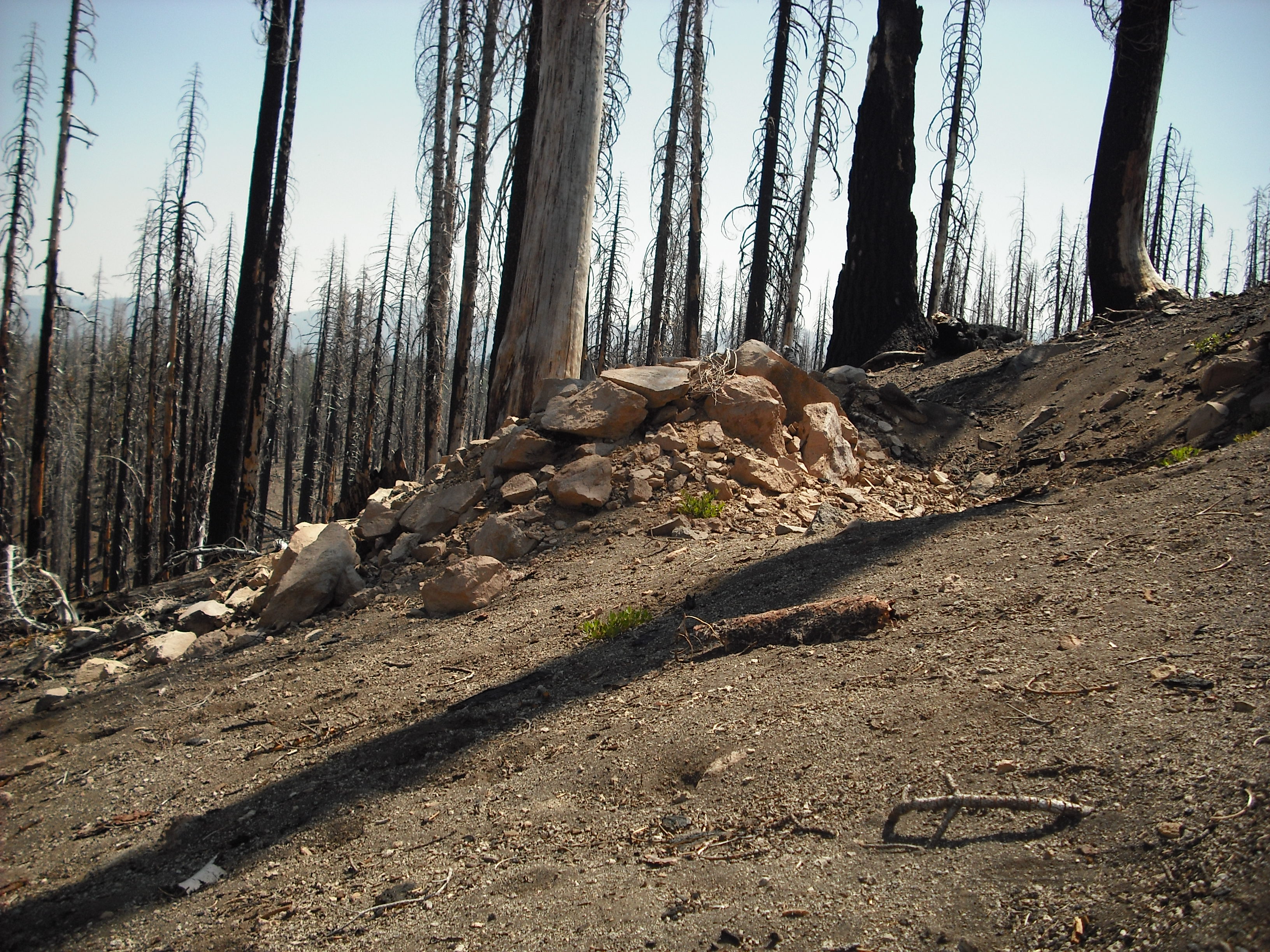 This process is called tree throw and can be quite diagnostic on some hillslopes, as can other processes, such as gopherturbation and other animal burrows. However, such pits could have a number of causes, and trees do not necessarily leave pits, and, moreover, trees don't necessarily die by falling over anyway. So this won't help us here.

To avoid falling into the trap of relying on subjective photos, then, we need to have a rigourous model of how the presense of life can subtly affect the growth of landforms over thousands and millions of years, rather than just coincidental, anecdotal examples. We need to see how life leaves its signature on the shapes of mountains, rivers, and landscapes, slowly tweaking them and nudging them as they grow. Then, we can look at Mars' landforms and detailed topography and determine whether the landscape grew in the presence of pervasive life, like on Earth. You may think that it is unwise to base models of geomorphological evolution on the Earth, give that life is so deep seated on Earth. In which case, you'd be absolutely right. Because of this problem, we will instead we use bottom up models of geomorphology, based on equations of fluid dynamics.  These are well defined and surprisingly simple laws that explain the evolution of landscapes on Earth. 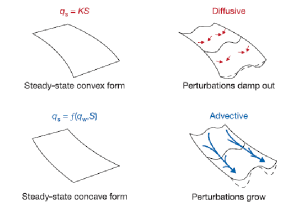 In this model1 a hillslope evolves differently depending on whether the transport is dominated by diffusion or advection (i.e. streams and rivers) of water. If you introduce some sort of dent into a diffusive hillslope, the erosion has the effect of smoothing out these pertubations, leading to an overall convex-up shaped slope. Hillslopes dominated by advective transport, however, tend to incise into the slope and amplify these pertubations into valleys. The competition between these two processes is what gives rise to our typical diffusion-dominated ridge and advection-dominated valley topography (except in places with huge amounts of rainfall and uplift like Thailand, where advection can be important even right at the top of the slope). 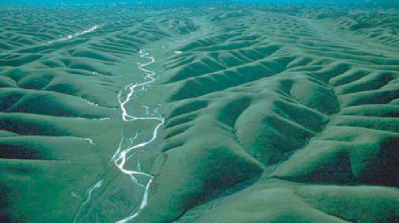 So how can the presence of life alter this model? Plants and trees act to stabilise hillslopes, breaking down rock but keeping all the particles in place, leading to the developement of a thick soil mantle. This soil mantle pushes towards more diffusive transport of water. So our first hypothesis might be that...
To test this, we need look no further than the Atacama Desert of Chile. There are parts of this place where it hasn't rained for centuries, and there certainly has never been trees. The soil has been certified by NASA2 as being 100% sterile. So we should expect sharp bedrock landscapes, with few convex, dome like mounds, right? 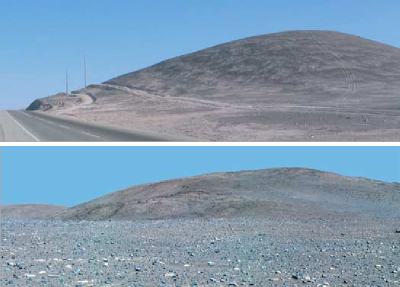 Wrong. Intensive salt weathering breaks down bedrock to produce soil, and the surface mantle receives an input of wind-blown sediment3. The resulting laplacian of elevation (a quantitative measure of hillslope ‘roundness’) of these common dome-shaped hills are almost identical in form to those formed under the influence of a thick biota. So this won't do at all. A shame, because this would signify that Mars was once covered in forests; the second image of the two above is actually of the surface of Mars - and you really can't see any major differences between that and the Atacama.

Rivers need sediment to incise; simply washing clean water over rock does little to it. Incision is generally done by sediment grains bashing against rock or on the river bed sediment. Whats more, is that incision crucially depends on the amount of sediment in the water; too little and there is negligable incision, but too much and the bed becomes sedimented.

Likewise, incision is also driven by the type of sediment. If we had no plants or trees, the subsequent stripping of the soil mantle and the emergence of bedrock on hillslopes should introduce coarser, less weathered sediment to channels. Our second hypothesis, then, is that...
Unfortunately, again, this hypothesis falls foul at the first hurdle. While the occurrence of steep, rocky channels would increase and mountains might be somewhat higher in an abiotic world, these features are not unique and would not constitute a distinctive biotic signature when compared to the world we live in. So lets try again.

Our final geomorphological clue might come from the meanders of rivers. Weak channel banks allow high flows to erode laterally, widening the channel and giving rise to multiple channel paths separated by bars (braiding). This realization has led some to propose that meandering is a signature of the influence of land plants4. Our third hypothesis, then, is that 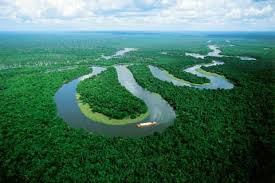 The amazon. Could meanders be a signature of rivers lined with plants and trees?

But, alas; meandering bedrock canyons have been found on both Earth and Mars5. Left is an image of a Martian river bed; whilst it does show a significant amount of lateral bank erosion and bars, there are meanders as well furthrer up - the strength here probably comes from permafrost. Whilst meandering rivers are less common on Mars, it is still not a conclusive nail-in-the-coffin for Louise's theory.

Whilst most people seem to agree that the channels and rivers on Mars come from episodic aqeuous episodes, perhaps shifts in Mars' orbit's eccentricity or obliquity, we still don't have a definitive clue from the geomorphology that we can use to say that these rivers didn't flow through land strengthened by plants and trees.

So, unfortunately, it seems to be that we can't prove Louise wrong; there seems to be no unique landform that can only develop in an abiotic world. We might be able to do a statistical survey, and use this to gauge the likelyhood, 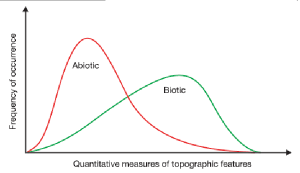 but this will never prove it conclusively.

There is one last hope though. We could instead, look at the secular effect on a planet of being burdened with life; the presence of life on Earth has long shaped its climate. A biogenic phase may have warmed the Earth in the early days (it should have been chillier due to the Chinese Restaurant hypothesis*, but it was warmer). The rise of oxygen levels roughly 2.3 Gyr ago and the corresponding loss of methane may have caused the first global glaciation. Sequestration of carbon to form carbonate deposits and periodic release upon subduction may be the primary driver in the  ice house – hot house oscillations in our climate. Vegetation, in particular, influences heat transfer, water transport and characteristics of the land surface that affect atmospheric turbulence. Without this erosion, mountain ranges would look very different because they would no longer be subject to incredibly asymmetric erosion focused on their downwind side because of upwelling of wet air. Mountain ranges such as the southern alps of New Zealand would look drastically different if it wasn't for this, and perhaps we could recognise other subtle clues globally all over Mars.

Finally, its a controversial idea, but, could it be possible that a signature of the emergence of life on Earth is plate tectonics3? Venus has no evidence of any tectonics, despite the presence of internal dynamics that triggered a magmatic resurfacing of the planet within the past 700 million years. The lack of plate tectonics means that when CO2 is belched out of volcanoes, rather than it being sucked into the oceans, precipitated (largely biologically) and dragged under continental crust at subduction zones for safe keeping like it is on Earth, on Venus CO2 just keeps increasing and increasing, meaning that Venus is hellishly hot through greenhouse warming. Here, our plate tectonics depends on an upper mantle low-viscosity zone on which plates can glide, and it has been proposed that this zone arises from injections of water at subduction zones. Today Venus is way too toasty for life and is bone dry. But in the early days, Venus and Earth may have been very similar and may have both been wet. Additionally, they would both have received the same amount of sunlight and so should have been like two peas in a pod, and developed along the same lines. Perhaps, on Earth, the development of life prevented the development of atmospheric conditions favourable to the loss of water via solar wind erosion, keeping the planet ‘wet’ and enabling plate tectonics, which has kept our climate in check ever since?

Food for thought, I guess.

Most of my arguments come from the third reference below and from my lectures from Niels Hovius in my undergraduate.