An ancient creature roams the ocean floor to this day.  It has survived over 440 million years and numerous catastrophic events in the earth’s history – ice ages, volcanic eruptions and even asteroids.   Studies of these “living fossils” as they’re often referred to, have led to Nobel prizes and revolutionized the medical industry.  Almost every person alive has directly benefitted by this creature.  And although you’ve probably come in contact with it if you’ve ever strolled along an Atlatntic Coast beach, you probably still don’t know who I’m referring to… (take a guess...and scrooooolllll down)...

The Horseshoe Crab!...bet you didn't see that one coming...

Why are these ancient arthropods so invaluable to the medical industry?  The answer lies in their blue blood.  Unlike human blood, which uses hemoglobin as an oxygen carrier, horseshoe crab blood contains hemocyanin which utilizes copper as opposed to iron as an oxygen carrier.  This results in a blue color when the blood is oxygenated.  An extract contained in the blue blood allows quick and reliable detection of bacterial contamination in intravenous drugs, like vaccines and medical devices.  In fact it’s an FDA regulation that all products be tested with horseshoe crab blood before it hits the market.

The reagent produced by the horseshoe crab utilized in testing for bacterial contamination is known as Limulus Amebocyte lysates (LAL).  Unlike more developed species, the horseshoe crab has a rather primitive immune system.  It doesn’t have a complex system of T-cells, B-cells and antibodies to fight off infection.  However considering the nature of their habitat – the ocean – the horseshoe crab has developed ways to neutralize infecting pathogens.  LAL is one of these ways.  Like in a living horseshoe crab, LAL will form a clot when exposed to live bacteria, or even parts of dead bacteria (known as endotoxin) in culture. LAL will determine if a substance or device is contaminated with bacteria or endotoxin after incubation with the substance for about an hour.  Contamination will result in a gel formation – similar to the clot made by horseshoe crabs in-vivo to neutralize infection.

Even though proper sterilization procedures should result in killing all bacterial contaminants in drugs and devices, this doesn’t necessarily mean a substance is safe.  For example, when dead, non-pathogenic bacteria are injected into the blood stream, a part of the body that is normally bacteria-free, sepsis can occur which can be fatal.  Currently the most effective way to test for such a contamination is LAL.

Before the use of horseshoe crab blood to test for bacterial contamination in pharmaceuticals, live animals, mostly rabbits, were used for testing.  Animals were injected with a dose of drug, and if they developed a fever the stock was contaminated.  Aside from being costly and ethically unfavorable, results would take days.  Horseshoe crab blood provides a timelier alternative, and crabs can be bled without harming them so they can be returned to the ocean to carry out their lives. 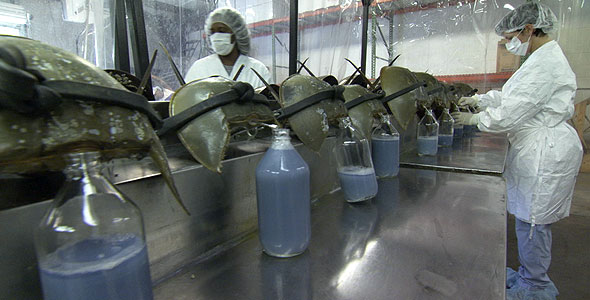 Each time a crab is bled they donate about 1/3 of their blood.  At $15,000 per quart, a single crab can give $2,500 worth of blood in a lifetime. Once returned to the ocean they will quickly replenish their blood supply, but it takes a few months for their blood cell count to recover.  Thus there are rules in effect that permit only one bleeding per crab per year.  Efforts are made to ensure the process harms as few crabs as possible, but anywhere from 3-15% of the crabs won’t survive.

Although currently the best alternative for testing for bacterial contamination in drugs and medical devices, research is underway to develop more advanced and less controversial techniques which may relieve the horseshoe crab of its philanthropic contribution to the human race, but until that time comes, next time you’re strolling on the beach and see one of these curious anxious creatures, remember to thank them.

Visit www.horseshoecrab.org for more info on this majestic creature