I have faith, therefore, I have less pain:Scientists discover brain area linked to pain resistance during religious experiences
By Catarina Amorim | September 29th 2008 06:07 AM | Print | E-mail

Religious emotions and beliefs have often been linked to a capacity to deal with pain, as those
images of Philippine men being willingly crucified during religious festivals so well demonstrates. But although changes in pain sensitivity during a religious experience are well documented, the exact psychological or/and neurological reasons of the phenomenon are unclear and, as such, have now become the aim of an investigation by a group of scientists, philosophers and psychologists from the University of Oxford.

The research, to be published in the next edition of the journal Pain, reveals for the first time that religion-associated pain resistance is linked to the activation of the brain right ventrolateral prefrontal cortex (VLPFC), an area associated with both cognitive down-regulation of pain and reassessment of the emotional meaning of an experience – for example by giving a neutral or even positive meaning to a noxious experience, and so making it much easier to cope with.

The work contributes to a better understanding of pain coping mechanisms and, consequently, can put us closer to new and better therapies for pain, but also might help to comprehend how cultural influences, such as religion, can affect the development and use of the different parts of the brain. And it does give an extra meaning to the saying “faith helps through life’s pains.”

It is known that the brain can control the way we feel about pain – the more we fear it, for example, the more unbearable it does seem - or even our unconscious perception of it as shown by the often very high pain threshold of chronic patients.

To understand how this is achieved is of major importance if we consider the devastating effects of chronic pain, not only to patients’ quality of life, but also as an economic burden to society. In an attempt to find the link between brain and pain control, Katja Wiech, Miguel Farias, Irene Tracey and colleagues from the departments of Anaesthetics, Clinical Neurology, Theology, Ethics and Philosophy at the University of Oxford and the Psychology and Religion Research Group at the University of Cambridge decided to look into a widely reported but poorly understood phenomenon - alterations of pain perception observed during intense religious experiences.

For that, the researchers used 12 practicing Catholics and 12 non-religious voluntaries, submitting both groups to an electrical shock, during which they were shown either a religious or a non-religious image, and while registering their brain activity. After this the subjects were asked to record the intensity of the pain felt during the pulse, as well as their like/dislike for each of the images. The pictures chosen – a painting of the Virgin Mary called ‘‘Vergine annunciate” by Sassoferrato and ‘‘Lady with an Ermine” by Leonardo da Vinci as the non-religious control – were edited to become aesthetically very similar. 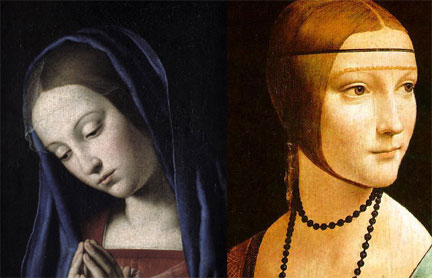 Interestingly, it was found that the religious group reported much less pain if watching the Virgin Mary during the electrical stimulus, despite the fact that both groups had, previously, been shown to have similar pain sensitivity. When commenting on the images, the Catholic subjects, as expected, expressed a higher liking for the Virgin Mary, while the non-religious group preferred the da Vinci’s print and even had negative feelings towards the Virgin.

These observations support the idea that the changes in pain perception were linked to the religious content of the Virgin image, and not the result of a preference towards an image, since the non-religious group had no pain scores’ changes while watching its preferred da Vinci’s image.

Further supporting the hypothesis, when the voluntaries’ brains were analysed during the experiment by functional MRI – which registers blood oxygen variations in the central nervous system, with the areas of high activity showing high(er) levels of oxygen –, it revealed high activation of the right ventrolateral prefrontal cortex in the religious voluntaries, again, in the presence of the Virgin. The atheist/agnostic group, on the other hand, showed no changes in that area at any moment. All individuals showed activation of the striatum, an area linked to pain perception.

VLPFC activation is known to be linked to reassessment of the emotional evaluation of experiences, so in this case, the researchers propose that the religious state, induced during the experiment with Catholics and the Virgin image, leads to a reassessment of the pain, giving it new more positive meaning and, in this way, diminishing its association with suffering. This is supported, not only by the fact that none of the non-religious subjects registered changes in the pain scoring, but also by the religious content comments of the Catholic group when describing their feelings in front of the image of the Virgin Mary: “… feeling calmed down and peaceful”, ‘‘…taken care of”, “…felt compassion and support”.

In conclusion, to Wiech, Farias and colleagues, and as consequence of an intense devout state induced by observing the religious image, the pain of the Catholics seems to be no longer associated with suffering but, instead, perfectly bearable and, in other more extreme cases probably even seen as a blessing, like the Saint Catherine of Siena (1347-1380) seems to say in a letter to her daughter:

“Very pleasing to Me, dearest daughter, is the willing desire to bear every pain and fatigue, even unto death, for the salvation of souls, for the more the soul endures, the more she shows that she loves Me; loving Me she comes to know more of My truth…”

Nevertheless, the researchers point that other experiments have reported that “pleasant” images can affect pain threshold so this effect is not exclusive of religion.

Wiech, Farias and colleagues’ work reveals, for the first time, the neurological basis behind altered pain sensitivity during intense religious experiences. Although their hypothesis of pain reassessment meaning during religious experiences needs further investigation these results are undoubtedly an important first step towards a better understanding of the neural mechanisms associated with pain control and, as such, in the direction of better pain coping treatments. And these can include, not only drugs targeting activation of brain areas associated with pain resistance, but even cognitive therapies based on the induction of similar emotional states to those produced by religion.

Miguel Farias, a Portuguese researcher and one of the authors of the research says “this is an extremely fascinating area and there is no doubt that the brain and our emotions can directly affect our physical being. After all, we all know how stress can damage our health, or, how, when we are depressed, it is so much easier to get a cold. But we know much less about the brain’s positive effects, for example, how can we explain studies that suggest that religious individuals seem to have longer and healthier lives? This is what we want to understand in order to be able to use the knowledge to improve, for example, the life of pain patients.”

A further issue raised by this discovery is how different environmental experiences – in this case the experience of faith – can affect the use and, during childhood probably even the development of the brain. In fact, neuroscience has shown that environmental experiences can increase neuronal connectivity contributing to different developments within a brain. By showing that religious feelings are directly linked to a brain area Wiech and colleagues’ experiments raise interesting issues that no doubt need to be further investigated.