Why Female Promiscuity Makes Sense – And Yeah Even Swans And Penguins Do It
By Catarina Amorim | December 2nd 2010 01:42 AM | Print | E-mail

Catarina Amorim
Contrary to what many of us would predict most female animals are not monogamous. Not even swans or penguins, those (supposedly) hallmarks of monogamy. Also surprising is the evidence that in most cases the female deliberately looks for the multiple sexual partners since female multiple mating (known as polyandry) is costly, risky and seems to bring no benefits to the females involved.

But two elegant studies in guppies by Miguel Barbosa and colleagues from the Gatty Marine Laboratory, at the University of St Andrews, Scotland are finally shedding light on the mystery by showing that the progenies of polyandrous mothers are “better” adapted, with higher reproductive success than those from monogamous females. Since mothers and offspring share many of their genes this implies that the mother’s genes will also have a higher chance of passing to future generations – the sign of success in evolution – what can start to explain why so many females practice polyandry.

The findings have implications in the way scientists see and study evolutionary processes; polyandry emerges as a potential mechanism for species evolution or even the creation of new ones, while females, no longer passive recipients of sperm, determine their own evolutionary success. The two studies, published in Environmental Biology of Fishes (1) and Journal of Evolutionary Biology (2) were done in collaboration with scientists at the James Cook University in Australia and the Universidade de Aveiro in Portugal.

The reason why female species routinely mate with several partners and, apparently, are often the ones initiating the behaviour has been under debate for years. To males multiple mating makes sense because the more descendants they have higher are the chances that their genes will survive in the future. The same does not apply to females that have a limited number of descendants in each breeding cycle. More, multiple mating spends time and energy, which are always in short supply, carries risks from predators’ attacks, disease or even sexual violence and except for the sporadic case - like when the male is eaten during copulation providing nutrients to the future mother (…) - seems to bring no direct advantages to females. In conclusion, the reason why females would pursue polyandry has been a mystery.

It is in the context that Barbosa and Magurran decided to look at polyandry in Trinidadian guppy. 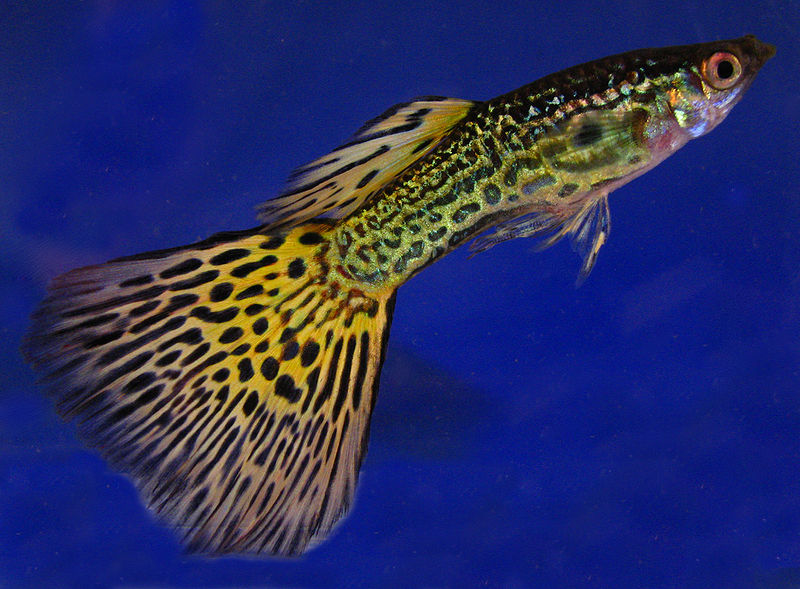 This small colourful freshwater fish is an ideal model to investigate the reasons and consequences of polyandry as it lives in a promiscuous mating system where multiple mating is common - 95% of all progeny produced in a population have more than one father. Also, despite intense sexual harassment - females receive on average one sexual attempt per minute (…) - female’s guppies are known to control paternity what have led scientists to suspect that they could also control polyandry.

In their first study, now online in the journal Environmental Biology of Fishes, Barbosa started by testing if polyandry in guppies resulted simply from sexual harassment or if it could also be a female’s choice. This was done by releasing females into an environment where they had to choose between joining a single male or a group, which could be either composed of males or of females. This allowed researchers to distinguish if joining involved social or sexual reasons. And although females start by going for the isolated male, probably to assure fecundation, after a while they prefer the group of males what meant - since sexual harassment by males was inevitable - that they were courting multiple mating. With this very simple experiment Barbosa and Magurran were able to conclude that - despite no direct benefits and sexual harassment - female guppies actively chose multiple sexual partners showing that polyandry in guppies is, at least in part, the result of female’s choice.

The next step was to understand why this occurred. Polyandry clearly gives evolutionary advantages to females or they would not pursue it, and since no direct benefits are seen then the alternative are indirect/genetic benefits. Indirect benefits occur if a female produces an offspring with high reproductive success because – since mother and descendants share genes – this increases the mother’s chance to see her genes in future generations (the mark of success in evolution).

So in the second study, out in the November edition of the Journal of Evolutionary Biology, Barbosa and Magurran, together with colleagues in Portugal and Australia, compared the offspring from polyandrous (multi-mating) and monogamous females. And with the help of a novel statistical approach they were able to find that sons from polyandrous mothers were not only more colourful (a sign of attractiveness among guppies) but, more importantly, had higher variability of looks than the offspring of monogamous mothers, While more colourful/attractive males should copulate more, high variability is linked to of one of the oldest strategies in evolution called “bet-hedging” (better know as “don’t put all your eggs in the one basket”). “The advantages of a progeny with high variability - explains Barbosa – is to permit adaptation to different conditions but also to reduce competition between brothers improving their chances to survive and reproduce”. And the production of descendants with better odds of procreating and surviving, carrying the mother’s genes to future generations, can, at last, start to explain why female guppies chose the risky and costly business of multiple mating.

Also important is the fact that Barbosa’ work introduces polyandry as a new mechanism for species to evolve, or even to create new ones, because, with polyandry as widespread as it is, this means a new look towards the evolution of many, many species. Finally and not less important – also because too often social movements root their arguments in what is supposed to be the “natural” behaviour – the work challenges the idea that females are passive recipients in a world of sexually aggressive males. As Barbosa puts: ”these results destroy the myth of the submissive female, no longer passive vessels these females are crucial to its own mating success and need to be considered as a relevant force when studying evolutionary processes”.